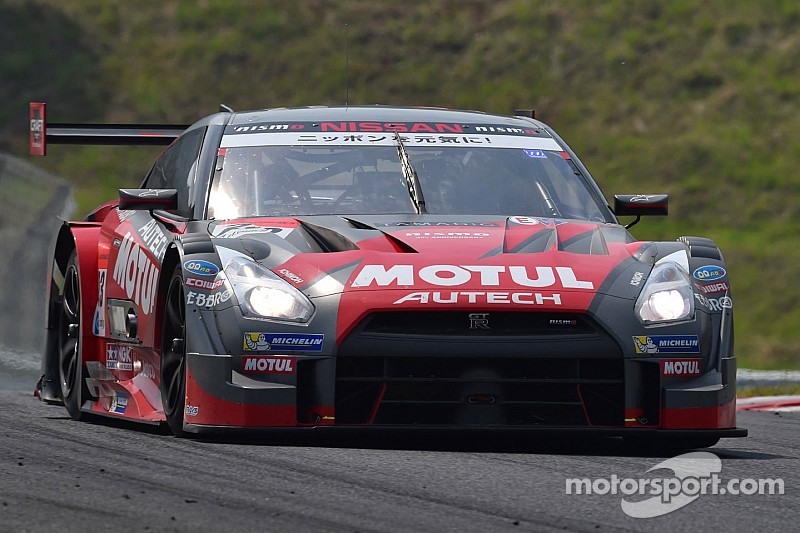 Tsugio Matsuda and Ronnie Quintarelli led the entire race to score its second win of the season.

The Motegi GT 250km Race, Round 8 of the 2014 AUTOBACS SUPER GT series, was held at the Twin Ring Motegi (lap = 4.801379 km x 53 laps) in Tochigi Pref. on November 16. In the GT500 class race, the pole position starting No. 23 MOTUL AUTECH GT-R driven by Tsugio Matsuda and Ronnie Quintarelli led the entire race to score its second win of the season in a runaway victory, and in doing so, came from behind in the ranking to win the series championship title as well.

In the GT300 class, the No.11 GAINER DIXCEL SLS driven by Katsuyuki Hiranaka and Bjorn Wirdheim were the class winners. The GT300 class Drivers Championship title went to the No. 4 GOODSMILE HATSUNE MIKU Z4 drivers Nobuteru Taniguchi and Tatsuya Kataoka by hanging on to finish 3rd in this final race.

At the start of the race, Ronnie Quintarelli in the pole-sitting No. 23 MOTUL AUTECH GT-R got a good start to take the lead. Following him in second position was No. 46 S Road MOLA GT-R (Masataka Yanagida) and in third the No.18 Weider Modulo NSX CONCEPT-GT (Naoki Yamamoto).

These three machines, all running on Michelin tires, pulled away from the pack in the early going. Behind them, when the No. 12 CALSONIC IMPUL GT-R (Joao Paulo De Oliveira) tried to pass the No. 36 PETRONAS TOM’S RC F (James Rossiter) by taking the in side on the S-curve of the opening lap, it resulted in a collision between the two machines.

When we got the pole position in the qualifying it felt like the first step toward the championship, and we knew that in the race today our biggest opponent would be the possibility of machine trouble or accidents.

The CALSONIC IMPUL GT-R was forced off the track, resulting in a big loss in position, while the PETRONAS TOM’S RC F suffered damage in the right front and became unable to maintain a fast pace. In the meantime, the MOTUL AUTECH GT-R had pulled away to a big lead. When it came time to make its routine pit stop, No. 23 had built up a safe margin of nearly 40 seconds.

Following in 2nd place was the No. 37 KeePer TOM’S RC F (Daisuke Ito/Andrea Caldarelli) that stood in 2nd place in the season standings going into the race. In the first stint, Caldarelli had charged hard to move up to 4th position.

When the S Road MOLA GT-R (Masataka Yanagida) was given a 10-second stop penalty for passing under the yellow flag, and the Weider Modulo NSX CONCEPT- GT (Takuya Izawa) had its engine fail to start after the routine pit stop, these mistakes by the rivals enabled Ito to move up to 2nd position in the second half of the race. Ito tried to catch the leading MOTUL AUTECH GT-R (Tsugio Matsuda) but couldn’t muster a fast enough pace to take the win. As a result, the MOTUL AUTECH GT-R won the race and came from behind in the standings to win the season’s Drivers Championship as well.

This gave the NISMO team its first Drivers title since 2008. This was Quintarelli’s third title, putting him in a tie for most titles in the GT500 class. For a happy Matsuda, it is his first title.  In the GT300 class, the No. 11 GAINER DIXCEL SLS (Katsuyuki/Hiranaka Bjorn Wirdheim) started from pole position and went on to score a runaway victory. This win put the No. 11 team in a tie in the ranking for the Drivers Championship with the No.4 GOODSMILE HATSUNE MIKU Z4 (Nobuteru Taniguchi/ Tatsuya Kataoka), but the title went to the GOODSMILE HATSUNE MIKU Z4 team based on more race wins during the season. (Spectators: 32,000)

Tsugio Matsuda (No. 23 Motul Autech GT-R):  “This weekend, the machine was running in good condition from the first runs on Friday. When we got the pole position in the qualifying it felt like the first step toward the championship, and we knew that in the race today our biggest opponent would be the possibility of machine trouble or accidents. I drove today with a concentration on not letting anything like that happen. In the end, when there was not trouble and we were able to run well, it was a runaway victory. This victory wasn’t accomplished solely by the drivers but also by the machine and the tires. It was truly a successful team win.”

Ronnie Quintarelli (No. 23 Motul Autech GT-R): “The car was really fast today and the tires held out well to the end. On my stint, I was able to push hard through to the end. That may it feel good and unstrained for me, and I watch the pole on each lap to check the position of car No. 36 (PETRONAS TOM'S RC F). So, when I saw on the board the announcement of the penalty against car No. 46 (S Road MOLA GT-R) I was really excited. Besides that, however, I believe it was exactly as Tsugio [Matsuda] just said: this win today and the championship title are truly a victory by the entire team, by Michelin, by everyone.”

Katsuyuki Hiranaka (No. 11 Gainer Dixcel SLS ): “The car was in good condition from Friday. Even though you may say that we were competing for the title, the fact is that there was no chance for us if we didn’t win today, so that is the only thing we were shooting for. We were able to win because of the wonderful performance of the team, the machine, and of course the tires. But, since we didn’t get the championship title, there are still some mixed feelings and it is hard to be completely happy. Still, unlike last year when we won this race but didn’t get any title, this time we at least got the Team Championship title. I want to think positively and consider this one step forward.”

Bjorn Wirdheim (No. 11 Gainer Dixcel SLS ): “I am very happy that we one today’s race. In the qualifying yesterday we got the pole position, but I still had some worries today about whether we could win the race. So, I am a bit relieved that we were able to achieve our big goal today of winning the race. Today, the team did a fantastic job. By getting the Team Championship title I feel we have paid them back for all they have accomplished. It is a shame we didn’t get the Drivers Championship, but I’m glad we got the Team title. I am very proud to have been able to compete with this team over this year.”