Veteran Tachikawa claims a hard-fought victory in the opening round 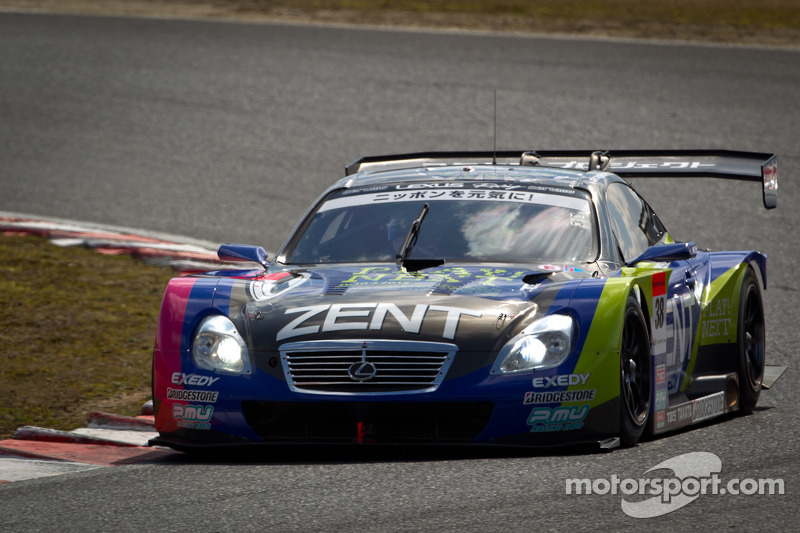 The Okayama GT 300km Race, Round 1 of the 2012 AUTOBACS SUPER GT, took place at the Okayama International Circuit (one lap 3.703 km x 82 laps) in Okayama Pref. on April 1st. The GT500 class race came down to a dramatic final-lap battle that ended with the pole-starting ZENT CERUMO SC430 driven by Yuji Tachikawa and Kohei Hirate emerging victorious in the 2012 season’s opening round. 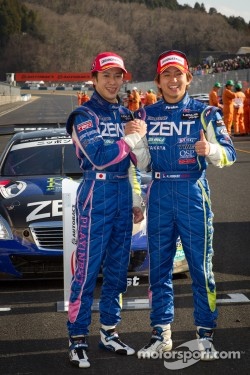 After a Saturday qualifying plagued by on-and-off rain, the weather on race day at Okayama saw clouds overhead but no fear of rain, which gave the teams a chance to go head to head on a dry track with no concern about the weather in this, the first race of the season. Last year, the Okayama race distance had been reduced to 250 km, but this time it was again a long-distance 300km competition.

The race started on schedule at 14:00. In the pole-sitting ZENT CERUMO SC430, Kohei Hirate got a good start to lead the race in the early going. But, he was eventually passed by Satoshi Motoyama in the MOTUL AUTECH GT-R and dropped to 2nd position. After the routine pit stop, however, the MOTUL AUTECH GT-R’s second driver, Michael Krumm, had trouble keeping up the pace. Krumm was passed in succession by Naoki Yamamoto in the RAYBRIG HSV-010 and Tachikawa in the ZENT CERUMO SC430. This brought the race down to a one-on-one dual between Yamamoto in the RAYBRIG and Tachikawa in the ZENT.

Over the final stages of the race, Tachikawa chased Yamamoto in a fierce nose-to-tail battle that saw the lead change hands twice over the final two laps. Yamamoto was back in the lead as the race entered the final lap, but the veteran two-time champion Tachikawa was waiting to strike when the younger Yamamoto gave him the chance. Finally finding an opening to slip past his younger opponent, Tachikawa went on to take the victory.

This was Tachikawa’s 13th victory in the GT500 class and teammate Hirate’s second. For the Lexus SC430 it was the 13th GT victory.

In the GT300 class, it was the GAINER DIXCEL R8 LMS (Audi) driven by Tetsuya Tanaka and Katsuyuki Hiranaka, starting from third position on the grid, that came on very fast in the final stages of the race to score a come-from-behind victory over the pole-starting ENDLESS TAISAN 911.

The Audi R8 LMS Ultra is competing for the first time in SUPER GT this season, and impressed all by winning its debut race. 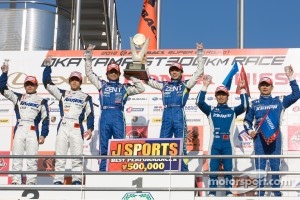 No. 38 ZENT CERUMO SC430 [GT500]
Yuji Tachikawa: “Today’s race had me pushing and concentrating 100% in each and every lap. When we lost the lead I was worried that it was going to be tough to come back. I got passed and lost the lead just before going into the final lap, but I didn’t give up and kept pushing hard. At the end it was simply a battle of pride and will power. I am very glad that we were able to win here at the opening round in Okayama where the SC430 teams have often had a hard time in the past. The next round is at Fuji, where the SC430 has always done well. Even though we will be carrying a weight handicap because of today’s win, I want to try to make it two victories in a row there.”

Kohei Hirate: “To tell the truth, this victory has a bit of a bitter taste for me. Thanks to Tachikawa-san we were able to get the pole position and win the race today. As a result we were able to start the season off well like this, unlike in previous years. We hadn’t been able to run enough test laps on a dry track, so I was just out there in my stint in the first half of the race to push as hard as I could to see how fast and how far I could run in the lead, so that we could figure out how to manage the tires and the overall race. I was just hoping that I could be among the leaders when I turned the wheel over to Tachikawa-san. That is all I had in mind as I drove today.” 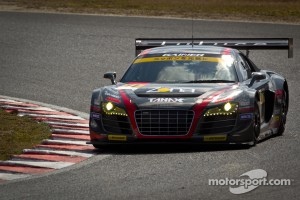 No.11 GANER DIXCEL R8 LMS [GT300]
Tetsuya Tanaka: “Last year we were always finishing 2nd. Although we won the Fuji Sprint Cup the year before last, during the regular season we didn’t have a single win. So, this is our first regular season win since changing to Dunlop tires. So, I am just simply very happy to get this win. Also, like last year, the team prepared us with a good machine but I had a crash in the preseason test that put an extra load of work on our mechanics. I hope that today’s win has made up for all that. We have a faster machine this year and that made it a lot more fun to race today.”

Katsuyuki Hiranaka: “In last year’s opening round we ended up in 2nd place because of a spin I made. So, I was determined to make up for that today for that today. For that reason I am especially happy about this win. I was sure that it would come down to a one-on-one battle with the Porsche (No. 911) today, so after I took the wheel from Tanaka-san I was expecting to push hard get on its tail right away. But, the refueling had taken longer than usual and I found myself farther behind than I had anticipated. Still, the tires performed well and I was able to keep pushing until I got on the Porsche’s tail and then go past it to in.”