Toyota swept the top five positions in its first SUPER GT race with the new GR Supra at Fuji Speedway, as TOM'S pair Nick Cassidy and Ryo Hirakawa took a commanding victory in the season opener.

Having taken a surprise pole earlier in the day in qualifying, Cassidy and Hirakawa were never headed during the 66-lap contest, surviving two safety car restarts en route to their fifth GT500 victory as a duo at the wheel of the #37 TOM'S GR Supra.

Cassidy took the start and resisted the Hondas of Nirei Fukuzumi and Naoki Yamamoto in the early exchanges before the first caution period was called after a first-lap clash between the #12 Impul Nissan of Daiki Sasaki and the #64 Honda of Takuya Izawa.

At the restart on lap 6, Cassidy fended off an attack from Fukuzumi's ARTA NSX-GT before pulling away and building a margin out front. By lap 10 Cassidy had escaped to the tune of four seconds, as Fukuzumi held up the Kunimitsu Honda of Yamamoto and the second TOM'S Supra of GT500 rookie Sacha Fenestraz.

Yamamoto finally cleared Fukuzumi at the start of lap 12, with Fenestraz following through but then losing time to his teammate stuck behind Yamamoto.

By the time Fenestraz found a way by on lap 23, Cassidy's lead had grown to almost 12s, and after the New Zealander pitted to hand over to Hirakawa on lap 31, his teammate enjoyed an advantage of 18s over the sister TOM'S Supra, now with Yuhi Sekiguchi at the wheel.

A second safety car period was called on lap 37 after Nissan driver Tsugio Matsuda tipped one of the marque's GT300 runners, the #360 Tomei Sports car, into a spin, leaving it stranded in the middle of the track.

That wiped out the #37 car's lead, but when action resumed Hirakawa had no problem fending off teammate Sekiguchi, and finally took the chequered flag by 5.1s.

Sekiguchi then had to turn his attentions to fending off a hard-charging Sho Tsuboi in the #14 Cerumo Supra (shared with Kazuya Oshima), which had steadily risen up the order from 11th on the grid, but Sekiguchi was able to hang on to complete a TOM'S 1-2.

As the Hondas faded in the second half of the race, Toyota was able to sweep the top five positions in the first race with its new car.

Tadasuke Makino took over the Kunimitsu NSX-GT from Yamamoto and took the restart in third, but soon fell prey to both the Cerumo Supras on successive laps, with Hiroaki Ishiura and Yuji Tachikawa taking fourth place in the #38 car.

Makino was then caught by Kenta Yamashita, Heikki Kovalainen's replacement in the #39 SARD Toyota, for fifth place with four laps to go, finally finishing as the top Honda in sixth.

Nissan likewise suffered a race to forget, with the #3 NDDP/B-Max Racing car of Katsumasa Chiyo and Kohei Hirate coming home in seventh place ahead of the #8 ARTA Honda, which dropped down to eighth late on in the hands of Tomoki Nojiri.

Honda's other Bridgestone runner, the #17 Real Racing car of Bertrand Baguette and Koudai Tsukakoshi, was forced to retire at around half-distance with an apparent engine issue.

Toyota swept both classes as the Saitama Toyopet Green Brave team took victory with its brand-new V8-engined GR Supra in the GT300 class. 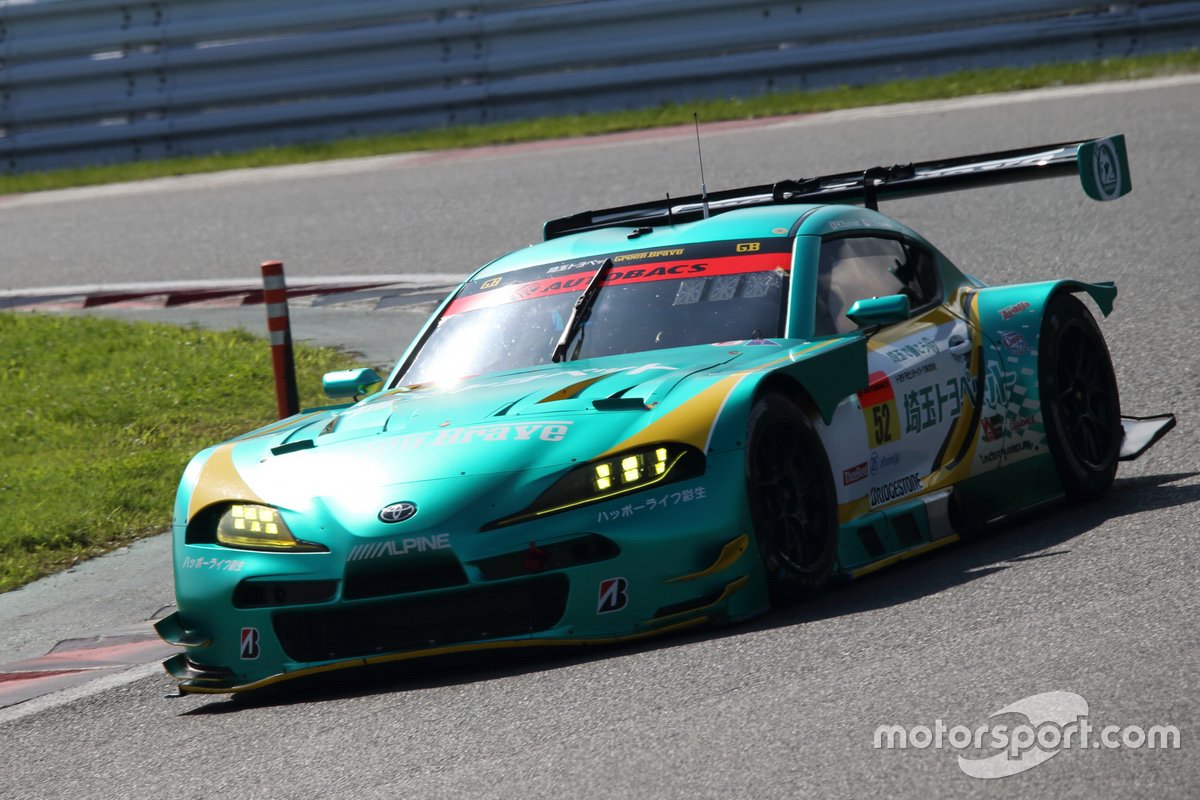 Hiroki Yoshida and rookie Kohta Kawaai triumphed by three seconds ahead of the #11 Gainer Nissan GT-R NISMO GT3 of Katsuyuki Hiranaka and Hironobu Yasuda, while the podium was completed by the best of the 'Mother Chassis' cars, the Team Mach Toyota 86.

The pole-sitting LEON Racing Mercedes-AMG GT3 had controlled the first part of the race but was delayed by a slow pitstop, consigning it to sixth behind two more Nissans, the #56 Kondo Racing car and the second of the Gainer-run entries, the #10 car.