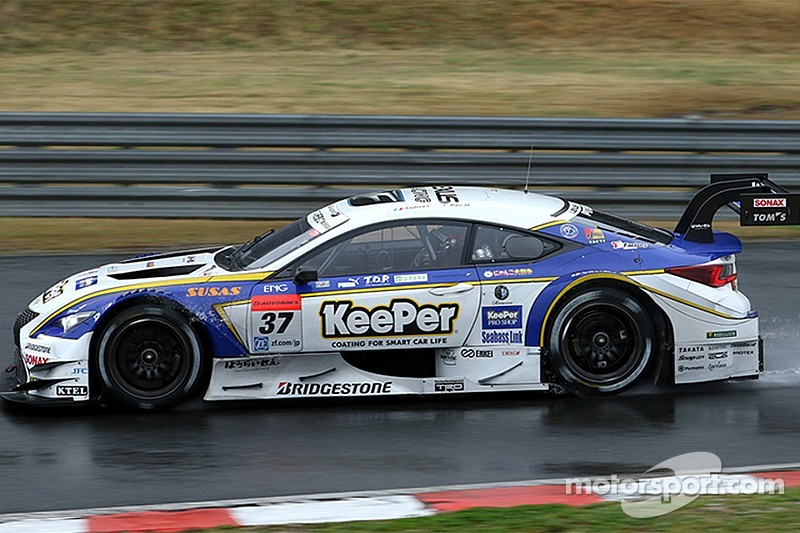 Andrea Caldarelli and Ryo Hirakawa braved difficult conditions at Okayama to take the first Super GT win of the season.

Despite starting from pole, and ultimately winning comfortably, it wasn't a lights-to-flag for the KeePer TOM'S Lexus RC F. Caldarelli made a lightning start in the wet conditions, but as the track started to dry out found himself dropping spots.

When the rain returned, so did the #37's pace, and by the time the pit-stops had shaken out the car was back in second. That then became the lead on Lap 72 when Hirakawa breezed past Takuya Izawa in the Raybrig NSX, before cruising to victory.

"The first part was quite difficult," said Caldarelli. "I pushed, I tried to get a big gap, but after that we went down with the tyres. When it rained again, the pace was back.

"Ryo did a good job at the end. I'm really happy for everyone, we deserve this win."

Izawa managed to hold on to finish second for him and co-driver Naoki Yamamoto, but only just. The Honda had to hold on a late charge from the Zent Lexus of Yuji Tachikawa and Hiroaki Ishiura, who went within metres of making it a Lexus 1-2 at the finish.

On a day that clearly favoured the Bidgestone tyres, the Arta NSX of Kosuke Matsuura and Tokomi Nojiri finished fourth, ahead of the Denso Lexus of Kohei Hirate and series debutant Heikki Kovalainen. The ex-F1 driver had a lot to do in his first stint in a Super GT car; after a call to switch to intermediates went wrong, the #39 had to make an extra stop, leaving Kovalainen on the fringe of the Top 10 just after half-race distance.

But a well measured drive, and some help in the form of Oliver Turvey losing ground late in the race after making a barn-storming start to his stint in the Drago NSX, saw Kovalainen come out of the race with a decent result.

In the GT300 class, the race was won by the Toyota Prius of Koki Saga and Yuichi Nakayama, ahead of the Arta Honda (Shinichi Aoki and Koji Yamanishi) and the Audi R8 of Richard Lyons and Tomonobu Fujii.