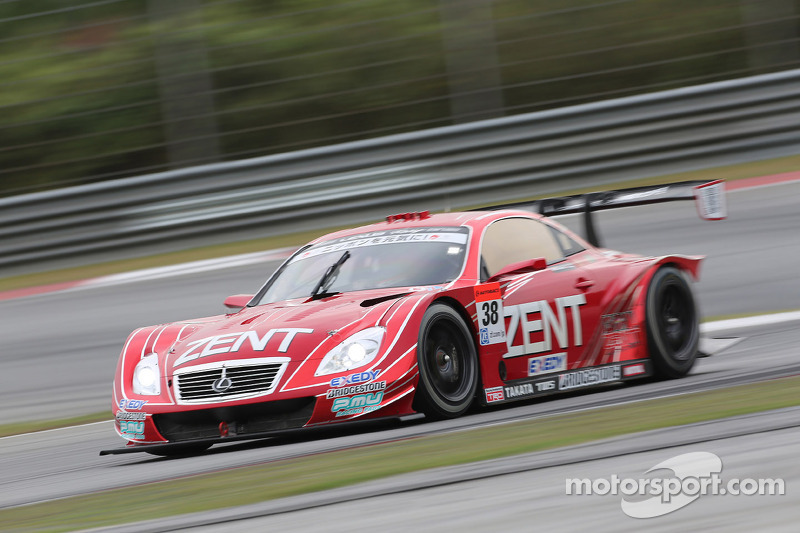 ZENT CERUMO SC430 gets its first win of the season. BMW conquers in the GT300 class

The FUJI GT 300km race, Round 6 of the AUTOBACS SUPER GT, took place at Fuji Speedway (one lap 4.563km x 66 laps) in Shizuoka Pref. on Sept. 8. In difficult conditions with rain drizzles on and off, the winner of the GT500 class was the No. 38 ZENT CERUMO SC430 driven by Yuji Tachikawa and Kohei Hirate. The GT300 class winner was the No. 4 GSR HATSUNEMIKU BMW driven by Nobuteru Taniguchi and Tatsuya Kataoka.

On race day at Fuji Speedway there was rain in the morning, but by noon the rain had stopped and the track was mostly dry by the time of the race start at 14:00. In these relatively good track conditions, the No. 38 ZENT CERUMO SC430 driven by Kohei Hirate made a good start from pole position. The ZENT CERUMO SC430 ran in the lead with its fellow Lexus car, the No. 37 KeePer TOM'S SC430 driven by Andrea Caldarelli, in tow until the Safety Car came out to control the race after machine trouble caused a machine to crash on the 21st lap. During the time it took to clear up the aftermath of the crash, the ZENT CERUMO SC430 had lost most of its margin of lead. When it became possible for the teams to make pit stops, the ZENT CERUMO SC430 and most of the other cars in the lead group made their routine pit stops and changed drivers. Because some teams didn’t make their routine stops, however, the ZENT CERUMO SC430 had given up the lead by the time it returned to the race with Yuji Tachikawa now at the wheel, and what’s more, it was hit by another car in its first lap out of the pit and ended up in 5th position as a result. But knowing that not getting the win in this race would effectively end the ZENT CERUMO SC430 team’s title chances, Tachikawa began a hard charge through the pack amid constantly changing conditions as rain began to fall on and off. Finally, by the 43rd lap of the race, Tachikawa regained the lead. From this point on, Tachikawa would face a tough challenge from the No. 17 KEIHIN HSV-010 (Koudai Tsukakoshi) but in the end he lived up to his reputation as a mater at the Fuji course and always a strong finisher by fending off the challenge to give his team its first victory of the season.

This was the second win of the season for the LEXUS SC430 and its 18th overall. For Tachikawa it is his 15th GT500 career win, bringing him into a tie for most wins by a driver. For Hirate it was his fifth win.

In the GT300 class, the No. 4 GSRHATSUNEMIKU BMW driven by Nobuteru Taniguchi and Tatsuya Kataoka started from 5th position on the starting grid and took advantage of some fast pit work just after the Safety car came out and succeeded in taking the lead among the cars that had made quick pit stops. After that, the BMW’s second stint driver Taniguchi did a magnificent job of handling the slippery conditions after rain began to fall. In the end, he scored the team’s first win of the season with a massive 47-second lead over 2nd place at the finish.

This was the fifth win overall for the BMW Z4 in GT300 class competition. For Taniguchi it is his 13th win, and for Kataoka it is his sixth.

Yuji Tachikawa: “We didn’t score any season points in the last three races, which put us in about the worst position we have ever experienced. But the team didn’t let this get them down at all, and TRD continued to work hard with us, and as a result, this time the machine was in magnificent condition. For this, I want to thank the team and TRD. When the Safety Car came out, I thought, “Not again!” But, I was able to run well to the end. With this win, we still have a chance to stay in the title race. But, since our goal is nothing less than the title, it is too early to celebrate. We are going to win the next two races, win the title and then we will celebrate.”

Kohei Hirate: “The last three races were really frustrating because the car felt good but we couldn’t get the results we should have. But, as a result we were able to come to Fuji with only a small weight handicap, so I thought, “This is our chance.” We continued to talk within the team and with Bridgestone about things we could do. When we no-pointed in the last race, I thought our season title chances were now slim. So I came into this race with a new attitude, thinking that we had nothing to lose, and in the end we won.”

Nobuteru Taniguchi: “This time the machine was in good condition, but to be honest, I didn’t think we would win. But, the tires were also great, and we were able to qualify 5th. More than anything, the team’s perfect timing in making the pit stop when the Safety Car came out was a decisive factor. Then, when some light rain began to fall in the second half of the race, the track condition wasn’t bad enough to warrant a change to wet tires, but it became slippery enough to make it difficult on the slick tires. So, I decided that this was where I had to do my best. Since this is our first win in a while, I am just very happy.”

Tatsuya Kataoka: “I am relieved that we were finally able to win after some time with no wins. Although I started from 5th position on the grid, I was soon able to move up to 3rd place, and from there I was able to hold that position running at the same pace as the leader. But when the Safety Car came out, the command from the pit to make our pit stop came with absolutely perfect timing and I was able to get in just right. That was a big factor leading to this win. From here on we will have less of a weight handicap and we will be aiming to win both of the remaining races.”