NISMO pair Ronnie Quintarelli and Tsugio Matsuda scored their first SUPER GT victory of the season at Suzuka as Nissan locked out the top three positions in the GT500 class.

Matsuda in the #23 car made the race-winning overtake at the hairpin on fellow Nissan/Michelin driver Kohei Hirate in the #3 NDDP/B-Max Racing GT-R on lap 41 of 52, completing a comeback charge after losing ground in the pitstop phase to clinch a third straight Suzuka win.

The #24 Kondo Racing Nissan finished third to make it a first Nissan podium lockout since the Autopolis round in 2014.

Naoki Yamamoto and Tadasuke Makino took an important fourth place in the #1 Kunimitsu Honda NSX-GT, catapulting Yamamoto to the head of the drivers' standings, while the #36 TOM'S GR Supra (Yuhi Sekiguchi/Sho Tsuboi) completed the top five at the end of a weekend to forget for Toyota.

The two Dunlop-shod Hondas that started on the front row got away cleanly at the start as Takuya Izawa in the pole-winning #64 Nakajima NSX-GT led Toshiki Oyu in the Mugen car.

But Izawa's time in the lead was short-lived as he suffered a heavy crash at the chicane towards the end of the fifth lap following what appeared to be brake failure, prompting a safety car period.

Oyu led at the restart on lap 12 from Quintarelli in the Nissan that had started third, with Daiki Sasaki running third in the Kondo Nissan and Katsumasa Chiyo in the #3 NDDP/B-Max GT-R fourth.

But the Dunlop-shod Mugen car was unable to get away from the head of the field, and the cars that made their mandatory pitstops earliest were the ones that gained the most ground.

Oyu pitted on lap 20 to give the Mugen car to Ukyo Sasahara, but it was the #3 Nissan of Chiyo  - despite pitting on the same lap - that emerged from the pitstop phase with the advantage ahead of the #12 Impul Nissan of Kazuki Hiramine (started by Nobuharu Matsushita).

NISMO's flagship #23 car lost ground as Quintarelli left it until lap 24 to pit to hand over to Matsuda, who emerged third behind the NDDP/B-Max car, now with Hirate at the wheel, and Hiramine's Impul machine but ahead of the Mugen Honda of Sasahara.

As Hirate stretched his lead at the front of the field, Hiramine was soon passed by a charging Matsuda, who went on to make short work of the five-second buffer built up by Hirate.

With a few spots of rain falling as the race entered its closing stages, Matsuda made the decisive move at the hairpin on lap 41, as the lapped Kondo Nissan GT300 car opened an opportunity for a lunge.

From there, Matsuda in the #23 car was untroubled on his way to a symbolically significant 23rd GT500 win and a 17th for Quintarelli, the duo also picking up their third win at Suzuka in a row. 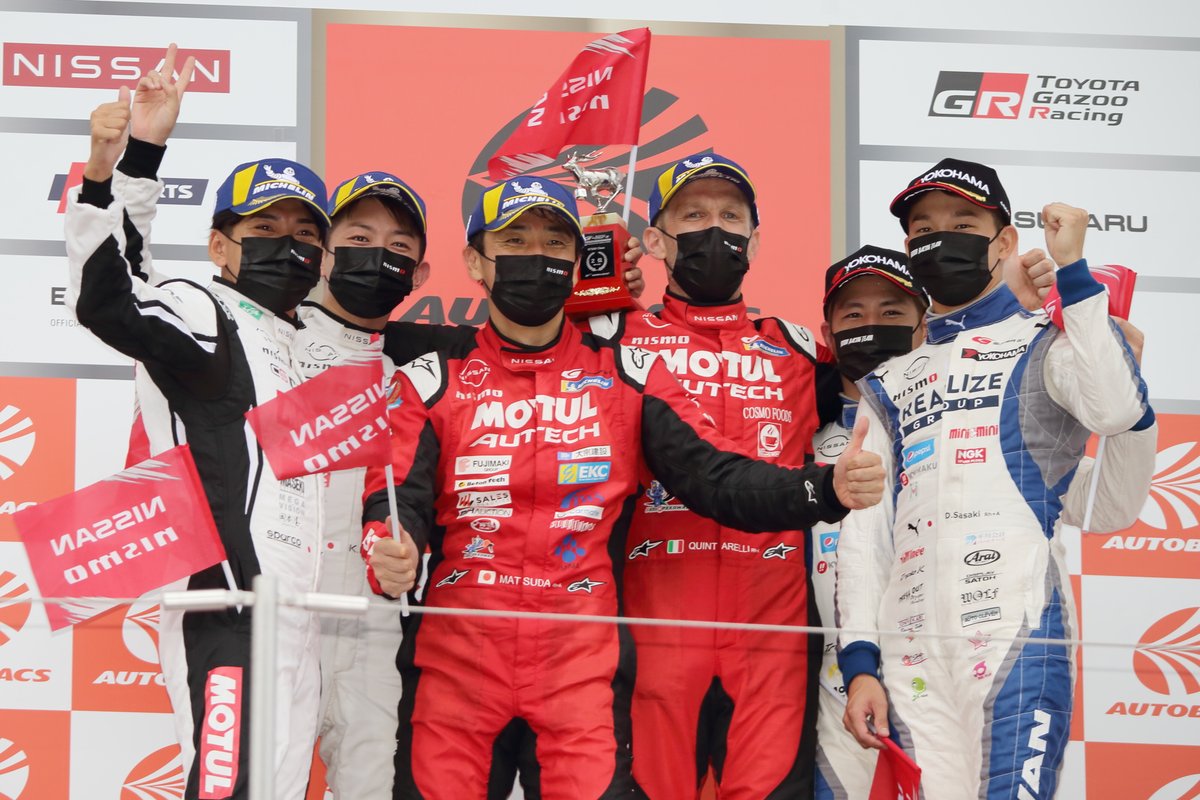 Hirate and Chiyo scored their best result as a duo in second, but Hiramine was powerless to resist the Kondo Nissan (now in the hands of Mitsunori Takaboshi) in the fight for third.

Hiramine then lost further places to both Yamamoto's Kunimitsu Honda and Tsuboi in the TOM'S Toyota - despite both of those cars running the stage one fuel restrictor - bringing home the Impul machine in sixth.

The Real Racing Honda (Koudai Tsukakoshi/Bertrand Baguette), likewise with the fuel restrictor, banked valuable points for seventh place after coming out on top in a late battle with the Cerumo Toyota (Yuji Tachikawa/Hiroaki Ishiura).

With the championship-leading Rookie Racing Toyota (Kazuya Oshima/Kenta Yamashita), the only car in the field using the stage two restrictor, failing to score points for a second race in a row, Yamamoto is now five points clear of Oshima and Yamashita at the head of the drivers' standings.

Heikki Kovalainen picked up a pitlane speeding penalty on his way to 14th place in the SARD Toyota he shares with Yuichi Nakayama.

The GT300 class was won by the #244 Max Racing Toyota GR Supra of Atsushi Miyake and Yuui Tsutsumi, the team taking its first SUPER GT win in just its fourth race running its new car. 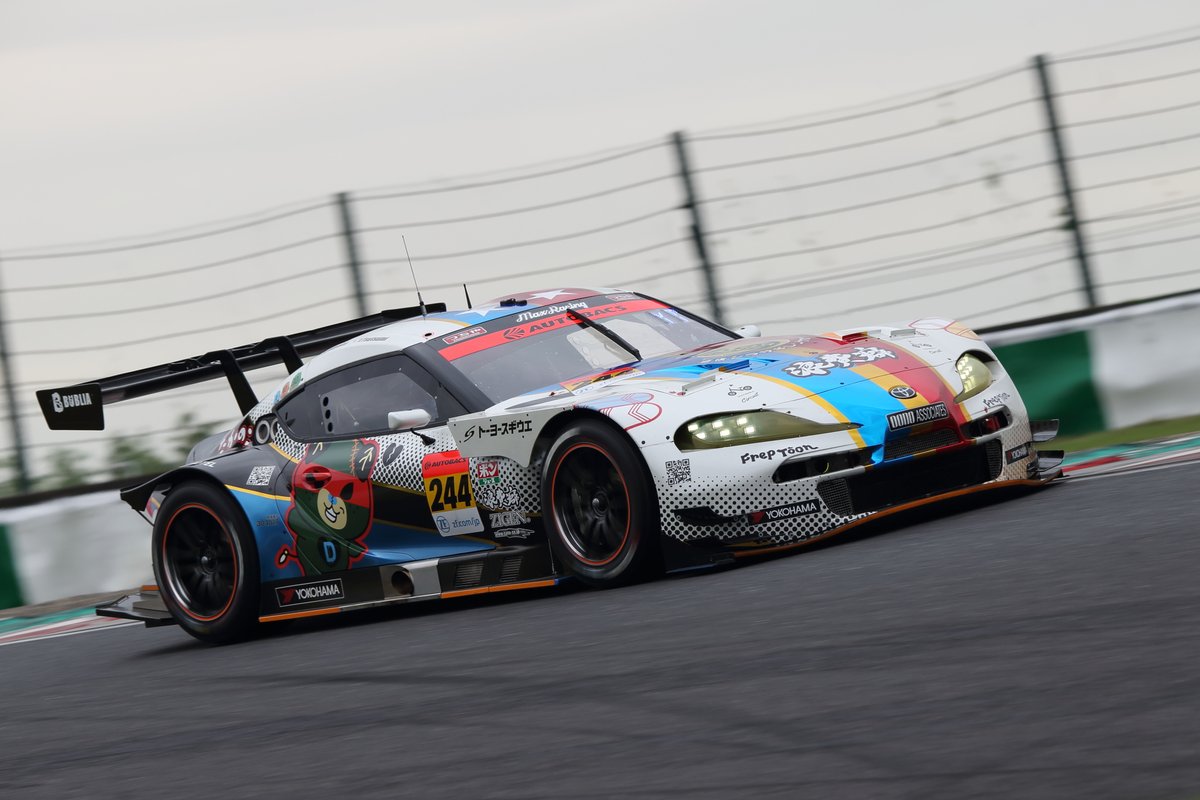 From third on the grid, Miyake quickly moved up to second behind the pole-winning Subaru BRZ of Hideki Yamauchi, and then passed to snatch the lead shortly after the safety car period.

But it was the Team Mach Toyota 86 MC that had slipped from second to fourth early on that vaulted into a net lead after the pitstops ahead of the Max Racing Supra of Tsutsumi thanks to a no-tyre change stop.

Reiji Hiraki was at the wheel of the Team Mach car for the second stint, taking over brother Yuya, but was passed by Tsutsumi and the #88 JLOC Lamborghini Huracan GT3 of Kogure in quick succession.

While Kogure went on to take second in the Lamborghini started by Yuya Motojima, Hiraki then lost further ground with a spin at Degner, gifting the final spot on the podium to the Goodsmile Racing Mercedes-AMG GT3 driven by Nobuteru Taniguchi and Tetsuya Kataoka.

The works R&D Sport-run Subaru struggled for race pace and the car shared by Yamauchi and Takuto Iguchi trailed home in 10th place for a single point.

The two cars that jointly led the standings coming to Suzuka, the LEON Racing Mercedes and the #11 Gainer Nissan, both failed to score.