The Impul Nissan Z of Bertrand Baguette and Kazuki Hiramine scored an unlikely win from 15th and last on the grid in Sunday's fifth round of the SUPER GT season at Suzuka.

In an action-packed 450km race, a well-timed safety car period put Hiramine in a position to challenge for the win in the final stint, the Japanese driver having taken over from Baguette at the first round of pitstops.

After surviving a wild moment with the NISMO Nissan of Tsugio Matsuda in the battle for second, for which Matsuda was penalised, Hiramine was able to catch up with the Real Racing Honda NSX-GT of Koudai Tsukakoshi, who had taken the lead when a safety car mixed up the order.

With around five laps to go, Hiramine started closing in on Tsukakoshi at a rate of over a second a lap, and on lap 75 of 77 the Impul Nissan dived ahead at the hairpin to grab the lead.

Such was Tsukakoshi's loss of pace in the #17 car he shares with Nobuharu Matsushita that he dropped 6.6 seconds to Hiramine in the remaining two laps until the chequered flag, only just staving off the SARD Toyota GR Supra shared by Yuichi Nakayama and Yuhi Sekiguchi.

The pole-sitting NISMO Nissan of Matsuda and Ronnie Quintarelli came home fifth after its drive-through penalty, gaining a place on the last lap when Naoki Yamamoto crashed at 130R in the Team Kunimitsu Honda.

Impul's victory looked unlikely in the opening stint as Baguette was unable to make much progress from the back of the field, getting stuck behind the #37 TOM'S Toyota of Sacha Fenestraz for a number of laps before finally making the move.

Baguette was among the last of the GT500 drivers to stop, leaving it until lap 33 to hand over to Hiramine, who was suddenly vaulted up the order when the safety car came out on lap 49 following a crash for the Max Racing Toyota GR Supra GT300 car at 130R.

Along with the SARD Toyota of Nakayama, Hiramine was already in the pits when the safety car was deployed and the pits closed, while the leading four cars - led by the Mugen Honda of Toshiki Oyu - found themselves still having to make their second stops after the race resumed.

Tsukakoshi, who had taken over from Matsushita in the Real Honda on lap 29, assumed the net lead at this point, having been running third behind Toshiki Oyu's Mugen Honda and the Cerumo Toyota of Hiroaki Ishiura.

This was thanks to what turned out to be an inspired decision to come in for a second stop on lap 48, which left Tsukakoshi leading Nakayama, Matsuda's Nissan (which had stopped on lap 41) and Hiramine.

When the race resumed on lap 55, Hiramine quickly passed Matsuda and then Nakayama, who subsequently dropped behind Matsuda the next lap, but the Impul driver undid his hard work by running wide at 130R.

That put Matsuda back into second place, and it briefly appeared he might be in a position to threaten Tsukakoshi for the win, but it soon became clear that Hiramine was the man with the real pace.

On lap 65, Hiramine tried to pass Matsuda on the right-hand side exiting Degner 2 and approaching the hairpin, but Matsuda moved over in a late bid to block the move, sending Hiramine on to the grass and almost into the barriers.

Matsuda's subsequent penalty left Hiramine in second and with a 4.5s deficit to Tsukakoshi, but as the Honda driver faded dramatically, Hiramine closed in and made the winning pass to deliver his second career GT500 win and first together with new Nissan recruit Baguette. 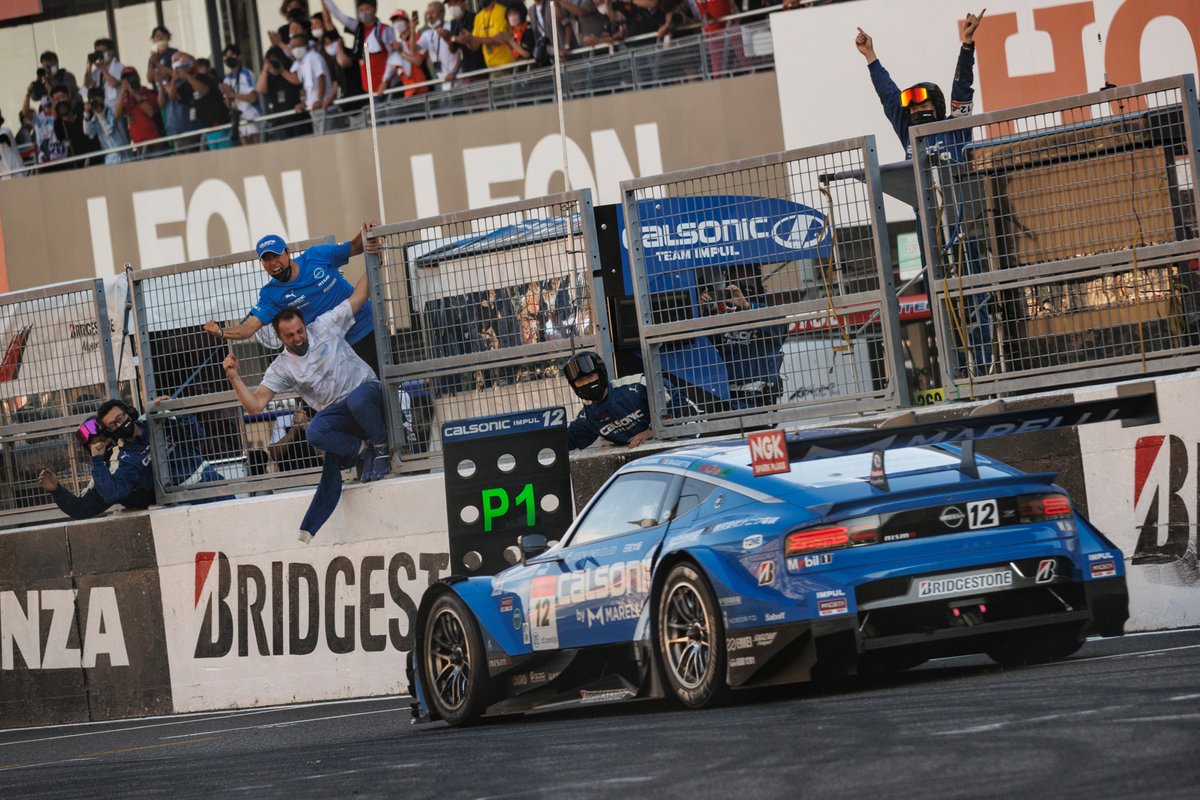 The pair jump to the top of the championship standings with three races to go, 10.5 points clear of three crews on equal points: TOM'S duo Fenestraz and Ritomo Miyata, NDDP Nissan pair Katsumasa Chiyo and Mitsunori Takaboshi and Tsukakoshi and Matsushita in the Real Honda.

In fourth place, May Suzuka winners Chiyo and Takaboshi were by far the best finishers of those running the stage one fuel flow restrictor, benefitting from Matsuda's penalty and Yamamoto's crash in the closing stages.

Mugen Honda pair Oyu and Ukyo Sasahara were sixth and best of the quartet of cars to have made their second stops after the safety car period, Oyu having passed the Nissan of Quintarelli for the lead on lap 31 and holding the advantage all the way until his final stop on lap 59.

The Racing Project Bandoh and #37 TOM'S Toyotas likewise had their strategies ruined by the safety car period, finishing seventh and eighth, while the Cerumo GR Supra that had been in the fight for the victory up to that point pitted with several laps to go to retire. 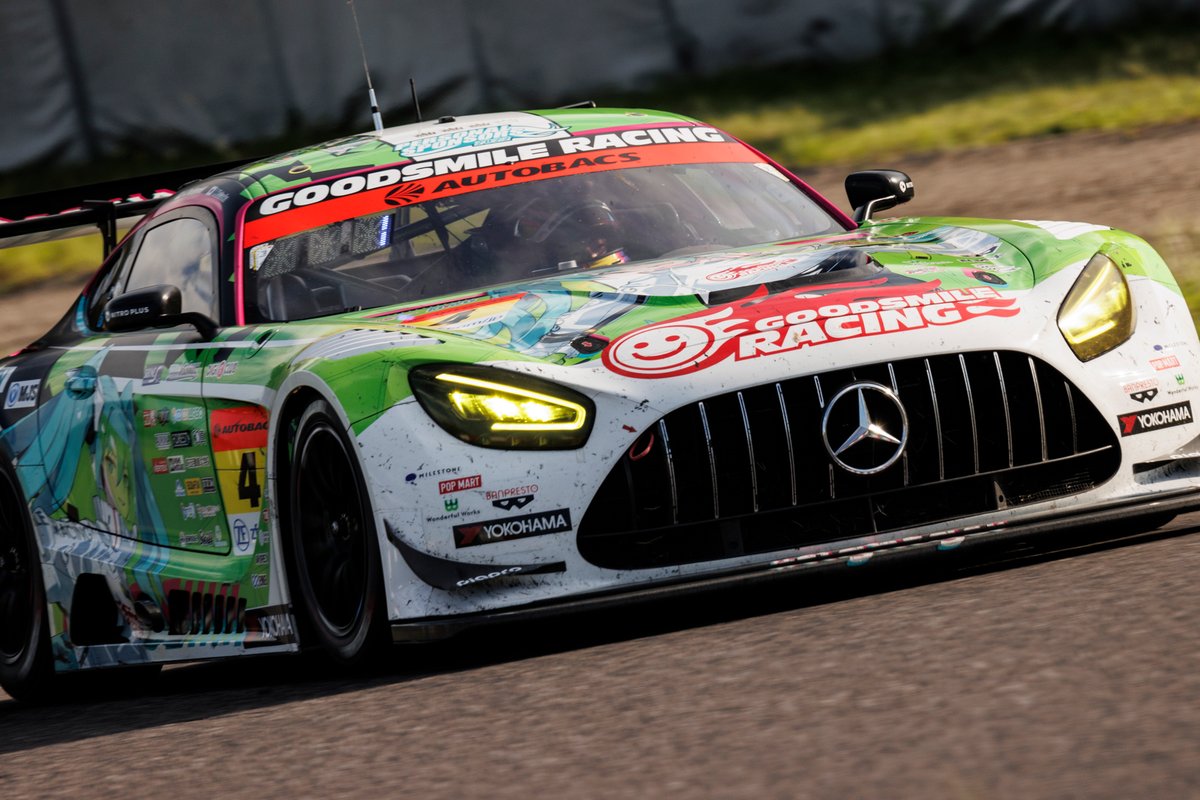 Kataoka ran fifth in the early stages, but after stopping on lap 16 - several laps prior to the early leaders - and taking on fresh Yokohama tyres, he was able to take control of the race in the second stint before handing over to Taniguchi for the run to the flag on lap 42.

Taniguchi came home 3.4s clear of the pole-winning #10 Gainer Nissan GT-R NISMO GT3 of Riki Okusa and Ryuichiro Tomita, who lost ground in the opening pitstop phase but managed to fight their way back to the runner-up spot.

With their nearest title rivals struggling, championship leaders Kiyoto Fujinami and Joao Paulo de Oliveira were looking good to extend their points lead in the Kondo Racing Nissan despite carrying the maximum 100kg of success ballast, and were in the mix for a podium finish for most of the distance.

That was until de Oliveira picked up a contentious drive-through penalty for making contact with the JLOC Lamborghini Huracan of Takashi Kogure while battling for fourth place, which dropped the Brazilian driver out of the points.

Running as low as 18th at one stage after a lurid off at 130R, de Oliveira charged back to score a single point in 10th, with he and Fujinami now leading Gainer pair Okusa and Tomita by eight points.

Claiming the final spot on the podium was the #30 apr Toyota GR86 of Manabu Orido, Hibiki Taira and Yuta Kamimura (replacing an unwell Hiroaki Nagai in the line-up), marking the new-for-2022 GT300 model's first podium.

Their path to third-place was eased by the ARTA Honda NSX GT3 Evo2 once again dropping out with mechanical issues, as well as a puncture for the JLOC Lamborghini following the earlier contact with de Oliveira.

Saddled with 89kg of success ballast, the works Subaru BRZ that had been second in the points prior to Suzuka laboured to a dismal 18th-place finish.

UPDATE: De Oliveira was later penalised for a full-course yellow infringement, dropping he and Fujinami to 13th. It means the Kondo Nissan pair lead the standings from Okusa and Tomita by seven points.