Just over three weeks on from Takaboshi's horrifying crash at Fuji Speedway, which required Nissan to rebuild the car around a spare chassis, Chiyo aced the start of Sunday’s 300km race to lay the foundations for both his and Takaboshi’s first victory in the GT500 ranks.

Lining up third in the #3 Michelin-shod Nissan Z, Chiyo eased past the #37 TOM’S Toyota GR Supra of Sacha Fenestraz into Turn 1 and then made a brave pass on Yuji Kunimoto’s Racing Project Bandoh Toyota at the high-speed 130R to end the opening lap in the lead.

An early Full Course Yellow for Bertrand Baguette’s stranded Impul Nissan and a full-blown Safety Car on lap 11 of 52 following a crash for the UpGarage Honda GT300 car complicated matters, but Chiyo’s position was never threatened.

TOM’S tried to undercut the Nissan by bringing in Fenestraz to the pits on lap 19 of 52 to hand over to teammate Ritomo Miyata, but such was Chiyo’s lead that he could make his stop two laps later and still allow teammate Takaboshi to emerge from the pitlane comfortably in front.

A late safety car on lap 40 following an incident for the #244 Max Racing Toyota GT300 car wiped out the healthy lead Takaboshi had built since taking over from Chiyo, but the 29-year-old made a perfect restart after the caution ended with nine laps to go en route to a comfortable win.

It marked the first victory for the new Nissan Z GT500 contender in only its third start in the category, as well as the fourth successive win for the Yokohama-based manufacturer at Suzuka. 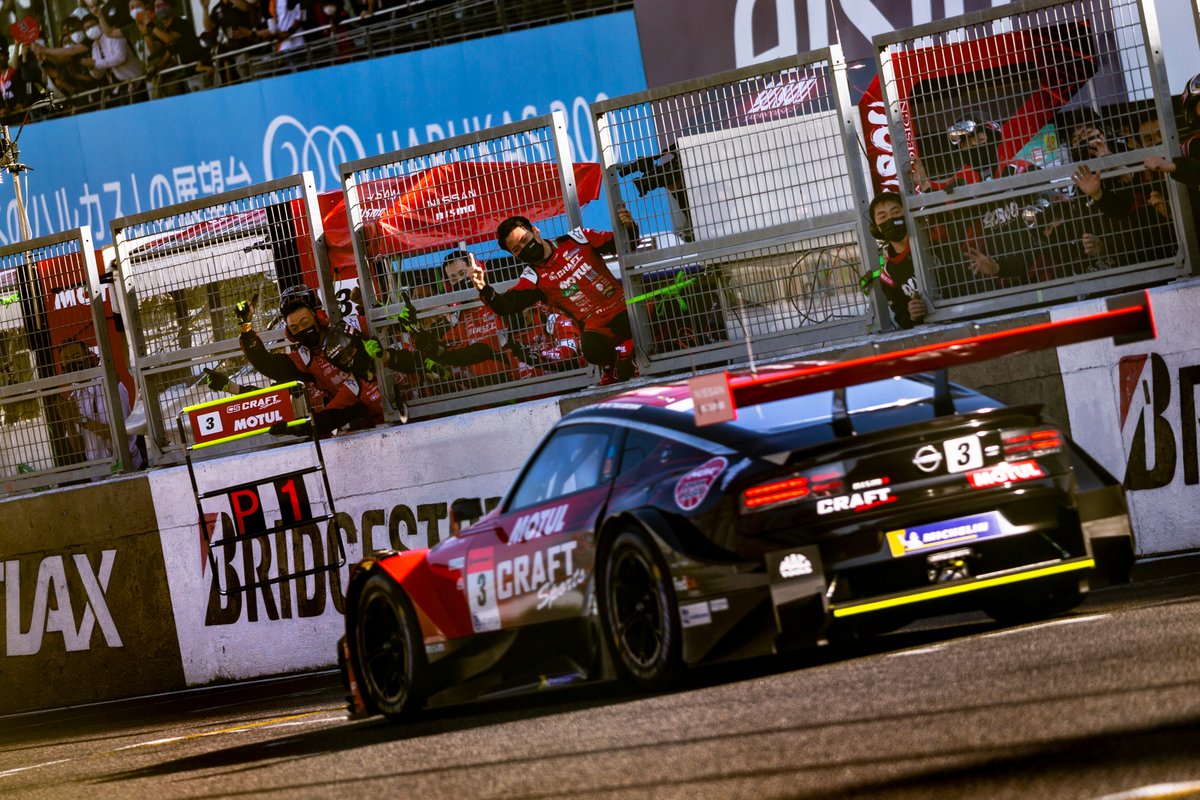 Second place went to the Real Racing Honda NSX-GT of Nobuharu Matsushita and Koudai Tsukakoshi, which got a jump on the #37 TOM’S Toyota crew of Fenestraz and Miyata by pitting a lap later.

Matsushita had earlier moved up from fifth to third in the first stint, passing the Mugen Honda of Ukyo Sasahara and the struggling Yokohama-shod Bandoh Toyota GR Supra of Kunimoto.

The SARD Toyota was the last GT500 car to complete its mandatory stop, and having timed it just before a FCY, Yuhi Sekiguchi and Yuichi Nakayama finished fourth, initially emerging from its pitstop in second but then falling back behind Tsukakoshi and Miyata on cold tyres.

Kunimoto and Sena Sakaguchi secured a season-best result of fifth in the Bandoh Toyota ahead of Kohei Hirate and Daiki Sasaki in the likewise Yokohama-shod Kondo Nissan, as Hirate made a last-lap pass on the ARTA Honda of Tomoki Nojiri and Nirei Fukuzumi for sixth.

Rookie Racing Toyota duo Kazuya Oshima and Kenta Yamashita bagged three points in eighth despite their success ballast, maintaining a joint lead in the championship with Chiyo and Takaboshi.

The top 10 was completed by the Kunimitsu Honda of Naoki Yamamoto and Tadasuke Makino and #36 TOM’S crew of Giuliano Alesi and Sho Tsuboi - the latter recovering from a drive-through penalty that Alesi earned for overtaking under yellow flags to claim the final championship point.

NISMO's flagship #23 Nissan finished out of the points in 12th after Tsugio Matsuda picked up a drive-through penalty for contact with one of the JLOC Lamborghini GT300 cars. 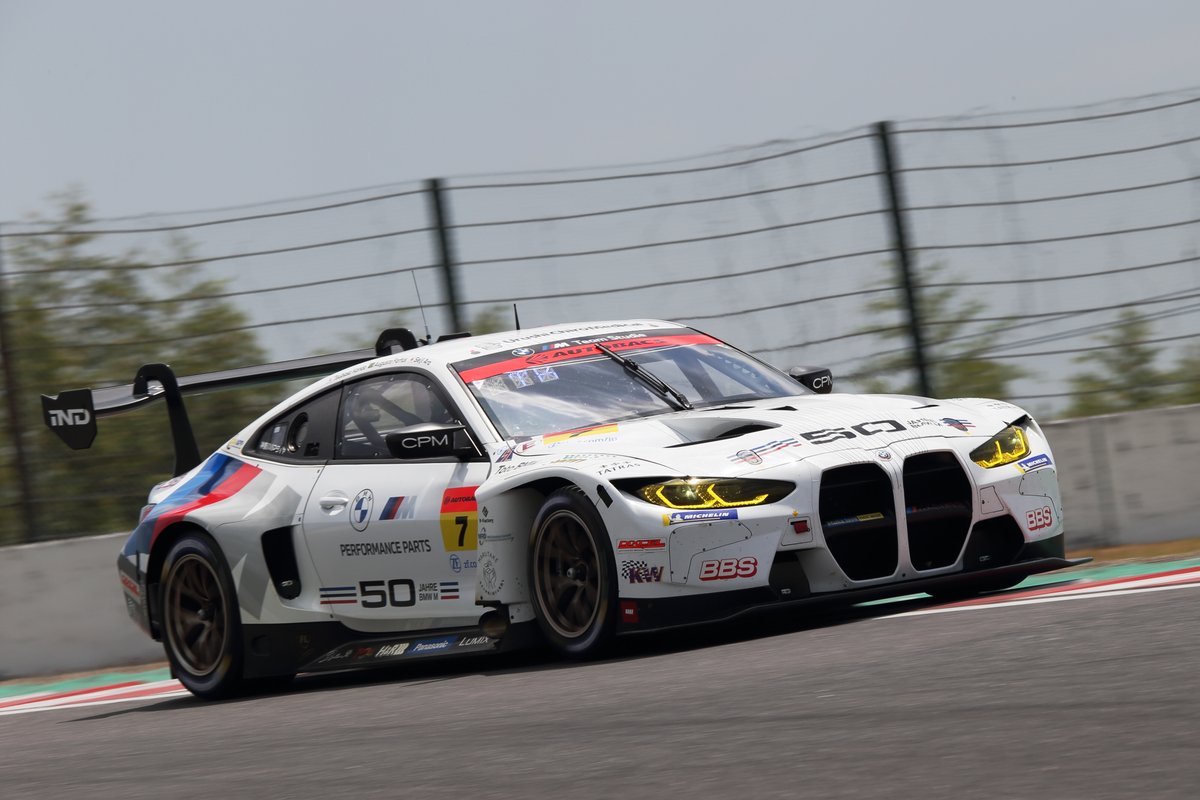 Ara took advantage of a fierce battle for second between the #96 K-Tunes Lexus RC F GT3 of Morio Nitta and the #56 Kondo Nissan GT-R NISMO GT3 of Kiyoto Fujinami to remain at front in the first stint, even though he was not able to pull away from the chasing pack.

Following the pitstops, Ara’s teammate Kondo came under pressure from Reiji Hiraki in the #5 Team Mach Toyota 86 Mother Chassis car, which had leapt to second with an early pitstop on lap 16.

But Kondo, replacing Augusto Farfus (absent to race in the Nurburgring 24 Hours) in Studie’s line-up at Suzuka, was able to defend from Hiraki on cold tyres to hold on to the lead, just as Hiroki Yoshida made it a three-way battle for victory in the #52 Saitama Toyopet Toyota GR Supra.

Kondo wasn't threatened after the final restart however, racing to a nine-second victory in the #7 BMW he shares with Ara.

Yoshida had passed Hiraki for second earlier in his stint but went off the final chicane before the restart, dropping to fourth and gifting second to Mach pair Hiraki and Yusuke Tomibayashi.

Fujinami’s teammate Joao Paulo de Oliveira put pressure on Hiraki late on but had to settle for a third-place finish that came despite carrying 66kg of success ballast, boosting the Kondo squad's chances of a second GT300 title in three years as they extended their lead at the top of the standings.

Yoshida initially dropped to fifth after his mistake in the Saitama Toyopet car he shares with Kohta Kawaai, but managed to make one place back at the expense of the #88 JLOC Lamborghini Huracan GT3 of Yuya Motojima and Takashi Kogure - which recovered from an earlier puncture for fifth.

Subaru’s lack of straightline speed hurt its prospects after a turbo problem in qualifying left it in the midfield, with Takuto Iguchi and Hideki Yamauchi only able to recover to 12th in their works BRZ.