Takuya Izawa wins for Honda in second race at Fuji 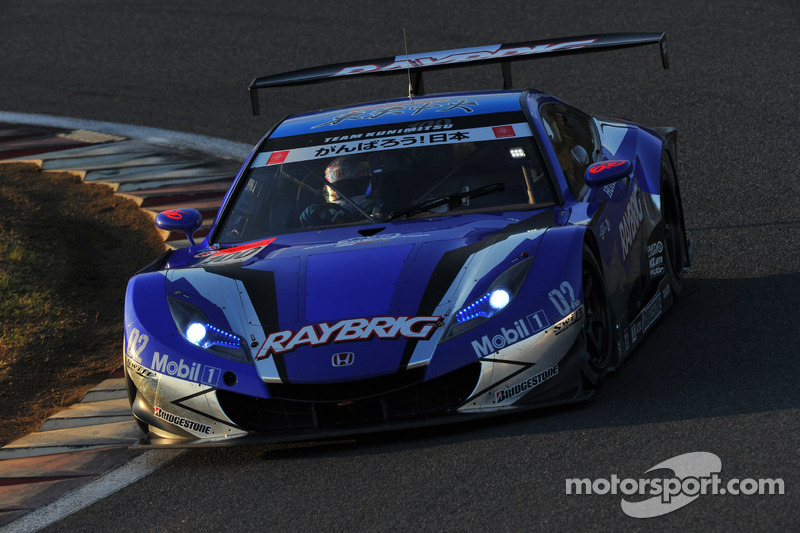 The regular season SUPER GT series races are competed by a relay of two drivers for each machine, but in this Sprint Cup event they compete separately in one race each, held this time on the 12th and 13th. The final winners of the JAF Grand Prix are determined by the point totals of each team’s two drivers in these two races.

Race 2 of the GT500 class (22 laps / 100.386 km) started at 15:25. Starting from 4th position on the grid, Takuya Izawa in the RAYBRIG HSV-010 got the best start. Izawa managed to pass the pole-starting Masataka Yanagida (S Road MOLA GT-R) half way through the first lap and take the lead.

From there it became a match race with Yanagida chasing the leader, Izawa. Later, when it looked as if there would a strong charge by the 2011 SUPER GT champion S Road, but Izawa, a new recruit for the winless RAYBRIG team this season, wouldn’t let that happen. He gradually edged away from Yanagida to build up a lead of just under three seconds. 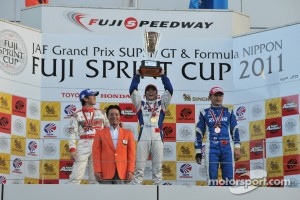 He ran on that way to the finish of the 100 km race to claim the win in Race 2 for the RAYBRIG team. Yanagida in the S Road machine finished 2nd. The battle for third was decided when the SC430 machines vying for that spot collided with each other and both sun out, allowing Toshihiro Kaneishi in the KEIHIN HSV-010 to move into 3rd.

From the results of this Race 2 and Race 1 held the day before, the GT500 class JAF Grand Prix went to the S Road MOLA GT-R（Masataka Yanagida / Ronnie Quintarelli） . As the overall winners of the GT500 class, the MOLA team was also awarded the Minister of Land, Infrastructure and Transport Prize.

In Race 2 of the GT300 class (22 laps / 100.386 km) the HATSUNEMIKU GOODSMILE BMW driven by Taku Bamba made a brilliant charge from 12th position on the starting grid to take the lead with the race sill in its early stages. Later, Bamba held off the challenge by Masami Kageyama in the HANKOOK PORSCHE to take the victory.

This was the second win in the two days of races for the HATSUNEMIKU GOODSMILE BMW GT300 team (Nobuteru Taniguchi/Taku Bamba) and it secured them the GT300 class JAF Grand Prix title.

No. 100 RAYBRIG HSV-010 [GT500]
Takuya Izawa: “All I can say is that I am just simply happy. Since I came to this team things have been good some times and bad at other times. But overall, I haven’t been able to deliver vary good results this season. So, I glad I was able to deliver with a good race today. I haven’t seen [our team manager] Kunimitsu [Takahashi] san yet since the race ended, so I want to really rejoice when I see him. The biggest point in today’s race was that I was able to make a good start. After that, the car’s balance, the condition of the tires, everything was great and I was able to push hard all the way from the first lap to the last. That was the key to everything, I believe. I can’t say that this last race made everything OK for the season, but since I was finally able to turn all the efforts that Yamamoto san and I have made together into a win, I actually feel a bit sad that we are now entering the off-season. Still, I think t was a race that will connect positively to next season.” 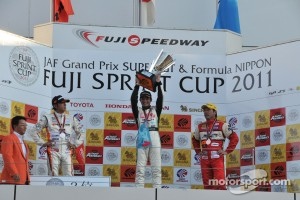 No. 4 HATSUNEMIKU GOODSMILE BMW [GT300]
Taku Bamba: “I am really tremendously happy. I believe that we have been able to win because of all the private sponsors that have supported us, and I am just very happy that we were able to win the JAF Grand Prix. In yesterday’ s qualifying I chose the dry-condition tires, but the choice was not a good one. So I was determined to make up for that mistake by fighting back to win the race. The competition was really fierce in the early stages of the race, so I focused on staying calm and setting one objective at a time. And I think was successful in driving according to the image I set. It has been a very rewarding year for me and I am grateful for that. All in all I think it was a very good year.”