Murata, Japan, July 29th, 2012 – Cyndie Allemann was pursuing her learning year in Super GT at Sportsland SUGO, with the presentation of the fourth round of the 2012 season of this highly competitive championship. A balance of performance not favoring the Zent Audi R8 LMS was once again an issue, even though Cyndie came to like this short track that was remembering her of her favorite kart tracks. 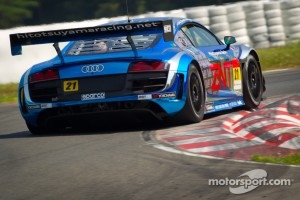 “Once again, I was discovering a new circuit this weekend in Sugo. I had a taste of it on the racing sim last week, and it seemed to me that it was a fairly short track with 3.7 km, with a lot of second and third gear corners. We only had one practice session on Saturday morning when I shared the car with my teammate. During this practice session, I drove about 45 minutes, which was enough for me to learn the track. I really liked the circuit. However, we didn’t have enough grip so we had to make the necessary adjustments on the car. But personally, I felt good with my own driving.”

The qualifying session turned out to be difficult for the Zent Audi #21, but still full of information and learning experience for the car setup.

“For qualifying, we ran out of time to properly work on the car, and as a consequence, we qualified only 20th. My teammate qualified the car, since he knew the track better than me, so it was strategically better this way. After qualifying, we realized that our car was not quite at the top, and that we still had a lot of oversteer and that we still had to work on the setup.”

Things got much better on Sunday morning for Cyndie who established the benchmark fast laps of her team. 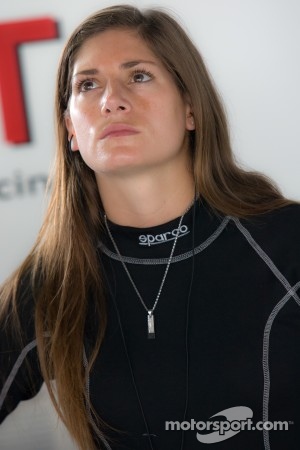 “During the Sunday morning warmup, we focused on the setup to make sure the car was competitive for the race. We really made major changes on the car and that turned out to be positive because our fastest time was fairly OK compared with our competitors and that gave us high hopes for the race.”

The race was looking good for Cyndie and her teammate Akihiro Tsuzuki, but a mechanical problem put a stop to the team progression.

My teammate Aki took the start and had a very nice progression up to the 13th place and we also had good lap times, so it was looking good for us for a top-10. Unfortunately, 45 minutes into the race, the alternator stopped charging and in consequence, the gears were not working properly and then, the car stopped altogether on the track and we had to retire. Therefore, I didn’t even have the chance to drive during the race. Of course, it is very disappointing considering the fact that I got well adapted to the track with combination of slow and fast curves. I was really looking forward to race on this track, especially since I made some very fast laps during the warmup. But hey, this is auto racing and mechanical failures are part of the sport and must be expected. I am really impatient to get to the next race…” 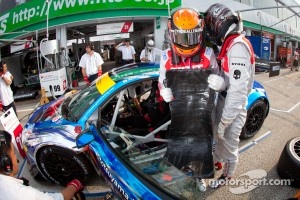 “Otherwise, and as usual, the ambience was awesome with all these fans in the paddock and in the grandstands. The sheer number of spectators who follow the Super GT series is unbelievable. And I can understand it with the show we put on during the Sunday afternoon race, whether in GT300 or in GT500. It really was a great spectacle that was worth seeing. This is why these races are shown live on the Japanese TV. I wish the Super GT races would also be shown in Europe and in America – all the fans over there would have a blast watching those races.

Cyndie Allemann: a World class driver, top athlete and brand ambassador. Always a fan favorite, whether in Europe, in the USA and now in Japan, 26 years old Cyndie Allemann was literally born for speed.

Her 19-year racing career has seen her compete at the highest levels in many different series and tracks around the World: karting (winning the European junior title when she was only thirteen), open-wheel (EuroF3, Indy Lights, etc.), GT (FIA-GT1 World Championship) and endurance racing (GT1 podium at Spa in the Le Mans Series, 24 Hours of Le Mans, etc.). In 2012, she races in the Japan Super GT Series with the Hitotsuyama Racing team on the Audi R8 LMS.

For more info on Cyndie or to follow her, visit her web site and her facebook fan page at:

Founded in 1990 by Mikio Hitotsuyama, Hitotsuyama Racing team has an experience of more than twenty years in auto racing. The team has competed in many top level championships such as the Super GT (formerly known as the JGTC), the Le Mans Series, the Japan Le Mans Challenge (in LMP1, GT1 and GT2 classes), the Porsche Carrera Cup Japan and the Japan Touring Championship. The team has raced many top drivers and set itself apart by its bold vision regarding its racing programs, as well as its ultra-professional approach. Her 2012 racing program includes a full participation in the Super GT championship with two Audi R8 LMS in the GT300 class.

For more info on Hitotsuyama Racing, visit the team web site at:

Ito and Oshima dominate Sugo GT 300km for the victory