The Impul Nissan team clinched its first SUPER GT race victory in five years at Sugo after a drive-through penalty dropped the polesitting ARTA Honda out of contention.

ARTA appeared on course for its first victory of the season following an impressive first stint from Tomoki Nojiri, with Nirei Fukuzumi carrying on the good work of his teammate after taking over the wheel of the #8 NSX-GT.

But on lap 45 of 83, race control handed the Honda outfit a drive-through penalty for a pitstop infringement, dropping it firmly to the rear of the pack.

Kazuki Hiramine was best-placed to take advantage of the situation in the Impul GT-R he shares with Nobuharu Matsushita, securing a second consecutive win for Nissan this season following the NISMO team’s triumph last time out at Suzuka.

When the fifth round of the season got underway following an extra formation lap, Nojiri led the field cleanly from pole position in the ARTA from the Mugen Honda driven by Toshiki Oyu.

Nojiri wasn’t able to shake off Oyu in the opening lap of the race and even had to take a wide line going into Turn 1 on lap 4 to hold onto the lead.

But having resisted the early charge from Oyu, Nojiri was able to pull a small gap out front and was never threatened again for the remainder of the stint.

Oyu, meanwhile, fell into the clutches of Matsushita's Impul Nissan and Bertrand Baguette in the Real Honda, kicking off a battle that would eventually determine the winner of the race.

Baguette appeared to be the quickest of the trio but it took him lap 14 to make a move on Matsushita for third before he could go about chasing Oyu for second.

But as Baguette tried to make a move around the outside of Oyu into Turn 1, Matsushita returned to contention, retaking third position from the Belgian into Turn 2.

Third position became second when Oyu began to struggle on his Dunlop tyres towards the end of the stint, with Matsushita easing past him at Hi-Point on lap 21 - and Baguette following him on the same tour.

At this point, Nojiri had pulled a lead of over 10 seconds as his rivals squabbled for second, and he handed over the car to Fukuzumi with a comfortable advantage up front.

But the race turned to its head on lap 45 when the ARTA team was handed a drive-through penalty for not following the correct pitstop procedure, wrecking its hopes of victory for the second time this season.

A long safety car period, triggered by Ritomo Miyata’s Bandoh Toyota GR Supra catching fire, dealt even more damage, dropping it to the back of the grid.

When the race resumed on lap 55, Hiramine led the field in the Impul Nissan after taking over from Matsushita, with Koudai Tsukakoshi holding second in the Real Racing Honda previously driven by Baguette.

Traffic from the GT300 field could have spelt trouble for Impul, but Hiramine hung on to first position to end a win drought for the celebrated Nissan squad stretching back to Fuji in 2016. 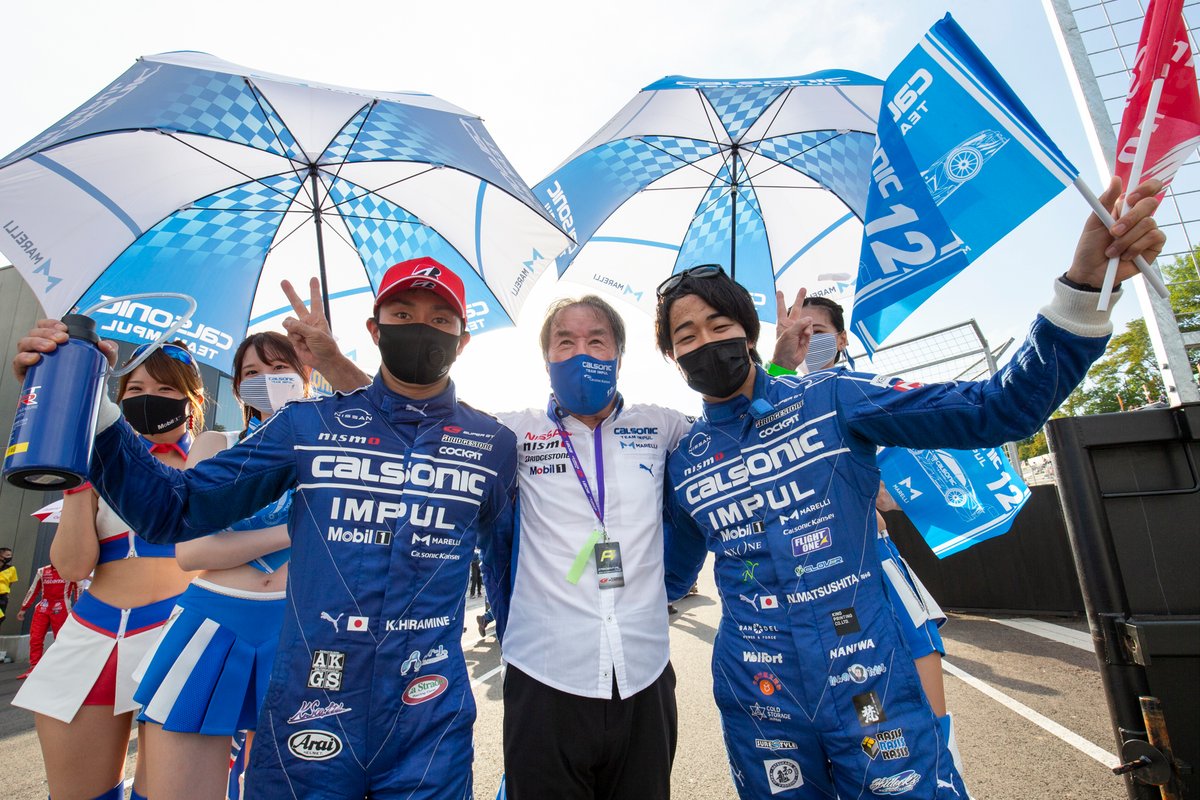 The championship-leading Kunimitsu Honda team finished a surprise second despite running a stage two fuel restrictor after an early stop on lap 27 propelled the car from the outside the top 10 to podium contention.

Tadasuke Makino was able to make little progress in the first stint and slipped back to 13th towards the end of his stint, before handing over the reins of the car to Naoki Yamamoto.

Yamamoto rejoined the track in fifth and passed the #37 TOM’S Toyota of Ryo Hirakawa with relative ease, and then moved up to podium positions when the B-Max/NDDP Nissan was forced to retire with a technical problem.

Yamamoto later caught Tsukakoshi napping at the FCY restart - caused by Rookie Racing Toyota grinding to a halt at Turn 1 - pulling off the move to secure second and strengthen the chances of defending his title.

Fourth place went to the #36 TOM’S Toyota shared by Sho Tsuboi and Yuhi Sekiguchi after the former passed the SARD Toyota of Heikki Kovalainen and Yuichi Nakayama late in the race.

That was just after Nakayama removed the #37 TOM'S Toyota of Hirakawa and Sena Sakaguchi with a risky lunge at Turn 1 that left Hirakawa with what proved to be terminal damage.

Mitsunori Takaboshi and Daiki Sasaki finished sixth in their Kondo Nissan, while NISMO duo Ronnie Quintarelli and Tsugio Matsuda were classified seventh after having to serve a five-second stop/go penalty for an unauthorised engine change after qualifying.

Takuya Izawa and Hiroki Otsu finished eighth in the Nakajima Honda, while the likewise Dunlop-shod Mugen Honda of Oyu and Ukyo Sasahara eventually ended up down in ninth.

The ARTA squad had to make several trips to the pits, ostensibly due to serving its initial drive-through penalty during the safety car period, and finished a lap down in 10th.

Takuto Iguchi and Hideki Yamaguchi secured a first GT300 win for the new Subaru BRZ contender with a commanding display from start to finish. 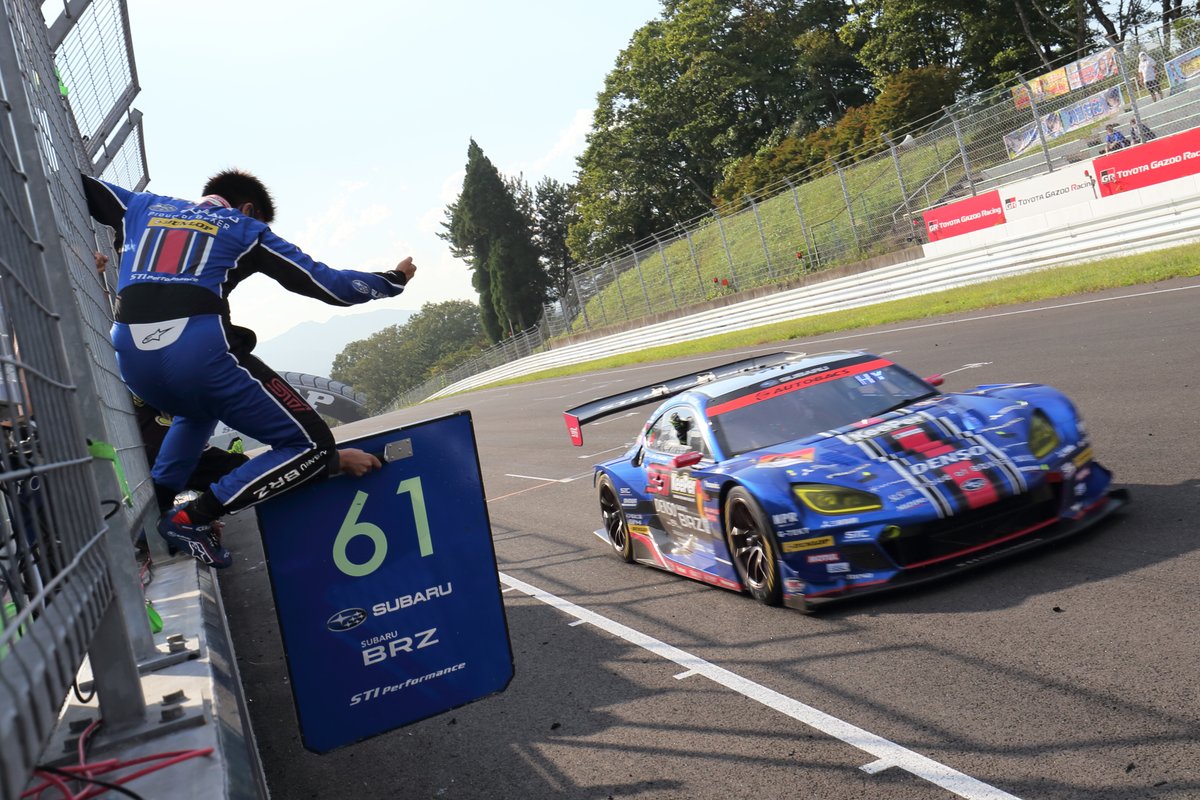 While the duo were unable to convert their previous two pole positions this season into race victories, they faced no issues this time as they led every single lap apart from the pitstop sequence.

This marked a first win for the R&D Sport-run team since the Sugo round of the championship in 2018.

ARTA redeemed itself for its GT500 shambles with a second-place finish in the GT300 class thanks to a charging opening stint from veteran racer Shinichi Takagi.

Starting fifth on the grid, Takagi charged his way through the pack in the #55 Honda NSX GT3, passing the similar #18 Honda driven by UpGarage’s Takashi Kobayashi on lap 22 to move up to second.

Ren Sato held on to the spot after taking over from Takagi to finish ahead of reigning champions Joao Paulo de Oliveira and Kiyoto Fujinami in the #56 Kondo Racing Nissan GT-R NISMO GT3, who defied their 81kg success handicap for a spot on the podium.

Completing the top five were the #87 JLOC Lamborghini Huracan of Kosuke Matsuura and Natsu Sakaguchi and the LM Corsa Toyota GR Supra GT300 of Shunsuke Kohno and Hiroki Yoshimoto, while Drago Corse Honda pair Ryo Michigami and Shogo Mitsuyama took their first points of the year in sixth.

UpGarage Honda pair Kobayashi and Teppei Natori were consigned to 12th by a slow pitstop.

With pre-race standings leaders Atsushi Miyake and Yuui Tsutsumi finishing only ninth in the #244 Max Racing Toyota while carrying 100kg of ballast, Subaru pair Iguchi and Yamauchi now lead the standings by a single point from Kondo drivers de Oliveira and Fujinami.