Honda locked out the front row of the grid for Sunday’s SUPER GT race at Sugo, with Nirei Fukuzumi claiming pole position in the ARTA NSX-GT.

The former Formula 2 racer was the only driver to break the 1m10s barrier in qualifying, coming close to the outright lap record with a time of 1m09.887s in his Bridgestone-shod Honda in the Q2 pole shootout.

Although the 24-year-old set the lap with almost two minutes left on the clock, none of his rivals came were able to usurp his time as he ended a pole drought for the ARTA squad stretching back to last year’s second Suzuka race.

Toshiki Oyu ended up as the closest rival to Fukuzumi in the Mugen Honda running on Dunlop tyres, 0.167s off the pace.

Nobuharu Matsushita secured the best qualifying result of the season the Impul Nissan squad in third, another two tenths adrift of the lead pair after improving to a 1m10.238s later in the session.

Bertrand Baguette was the leading car running a fuel flow restrictor in fourth in the Real Racing Honda (Bridgestone), while Sugo specialist Kohei Hirate rounded out the top five in the NDDP/B-Max Nissan (Michelin).

Takuya Izawa made it four cars from Honda’s stable inside the top six with a time of 1m10.366s in the Dunlop-shod Nakajima NSX-GT.

After suffering its worst qualifying result since 2008 last time out at Suzuka, Toyota once again struggled, with the Cerumo team the best of the GR Supra outfits in seventh with Yuji Tachikawa at the wheel.

Although Yuichi Nakayama topped Q1 with an impressive 1m10.275s effort in the SARD Toyota, his teammate Heikki Kovalainen was unable to replicate that effort and ended up at the bottom of the timesheets in Q2.

Five of the top eight crews in the standings were eliminated in Q1, with 2017 champion Ryo Hirakawa the fastest driver to miss the cut in the #37 TOM’S Toyota.

Hirakawa and Sena Sakaguchi will line up ninth on the grid for Sunday’s race, joining championship leader Naoki Yamamoto and his teammate Tadasuke Makino in the #1 Kunimitsu Honda - one of two cars running the stage two restrictor - on the fifth row.

The Rookie Racing Toyota of Kenta Yamashita and Kazuya Oshima, also running the stage two restrictor, failed to progress to Q2 for the third consecutive round, only managing 11th.

Suzuka winners Ronnie Quintarelli and Tsugio Matsuda could do no better than 12th in the NISMO-entered Nissan despite not being hobbled by fuel restrictors.

Yuhi Sekiguchi and Sho Tsuboi qualified a distant 14th in the #36 TOM’S Toyota behind Yuji Kunimoto and Ritomo Miyata in the Yokohama-shod Bandoh Toyota.

Subaru on pole again in GT300

In the GT300 class, the works Subaru team claimed its third pole position of the season at Sugo, beating the UpGarage Honda squad by over three tenths of a second. 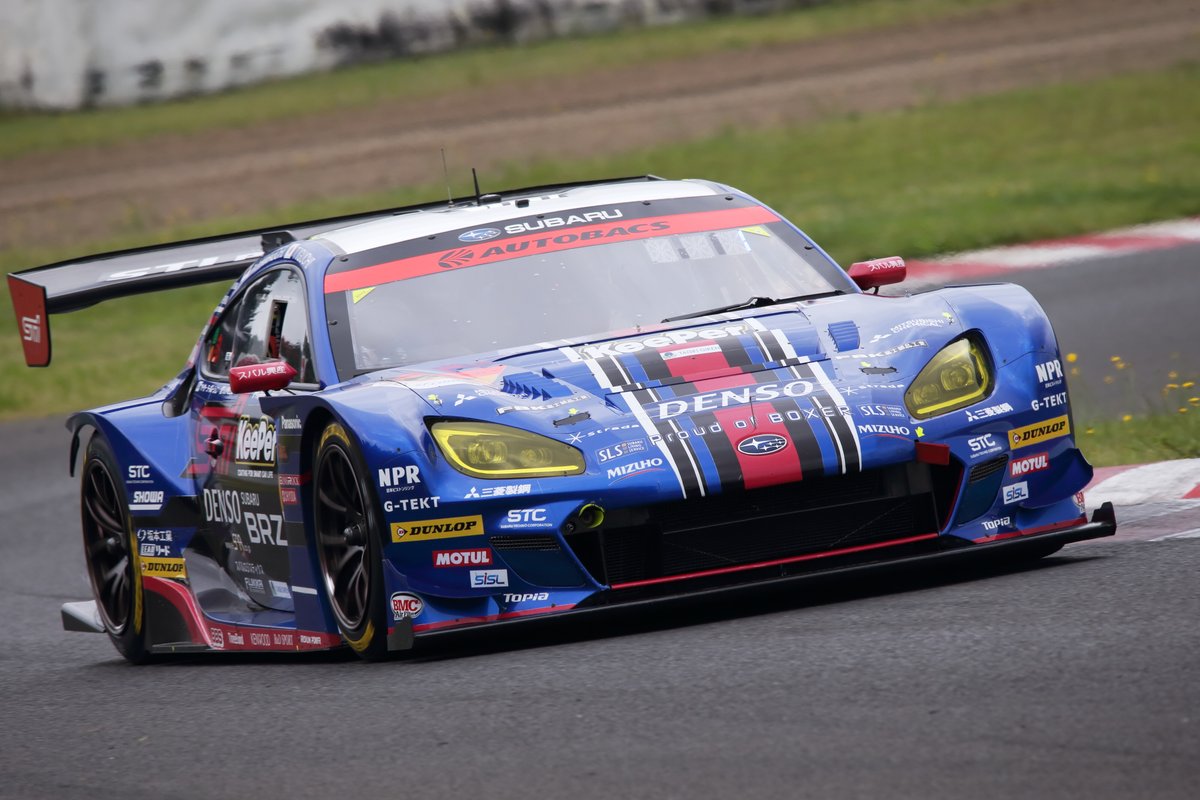 After Takuto Iguchi set the second-fastest lap in his Q1 segment to take the #61 R&D Sport BRZ into Q2, Hideki Yamauchi clocked a time of 1m17.479s to secure a third pole in four races.

While the Dunlop-shod Subaru was out of reach, Honda driver Teppei Natori ensured Yokohama was represented on the front row after posting a time of 1m18.832s in the #18 UpGarage Honda NSX GT3.

The LM Corsa squad ended up third on the grid thanks to a time of 1m17.971s in the #60 Toyota GR Supra GT300, while former GT500 star Takashi Kogure made it four different manufacturers in the top with a 1m18.044s in the #88 JLOC Lamborghini Huracan GT3.

The championship-leading #244 Max Racing Toyota qualified ninth in the hands of Atsushi Miyake, ahead of title rival Kiyoto Fujinami in the #56 Kondo Nissan GT-R NISMO GT3.

Naoya Gamou and Togo Suganami, third in the championship coming to Sugo, were eliminated in Q1 and will start 18th in the #65 LEON Racing Mercedes AMG-GT3, two places ahead of #11 Gainer pair Katsuyuki Hiranaka and Hironobu Yasuda.