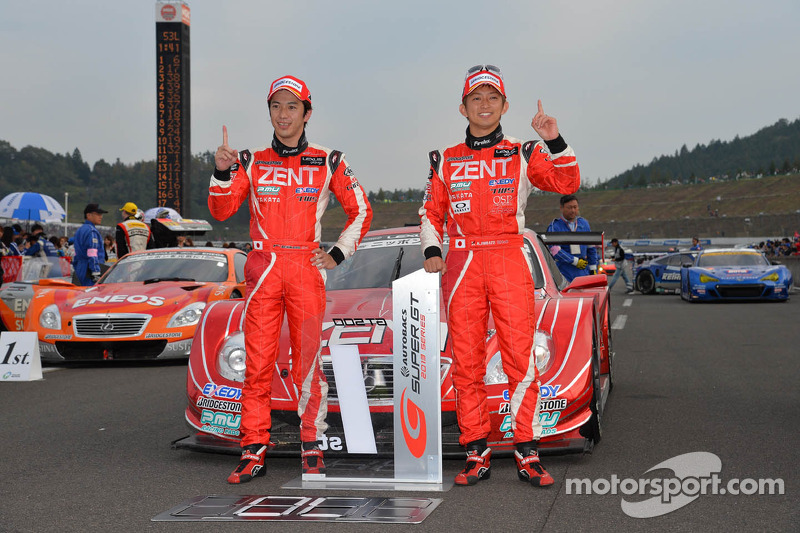 As for the season Drivers Championship title, it went to the 3rd-place finishing No.38 ZENT CERUMO SC430 drivers Yuji Tachikawa and Kohei Hirate.

In the GT300 class, the No.11 GAINER DIXCEL SLS driven by Katsuyuki Hiranaka and Bjorn Wirdheim were the winners. The GT300 class Drivers Championship title went to the No. 16 MUGEN CR-Z GT drivers Hideki Mutoh and Yuhki Nakayama. This was the first SUPER GT series title for a team racing a hybrid machine.

The race began with a good start by the pole-sitting No.6 ENEOS SUSTINA SC430 (Kazuya Oshima) that gave it the early lead. Behind it, a race developed between three of the season title contestants, the No. 17 KEIHIN HSV-010 (Toshihiro Kaneishi), the No. 38 ZENT CERUMO SC430 Kohei Hirate) and the No. 23 MOTUL AUTECH GT-R (Ronnie Quintarelli). 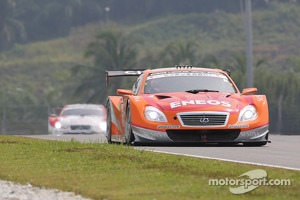 While that battle heated up the ENEOS SUSTINA SC430 in front began to open up a big lead, and by the time it had finished its routine pit stop at mid-race, it had a nearly 15-second margin of lead over No.38 ZENT CERUMO SC430 (Yuji Tachikawa) in second place. Over the second half of the race, the ENEOS SUSTINA SC430, now driven by Yuji Kunimoto, slowed somewhat but still maintained a dominant 11-second lead at the finish to take the win.

Finishing 2nd was the KEIHIN HSV-010, which had dropped back a bit in the early going but recovered in the second half of the race with Koudai Tsukakoshi driving. Although it was passed by the KEIHIN HSV-010 in the second half, the ZENT CERUMO SC430 (Yuji Tachikawa/Hirate) held on fiercely to finish 3rd and win the season’s Drivers and Team titles.

In the GT300 class, the pole-starting No. 61 SUBARU BRZ R&D SPORT (Tetsuya Yamano) lost ground in the early stages of the race, giving up the lead to the No.11 GAINER DIXCEL SLS (Bjorn Wirdheim), which was then able to run away from the pack and continue to hold the lead through the second half at the hands of Katsuyuki Hiranaka to claim victory. It was the team’s second win of the season.

The GT300 class Drivers Championship title for the season went to the No.16 MUGEN CR-Z GT drivers Hideki Mutoh and Yuhki Nakayama. The team title also went to MUGEN team. The CR-Z GT machine is based on the Honda hybrid car, and this is the first time that a hybrid car has won a SUPER GT series title. （Spectators: 30,000）


Kazuya Oshima: “I never thought [the race development] could go this well. I am really happy. In the morning’s free practice there was trouble with the tires picking up shredded rubber and that worried me some, but with the higher temperature during the race that problem was improved. The car was fast and the tires performed well, so just driving normally I was able to open up a gap over the competition. With this year’s new driving partner, I have been the one responsible for leading the team but we weren’t getting the results we hoped for. But, with having won this last race I can now look at everyone on the team and all the people who cheered for us with a smile at last. That makes me very happy.”

Yuji Kunimoto: “I came to the team as a new driver this year, but I just wasn’t able to drive like I thought I could in the early stages of the season and it made me think a lot. But, as the season progressed I began to drive like myself again and we were finally able to get a win in the end. [Kazuya] Oshima-san was able to open up a bigger gap over the field than we had expected and that made it easier for me to drive, but as the end neared with the good possibility of winning the race, I got excited and began to tighten up a bit. Knowing that the only way to pay back the team for all they have done for me is with good race results, I am very satisfied to be able to finally do that at the end of the season.”


Katsuyuki Hiranaka: “This time we were able to perform our full test menu prior to the race, so I had confidence in the performance of the tires. Actually I was confident of being able to win at the previous round at Autopolis, but it ended up being a race of mishaps (grimace). I was in a position of responsibility for leading the team this year and I ended up performing most of the tests myself. If I made the wrong decisions, it meant that the team would be led in the wrong direction. In the midst of that pressure and responsibility we were able to win the opening and final rounds of the season. I am disappointed that we didn’t win the championship, but I am very happy that we were able to end the season by winning the final round.”

Bjorn Wirdheim: “Beyond anything else, my goal was to win this race. We had no chance of winning the championship if we didn’t win this race. When you look at things in that perspective, this was virtually a perfect race weekend. The tire performance was wonderful, and the tire choice that my teammate Katsuyuki [Hiranaka] was the best choice. In that sense, we did everything we needed to do. Although we didn’t win the championship, it was due to misfortunes like the timing of the Safety Car coming out in the Suzuka race and other things. I have regrets but it was still a wonderful weekend.”


Yuji Tachikawa: “Despite being in good condition this season, in the middle stages of the series we struggled and fell out of the picture in the title race at one point. But no one on the team gave up hope and that spirit brought us through to the end. Bridgestone also came through with very good tire for us, after having the title taken from them two consecutive years. And, this being the final year for the SC430, TRD (Toyota’s racing department) and the other SC430 teams really wanted to win the title. Since I have been involved in the SC430 development from the beginning, I am really happy to have won the title with this machine. In the latter stages of the race, it was relieving to know that we could win the title, but conversely that led to my getting a bit stiff (grimace).”

Kohei Hirate: “For me, this is my first title in car racing, so I am really happy. So, happy that I can’t even shed tears of joy (laughs). Thinking that the early stages of the race today would be the key, I passed the two cars in front of me. [Waiting in the pit] in the latter stages of the race I was praying for a number of things and just wanted the race to end with us in that position. When I saw car No. 38 coming round the final turn of the final lap, I was just so happy. In the early part of this season things were so tough that I was worried about how it would turn out, so now that it is over and we have won the title it is such a joy, and I am now so grateful to everyone that supported us.”


Hideki Mutoh: “Because this car is a hybrid, I feel that I was driving with the dreams Team MUGEN, and Honda and all the fans together with me. So, I am extremely happy that the sum total of everything has brought us the wonder result of winning the season title. If this title by a hybrid machine sparks a new generation of motor sports it will certainly have been a great result.”

Yuhki Nakayama: “ I was so tense when I was driving that I really don’t remember a thing about it now (wry laugh). The only thing I know is that Mutoh-san got the car to me in a good position and I knew that I had to keep that position and win the title. That kept me pushing all the way to the end.”