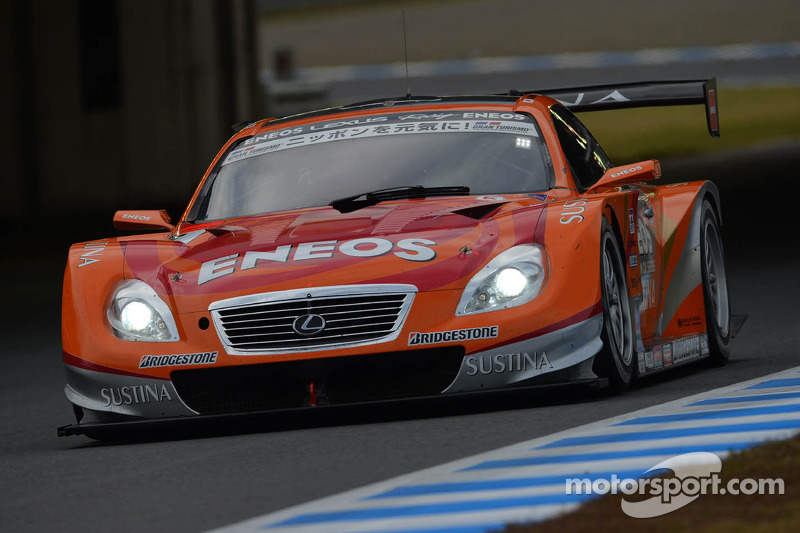 Race 2 of the JAF Grand Prix SUPER GT & Formula NIPPON FUJI SPRINT CUP 2013 took place on November 24, the final day of competition in this event bringing together Japan’s premier racing classes, SUPER GT and SUPER FORMULA, at Fuji Speedway (one lap 4.563 km) in Shizuoka Pref. Race 2 of the GT500 class was won by the No.6 ENEOS SUSTINA SC430 driven by Kazuya Oshima. The GT500 class JAF Grand Prix went to the No. 17 KEIHIN HSV-010 team (Koudai Tsukakoshi/Toshihiro Kaneishi) based on the combined points of races 1 and 2.

It was a second straight day of blue skies over Fuji Speedway. The GT500 class Race 2 (22 laps /100.386 km) started at 15:35. The No. 6 ENEOS SUSTINA SC430 (Kazuya Oshima) got a good start from pole position and was the leader through the first turn. The 2nd-place grid sitter and this season’s SUPER GT series champion, Kohei Hirate in the No. 38 ZENT CERUMO SC430 got a slow start and ended up in 5th position. Instead, it was the No. 36 PETRONAS TOM'S SC430 (Kazuki Nakajima) that moved into 2nd position to chase the ENEOS SUSTINA SC430 and stage a battle of wits with the leader within a margin of about one second.

In third position was the No. 12 CALSONIC IMPUL GT-R (Joao Paulo de Oliveira) but the distance to the two leading Lexus SC430 machines continued to widen. Behind No. 12 came the No.100 RAYBRIG HSV-010 (Takuya Izawa), the No.18 Weider Modulo HSV-010 (Frederic Makowiecki), the No. 38 ZENT CERUMO SC430 and the No. 17 KEIHIN HSV-010 (Toshihiro Kaneishi), all locked in intense battles for position).

In the latter half, the race for the lead became a deadlock that saw the No. 36 PETRONAS TOM'S SC430 gain ground in the turns only to have the No. 6 ENEOS SUSTINA SC430 pull away again on the straights. Time and again Nakajima in car No.36 made thrilling attempts to pull even on the turns, but Oshima in car No. 6 succeeded in blocking his advance every time. In the end, the No. 6 ENEOS SUSTINA SC430 managed to hold off the No. 36 PETRONAS TOM'S SC430, with its two regular season wins, and claim the victory.

The overall winner of the JAF Grand Prix for the first time was the No. 17 KEIHIN HSV-010 (Koudai Tsukakoshi/Toshihiro Kaneishi), having finished 1st in Race 1 and 7th in this race. Also, the Minister of Transport Cup went to the No. 17 KEIHIN REAL RACING team.

In the GT300 class Race 2 (22 laps /100.386 km), the pole-starting Kazuki Hoshino in the No.3 S Road NDDP GT-R made a flying start and was given a penalty that took him out of the competition for the lead. This left the No.55 ARTA CR-Z GT (Shinichi Takagi) in the lead, but it proved to be incapable of holding a fast enough pace and eventually surrendered the lead to the No.2 EVA RT TEST-01 APPLE MP4-12C driven by Hiroki Katoh.

In the second half of the race, the No.11 GAINER DIXCEL SLS (Katsuyuki Hiranaka), two-time winner of the JAF Grand Prix, was closing in on the No. 2 EVA RT TEST-01 APPLE MP4-12C, but No. 2 managed to make it to the checkered first and take the win. This was the first SUPER GT victory for the McLaren MP4-12C.  The GT300 class JAF Grand Prix winner was the winner of Race 1 and 2nd-place finished in this race, the No. 11 GAINER DIXCEL SLS (Katsuyuki Hiranaka/Bjorn Wirdheim). For the No. 11 GAINER team this was their second JAF Cup.


Kazuya Oshima (No. 6 ENEOS SUSTINA SC430 [GT500]): “All I can say is that I am simply very happy. I’m not usually one to show my emotions openly, but when I took the checkered at the finish line I was shouting into the wireless. I was happy when we won the last race of the regular season, but I think I was even happier this time because I was able to hold off a really intense charge by Kazuki [Nakajima] to the end. I think it must have been the same for all of the drivers today but I had a lot of trouble with pick-up of loose rubber bits on the track this time. I tried to get the picked up rubber bits off my tires without losing ground as I kept blocking Nakajima-san. It was hard on the nerves, but I got the win and am very happy with that.”

Hiroki Katoh (No. 2 EVA RT TEST-01 APPLE MP4-12C [GT300]): “After analyzing my partner Kazuho Takahashi’s race yesterday, we decide to go into today’s race with settings that would give better performance on the straights, but that proved to be hard on the tires. But the flow, you might say, was good and we had some luck that made it possible for me to win. It was a stressful season this year with things like no-point finishes that I had never experienced before, so it was really good to end the year with this victory. I want to say thanks to McLaren and Mooncraft [in charge of the maintenance work] and of course my partner [Kazuho] Takahashi-san.”

Tsukakoshi in the KEIHIN HSV-010 wins a close battle to beat the champion!