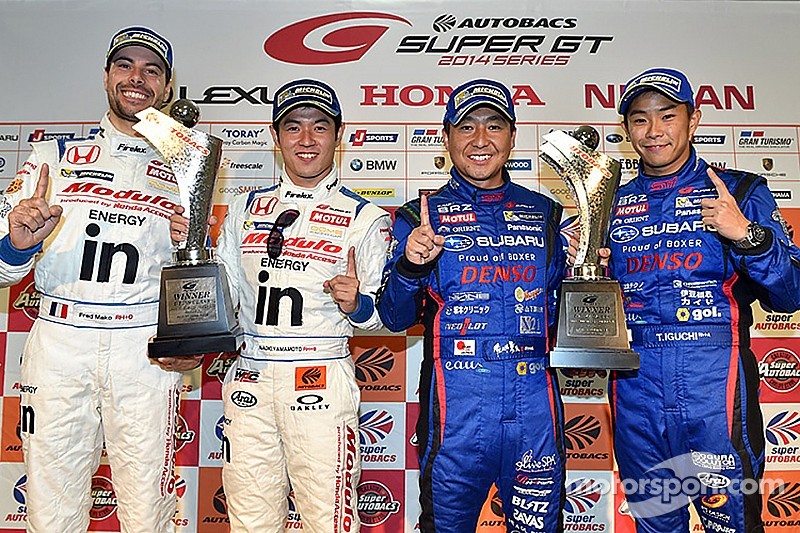 In a race thrashed by the effects of Typhoon #11 that brought out the Safety Car twice, the No. 18 Weider Modulo NSX CONCEPT-GT driven by Naoki Yamamoto and Frederic Makowiecki was the winner of the GT500 class race, bringing the Honda NSX CONCEPT-GT its first win of the season. In the GT300 class race the winner for the first time this season was the No. 61 SUBARU BRZ R&D SPORT that led all the way for a pole to checkers victory.

Fierce battling in the rain

After a pre-race warm-up that was extended to 20 minutes, the FUJI GT 300km Race started on schedule at 3:00 in the afternoon.
However, with rain falling on and off, the 66-lap race was started behind the Safety Car (SC).
By the end of the first lap behind the SC, the rain had mostly stopped and the SC was able to leave the course after a second lap. This started the actual racing from the third lap, and in grid position order, the pole-starting No. 17 KEIHIN NSX CONCEPT-GT (Toshihiro Kaneishi) held the early lead, but behind it the No. 100 RAYBRIG NSX CONCEPT-GT (Takashi Kogure) running in 4th position overshot on the first turn and went off the track. This allowed the No. 18 Weider Modulo NSX CONCEPT-GT (Naoki Yamamoto) to move up into 4th position behind the No. 8 ARTA NSX CONCEPT-GT (Kosuke Matsuura).

Gradually, the No. 18 Weider Modulo NSX CONCEPT-GT began pulling away from the 2nd-place car and the rest of the field. Meanwhile, a fierce battle for 4th position was raging with thrilling scenes like the No. 8 ARTA NSX CONCEPT-GT, No. 100 RAYBRIG NSX CONCEPT-GT and the No. 39 DENSO KOBELCO SARD RC F (Oliver Jarvis) running 3-abreast through the Prius Corner at one point, sending electrifying excitement through the gallery that had come out to watch the race despite the rain. However, as the rain grew heavier still, the Safety Car came out in the 10th lap to slow the race and lead the field at a controlled pace through the 17th lap before the red flag was finally brought out to stop the race at 3:44.
After that, however, the rain let up enough for the race to be restarted at 4:15 behind the Safety Car, running through the 18th lap.

Since the rain had mostly stopped at this point, the SC left the track after the 19th lap allowing the race to commence again. At that moment, the No. 36 PETRONAS TOM'S RC F (James Rossiter) passed the No. 39 DENSO KOBELCO SARD RC F (Oliver Jarvis) on the turn, but this move was later judged to be a violation start resulting in a penalty that dropped the No. 36 PETRONAS TOM'S RC F far back in the field after having battled up to 5th position at one point.

At this point in the race the leading cars began to make their routine pit stops, beginning with the No. 23 MOTUL AUTECH GT-R that returned to the pit after the 33rd lap. The No. 17 KEIHIN NSX CONCEPT-GT running in 5th position made its pit stop on lap 35, followed by the leading No. 18 Weider Modulo NSX CONCEPT-GT on lap 36. With this, the No. 100 RAYBRIG NSX CONCEPT-GT ran in the lead until its pit stop on the 40th lap, where the No. 12 CALSONIC IMPUL GT-R (Joao Paulo Lima De Oliveira) also made its pit stop. But, by this point there was little rain falling and the track conditions relatively stable, which led several teams to the decision to forego the tire change and return to the race as quickly as possible.
Having stretched out its first stint, the No. 24 D'station ADVAN GT-R (Michael Krumm) finally made its pit stop until the 44th lap and decided to send the second stint driver Daiki Sasaki back to the race on slick tires. What’s more, the No. 1 ZENT CERUMO RC F team, which had already completed its pit stop and sent second-stint driver Yuji Tachikawa back into the race, decided to make a second pit stop to change to slick tires. The teas were clearly struggling to cope with the changing rain and track conditions.

Entering the final third of the race, the No. 18 Weider Modulo NSX CONCEPT-GT (Frederic Makowiecki) continued to lead the race by a large margin and with a fast pace that kept at bay the 2nd-place No. 23 MOTUL AUTECH GT-R (Tsugio Matsuda) and the No. 32 Epson NSX CONCEPT-GT (Bertrand Baguette), which had been moving toward the front at an awesome pace through the slightly wet track conditions. Passing the 50th lap, the No. 24 D'station ADVAN GT-R and No. 1 ZENT CERUMO RC F now on slick tires were running at a pace faster than the leaders, but due to the size of their lead it looked as if the race would end before there would be any change in the order. But, with 10 laps remaining the rain began to fall hard again and conditions became so bad that the Safety Car was brought out for the second time on lap 59 and once again the No. 18 Weider Modulo NSX CONCEPT-GT had to watch its margin of lead disappear.
With a driving rain pounding down, tension ran through the pit area of the No. 18 Weider Modulo NSX CONCEPT-GT, where everyone knew that the victory they had almost grasped might be taken away if the race were restarted again. But, the race was not to be restarted and the field followed the Safety Car in order all the way to the checkered flag and the No. 18 Weider Modulo NSX CONCEPT-GT was assured its first victory of the season. It was a moment of jubilation not only for Yamamoto and the team but also for the entire Honda camp and the Honda fans that had been waiting so long for this first win. The No. 23 MOTUL AUTECH GT-R finished the race 2nd and the No. 32 Epson NSX CONCEPT-GT won the distinction of taking the third spot on the winners’ podium, in what was truly a Fuji round full of upsets and tribulation.

With these results, the top positions in the driver ranking remain unchanged, thank to the stubborn efforts of the 1st-ranked team No. 37 of Ito and Caldarelli and the No. 12 team of Yasuda and De Oliveira to finish 8th and 9th respectively and earn precious points in this race. By finishing 2nd in this race, the No. 23 team of Matsuda and Quintarelli moves into 3rd position in the standings. By winning this race the No. 18 team’s Yamamoto moves into 5th position in the standings.