Nakajima, Rossiter claim come from behind GT500 victory at Autopolis 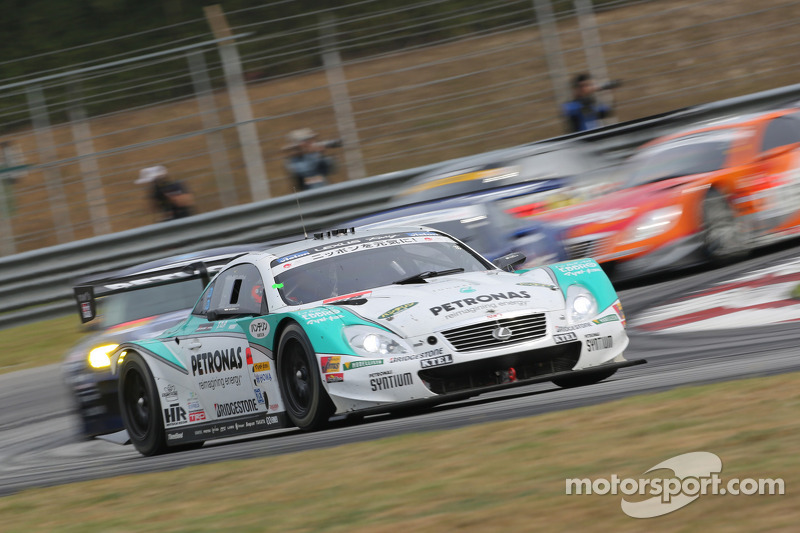 GT300 winners: Taniguchi and Kataoka in their BMW

The Super GT Kyushu 300mm race was held at the Autopolis Circuit in Pita Pref. It was the seventh round of the 2013 season. With unpredictable rain falling on and off there were frequent changes in the order of the cars as the race progressed, but with three laps remaining the No. 36 Petronas Tom’s Lexus SC430 driven by Kazuki Nakajima and James Rossiter came from behind to claim the GT500 class win. The GT300 class winner was the No. 4 GSR Hatsunemiku BMW driven by Nobuteru Taniguchi and Tatsuya Kataoka.

With yesterday’s qualifying having been cancelled due to rain and fog, the official qualifying was held this morning and the results saw the No. 38 Zent Cerumo SC430 (Yuji Tachikawa/Kohei Hirate) win the GT500 class pole position and the No. 3 S Road NDDP GT-R (Kazuki Hoshino/Daiki Sasaki) take the GT300 class pole.

The afternoon brought the start of the race at exactly 14:00 under cloudy skies. From pole position the Zent Cerumo SC430 (Kohei Hirate) made a good start and began to steadily open up a margin of lead over the pack. Behind it the followed two Nissan GT-R cars, the No. 23 Motul Autech GT-R (Ronnie Quintarelli) and the No. 1 Reitro Mola GT-R (Satoshi Motoyama), and behind them came the No.18 Weider Modulo HSV-010 (Naoki Yamamoto), the No.12 Calsonic Impul GT-R (Tsugio Matsuda) and the No.36 Petronas Tom’s SC430 (James Rossiter).

In the middle stages of the race light rain began to fall on and off, causing parts of the track to become very slippery and the presence of scattered bits of rubber from the tires made for very difficult conditions that caused some spinouts and machine collisions. Despite this, the No. 38 Zent Cerumo SC430 continued to run at a steady pace in the lead until the wheel was turned over to Yuji Tachikawa for the second half of the race. Meanwhile, behind the leader the order of cars was changing constantly.

In the latter stages of the race, the No. 36 Petronas Tom’s SC430 (Kazuki Nakajima) and the No. 17 Keihin HSV-010 (Koudai Tsukakoshi), having emerged from the battle for survival in the pack, were chasing the Zent Cerumo SC430 in the lead.

However, with about eight laps remaining in the race, the pace of the Zent Cerumo SC430 began to slow until the top three machines were all within one second of each other and battling fiercely. Finally, having the fastest pace, Nakajima in the Petronas Tom’s SC430 managed to pass Tachikawa in the Zent Cerumo SC430 with three laps remaining. Once in the lead the Petronas Tom’s SC430 ran on to win the race and claim its second victory of the season following the one in Round 2 at Fuji Speedway. This win moved the Nakajima/Rossiter pair up into 2nd position in the season standings. By finishing 2nd in this race, the Zent Cerumo SC430 pair of Tachikawa/Hirate moved into 1st position in the standings.

In the GT300 class race, the No. 4 GSR Hatsunemiku BMW (Tatsuya Kataoka) starting from 8th position on the grid ran strongly to rise to 3rd position in the early stages of the race and then moved into 2nd position after the routine pit stop. With Nobuteru Taniguchi now at the wheel, he charged on steadily despite the slippery track and was able to catch and pass the leading No. 50 Exe Aston Martin (driven first by Hideto Yasuoka and then Masaki Kano) and went on to win the race. This was the second win in a row for Taniguchi and Kataoka, having won Round 6 at Fuji, and it moved them up to 2nd position in the season standings. After starting from pole position, the No. 3 S Road NDDP GT-R (Daiki Sasaki to Kazuki Hoshino) had to retire from the race eventually with machine trouble. The No.16 Mugen CR-Z GT (Hideki Mutoh to Yuhki Nakayama struggled to finish in 8th position and add two season points to their total, which kept them in the Mutoh/Nakayama pair on top in the standings and poised to take the first championship title ever for a hybrid machine in the final round.

Kazuki Nakajima: “The morning qualifying left me with some frustration over the performance, but I was able to make up for that with this come-from-behind win, so it has been a great day. James [Rossiter] was running at a very good pace, so I had no worries about the machine’s performance. It took some time to move up to 2nd position, and that made the margin behind the leader a bit larger, but I was determined to close the gap and it turned out that the lead car No. 38 (Zent Cerumo SC430) was struggling and its pace was slowing. It became one of those races where you marvel at how well things can go.”

James Rossiter: “The qualifying was a tough one for us, but the race turned out very well and I was able to enjoy driving it. It really was a great race. Next is the final race of the regular season at Motegi, where we have run good times in the tests that made things look promising. So, I want to work hard with Kazuki [Nakajima] to win the race and take the championship title there.”

Nobuteru Taniguchi: “We only finished 8th in the qualifying, but in the first stint of the race [Tatsuya] Kataoka drove hard and got us up to 3rd position. When it was my turn at the wheel I was determined to pass car No. 3 (S Road NDDP GT-R) on the first lap out of the pit and then go out and catch the Aston (Exe Aston Martin), and in the end things went as I had hoped, so it turned out to be a perfect race. With this win, we will be going into the final round with a chance to win the championship title. It will be difficult to win the title on our own performance alone, but that makes me even more determined to try for the title.”

Tatsuya Kataoka: “Yesterday’s bad weather made it an exceptional one-day qualifying and race schedule. As with other rounds recently, the qualifying was difficult for us. But for the race we had some tire prepared for us that could keep us running at a constantly strong pace compared to the competition, which put us in a good position. We used a short first stint with the strategy that Taniguchi-san would catch the leaders in the second stint, so I was determined to push and move up in position as much as possible myself. So, it was great that I was able to do just that.”