The ARTA Honda team took an overdue first win of the SUPER GT season at Motegi as the front-engined NSX-GT locked out the top five places.

Tomoki Nojiri and Nirei Fukuzumi finally earned their first victory as a pairing in the #8 ARTA Honda NSX-GT in the penultimate round of the campaign, having failed to convert any of their three pole positions so far this season.

From second on the grid, Nojiri lost four seconds to the pole-sitting Nakajima Racing Honda of Hiroki Otsu in the early laps, but quickly closed back in and passed the Dunlop-shod car to take the lead at the start of lap 10 of 63.

Nojiri proceeded to stretch an advantage of almost 10 seconds over the field before handing over to Fukuzumi at the end of lap 23, becoming the first GT500 runner to pit, with Otsu following in to hand over the Nakajima car to Takuya Izawa.

That proved to be a masterstroke when the safety car was deployed to recover the stricken Team Mach Toyota 86 MC on the next lap.

When the race resumed on lap 28, around half of the remaining GT500 runners headed immediately for the pits, with the rest coming in over the following two tours, giving the ARTA and Nakajima Hondas a lead of over one minute.

From there, it was a straightforward run to victory for Fukuzumi, who brought it home for ARTA's first victory since last year's Okayama season opener, while some 46 seconds behind Izawa delivered Nakajima its first podium of the season. 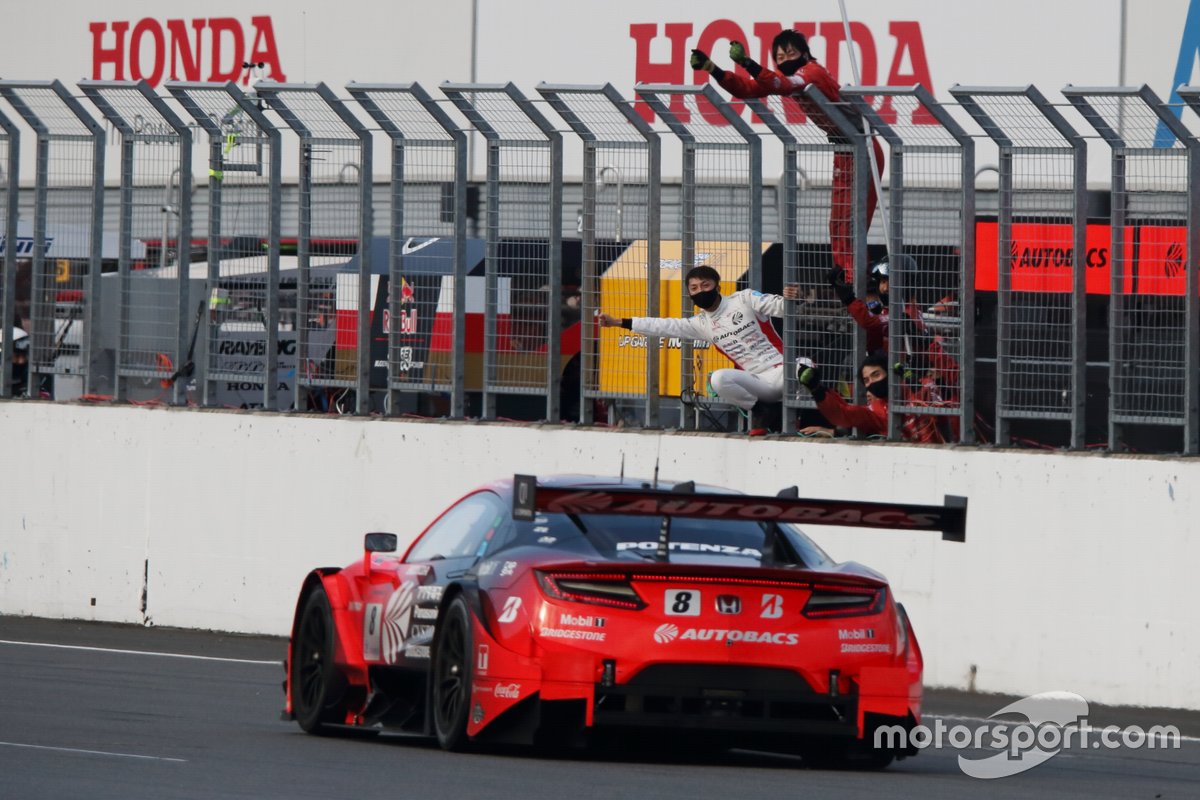 Completing an all-Honda podium was the #100 Team Kunimitsu car of Naoki Yamamoto and Tadasuke Makino. Prior to the safety car, Makino had been running in second and around eight seconds behind Nojiri, having passed Otsu for the place on lap 12.

On the restart, Makino stayed out for a lap before handing over to Yamamoto, which kept the #100 car clear of the chasing pack.

A similar strategy for the #16 Mugen NSX-GT of Hideki Mutoh and Ukyo Sasahara, which left it an extra lap to come in, propelled Sasahara to fourth, where he would remain to the end.

The battle for fifth took on extra significance as it determined who would head into the season finale leading the standings, and in the end it was the Real Racing Honda of Bertrand Baguette and Koudai Tsukakoshi who came through to complete an all-Honda top five.

Tsukakoshi passed the NISMO Nissan of Tsugio Matsuda for the place on lap 48 to put himself and Baguette on a provisional 51 points.

TOM'S Toyota man Ryo Hirakawa - sharing the #37 GR Supra with Kenta Yamashita for the last two races in the absence of Nick Cassidy - followed through for sixth to put himself on the same points tally as the Real Honda pair, but with one win this year to the #17 crew's two.

Matsuda managed to hang on to seventh in the #23 GT-R he shares with Ronnie Quintarelli and keep Nissan's title hopes alive, two points behind the Real Honda and level with the #100 Honda of Yamamoto and Makino.

ARTA pair Fukuzumi and Nojiri meanwhile are only three points off the lead, ahead of both the #14 Cerumo Toyota of Sho Tsuboi and Kazuya Oshima and the #36 TOM'S GR Supra of Yuhi Sekiguchi and Sacha Fenestraz, neither of which scored points. 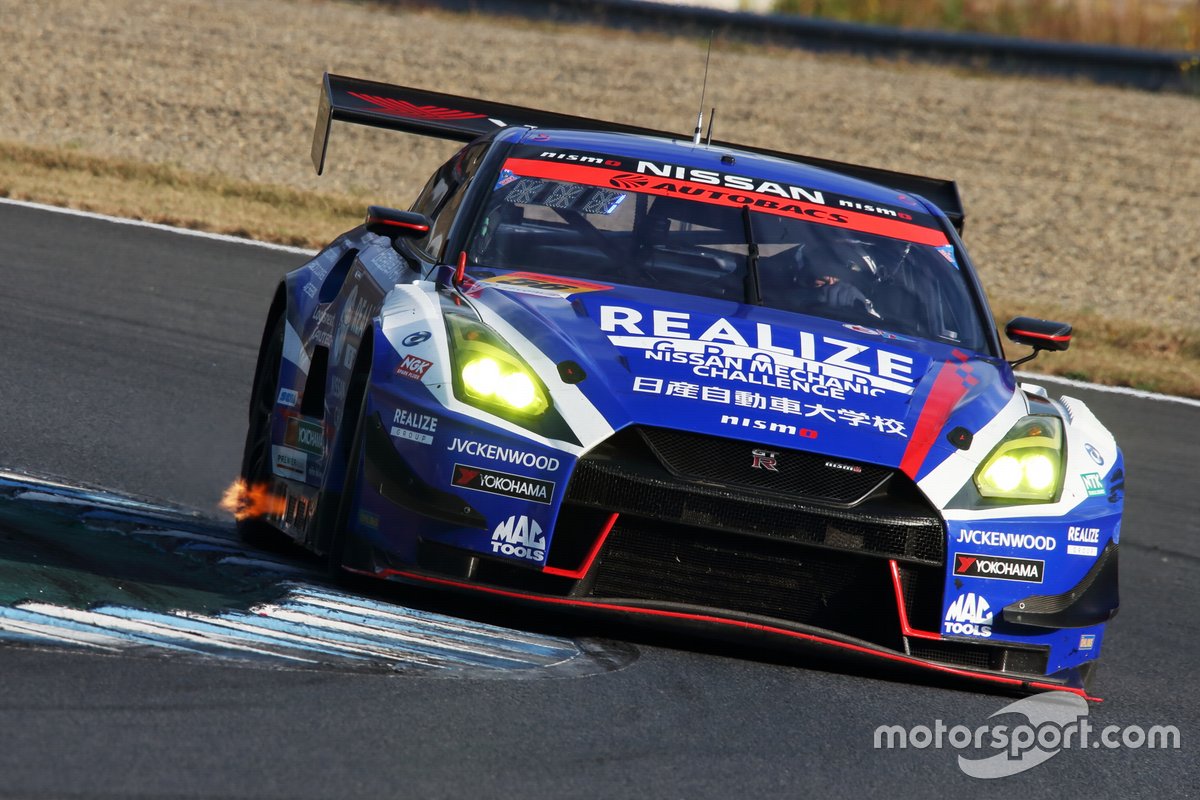 Running fourth early on, Fujinami was among the first drivers in the class to pit, and when the safety car was deployed, de Oliveira found himself promoted to second with only the Goodsmile Racing Mercedes-AMG GT3 ahead.

The Brazilian driver caught Nobuteru Taniguchi in the Goodsmile car and finally made an aggressive pass in the final sequence of corners to snatch the lead, earning himself a black-and-white flag in the process, and held on for a narrow win by just over a second.

With the points-leading LEON Racing Mercedes failing to score, it means de Oliveira and Fujinami lead the standings by five points heading into Fuji.

A lap behind the Goodsmile car of Taniguchi and Tetsuya Kataoka, a thrilling battle for the final podium spot was resolved in favour of the Tomei Sports Nissan, as Takayuki Aoki passed the Saitama Toyopet Toyota GR Supra GT300 of Hiroki Yoshida for third.

The title-contending #11 Gainer Nissan finished fifth on the road, but attracted the ire of the stewards as Katsuyuki Hiranaka tipped the pole-sitting Subaru BRZ into a spin late on.

Subaru man Hideki Yamauchi had built up a comfortable lead out front early on, only for the team to be caught out by the safety car for a second race in a row, but Iguchi was running as high as fourth late on before the contact, which demoted the BRZ to sixth.

That became fifth after the Gainer car was given a 30-second post-race penalty, which dropped Hiranaka and Hironobu Yasuda to ninth - leaving the pair trailing the Kondo Nissan by 13 points with 21 up for grabs in the final round at Fuji.