After a break of nearly 11 weeks, SUPER GT is finally back in action this weekend for its third round of the season at Motegi. But will Honda's 2020 dominance at the track continue, or is Toyota poised to strike back?

It feels like an age since the previous round of the SUPER GT season at Fuji, as if a second off-season took place since an epic Golden Week encounter that saw the Real Racing Honda of Bertrand Baguette and Koudai Tsukakoshi emerge with a memorable victory.

This weekend, the championship heads to Twin Ring Motegi for its first of two planned visits of the year to the Tochigi Prefecture track, which last year proved to be something of a Honda stronghold. Baguette and Tsukakoshi defied their 46kg weight handicap to win the September race, before NSX-GTs locked out the top five positions in November.

Motorsport.tv will be streaming live and exclusive SUPER GT Round 4 from Twin Ring Motegi – join today

How the main contenders stack up with ballast:

Both of those races were unusual in that they were the first Motegi races since 2016 to not be held as the season finale, meaning for the first time in four years teams had to contend with success ballast around a stop-start track layout where reduced fuel flow has a particularly deleterious effect.

That’s why Baguette isn’t especially hopeful of a repeat of his and Tsukakoshi’s miraculous victory last year aboard a NSX-GT that will be saddled with a stage one fuel flow restrictor.

“The target is to close the gap to the championship lead,” Baguette told Motorsport.com. “I’d be happy to be in the top five, as a lot of the quick cars are light. To win the race, we need rain or changing conditions. In a full dry qualifying and race it would be very tough.

“The weight is less of a handicap than the fuel restrictor, which costs us a lot of time and is a bigger disadvantage for Honda compared to Toyota for some reason. I would be really surprised if we can win. Top five is a realistic target and if we can do that, we can be happy.” 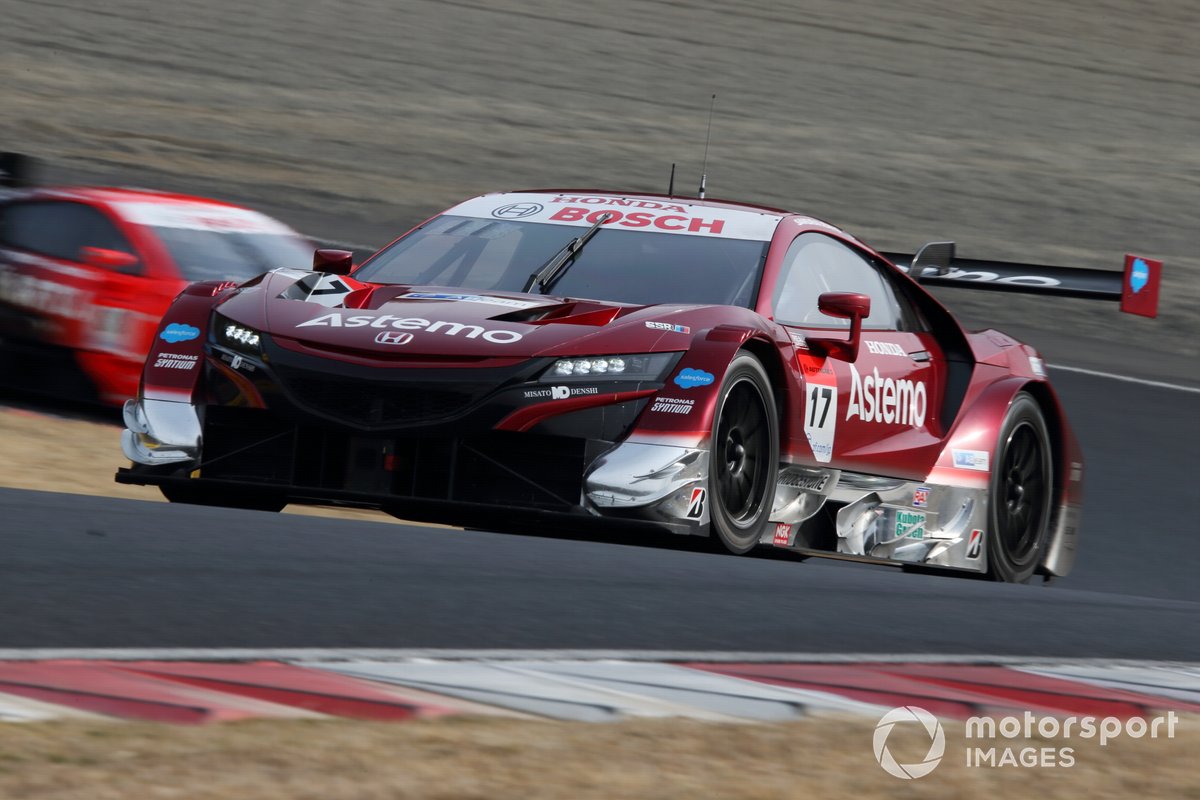 The good news for Honda is that, while the #17 car will be battling the odds with its handicap at Motegi, its other two Bridgestone-shod machines go into the weekend without much ballast.

The #1 Kunimitsu Honda – officially back to a two-driver crew of Naoki Yamamoto and Tadasuke Makino – will be carrying a manageable 22kg, while November winners Tomoki Nojiri and Nirei Fukuzumi will be hampered by only 14kg aboard the #8 ARTA NSX-GT.

Baguette calls the ARTA machine as the “big favourites” at Motegi, which is understandable given the #8 car will be the lightest of the three Bridgestone-shod Hondas and has won two of its last four outings at the track (Nojiri and Takuya Izawa won there in 2018).

But TOM’S Toyota man Ryo Hirakawa is hoping that things may not be so straightforward for Honda at Motegi this time around, and his optimism seems to be well-founded.

For one thing, the car Hirakawa will again share with substitute Sena Sakaguchi (Sacha Fenestraz remains no closer to obtaining the visa he needs to enter Japan) is carrying 46kg, the exact amount with which Baguette and Tsukakoshi won last year. And the GR Supra proved with a podium lockout at Okayama it can now excel on technical tracks as well.

“We have been working on this weakness of the Supra,” Hirakawa told Motorsport.com. “I think it can be different compared to last year, so I hope it’s not like last year [with Honda dominating]. We are getting better and better. so I hope it will be a different story.” 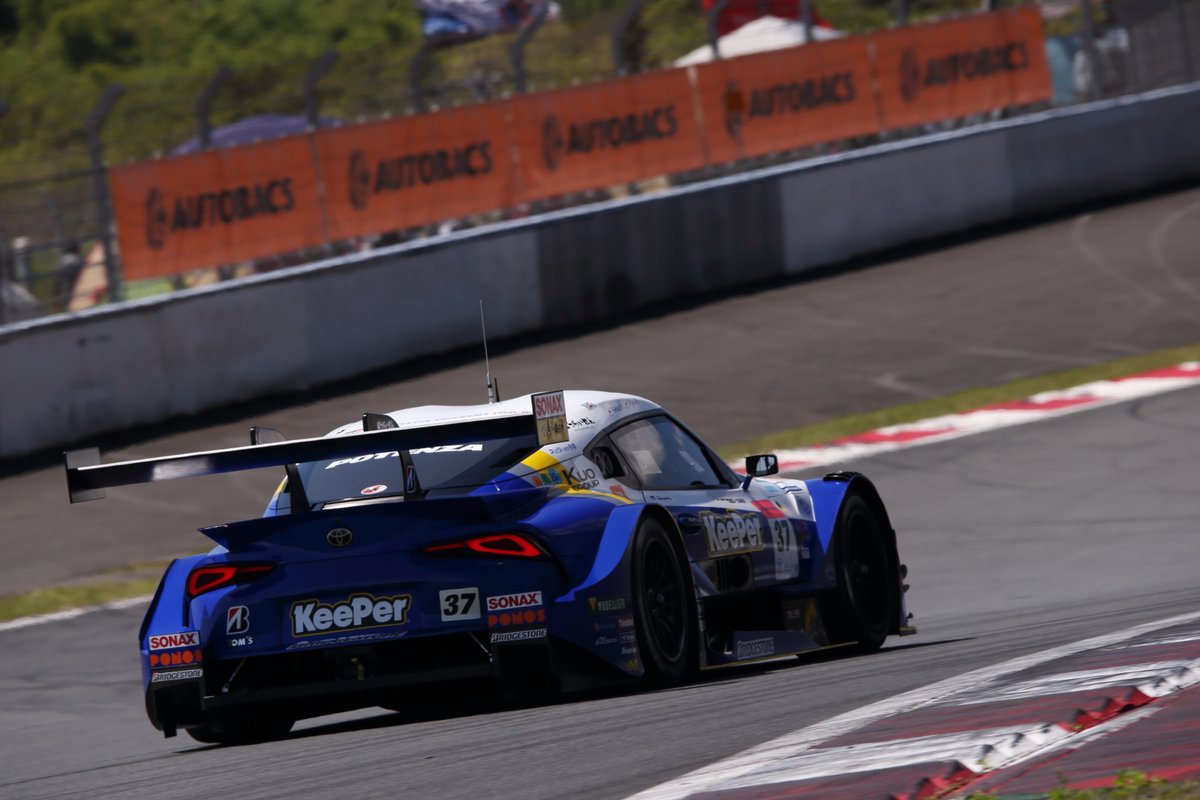 Hirakawa is aware that winning with 46kg of ballast, a handicap equivalent to almost half a second per lap, is a tall order. But a podium can’t be ruled out, especially when you consider the points-leading Rookie Racing car of Kenta Yamashita and Kazuya Oshima was second last time out at Fuji, and not far off winning, while carrying an extra 40kg.

“I think a podium is possible,” he added. ”Qualifying will be difficult, if we can pass Q1 that would be really good. The strategy options are limited, and the track is quite difficult to pass on. P5 or P6 would be ok, but if we have some luck, I think we could be on the podium.”

The #14 Rookie GR Supra is likely to struggle given it’s the only car carrying the stage two fuel flow restrictor this weekend, but the other Toyotas are likely to be in the mix. The #36 TOM’S car of Sho Tsuboi and Yuhi Sekiguchi (30kg) is should again be a threat, while the #38 Cerumo car of Yuji Tachikawa and Hiroaki Ishiura (10kg) showed well at Motegi last year.

Then there’s the #19 Bandoh Toyota, the only Yokohama user in the GR Supra camp. With temperatures forecast to exceed 30 degrees Celsius this weekend, Motegi could provide another chance for Yuji Kunimoto and Ritomo Miyata to shine after their Fuji pole.

Likewise, hot conditions are likely to favour Michelin, providing a boost to the so-far pointless (and therefore ballast-free) #23 NISMO Nissan of Ronnie Quintarelli and Tsugio Matsuda, which will also be using a fresh engine this weekend after its Fuji blow-up.

Barring a safety car at the wrong time that shuffles the pack (less likely with the introduction of the Full Course Yellow), the outcome will be heavily influenced by qualifying, which has been a big weakness of Honda in the opening two races of the season. Of the three Bridgestone-shod NSX-GTs, only the ARTA car has made it out of Q1 even once so far in 2021.

“Toyota still has a straightline speed advantage. so qualifying will be important, and it’s true Honda hasn’t been strong lately in qualifying,” acknowledges Baguette. “But Motegi is a track that suits our car really well, as we showed last year in the two Motegi races.

“We have to be careful about Toyota, they improved a lot compared to last year as we saw at Okayama, and even at Fuji the #14 car was still fast with a lot of weight. But I expect a Honda to win, to be honest. If Honda qualifies at the front, we’ll be difficult to beat.”