When McLaren took its Le Mans winner to Japan 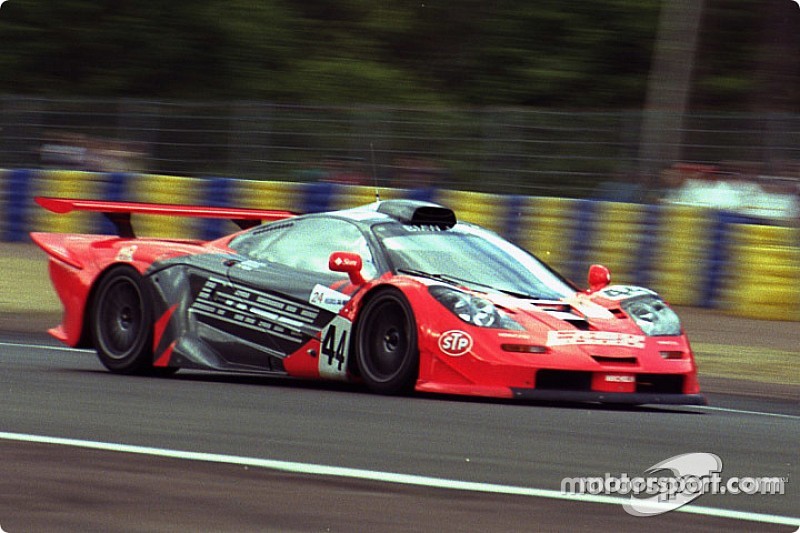 McLaren and Team Goh have joined forces for an assault on Super GT in 2019, reforming a partnership that not only yielded the series’ top prize but also added to the legend of the F1 GTR.

After conquering the Le Mans 24 Hours in 1995, McLaren built an upgraded version of the F1 GTR the following year in a bid to keep the car competitive against newer cars such as the Porsche 911 GT1.

Several new chassis were built to the new spec, and two of them found their way to the All-Japan Grand Touring Car Championship (JGTC), one of the the most prominent sportscar series at the time.

Run by Kazumichi Goh with full factory support from McLaren, the F1 GTRs went up against the mighty Nissan Skylines, the increasingly-threatening Toyota Supras as well as cars from Ferrari and Porsche’s stables.

Plus, there was the added prospect of McLaren rivalling its former Formula 1 engine partner Honda, which was also joining JGTC on the back of its own (class) win at Le Mans.

The only issue was that the F1 GTR wasn’t originally built to race against the GT500 cars that comprised the top class of the JGTC. Simply put, McLaren’s legendary car was too quick for the best Japan had to offer.

As such, Goh and McLaren had to accept performance hits to ensure parity with its Japanese rivals; most notably the F1 GTR's 6-litre BMW engine had to be de-tuned to produce just 450bhp.

What McLaren lost in terms of power and performance, it made up for it with a star-studded driver line-up.

1990 Le Mans winner John Nielsen and David Brabham were signed to share the #61 F1 GTR, while Japanese racing star Naoki Hattori and a then fresh-faced Ralf Schumacher formed an equally strong pairing in the #60 car. 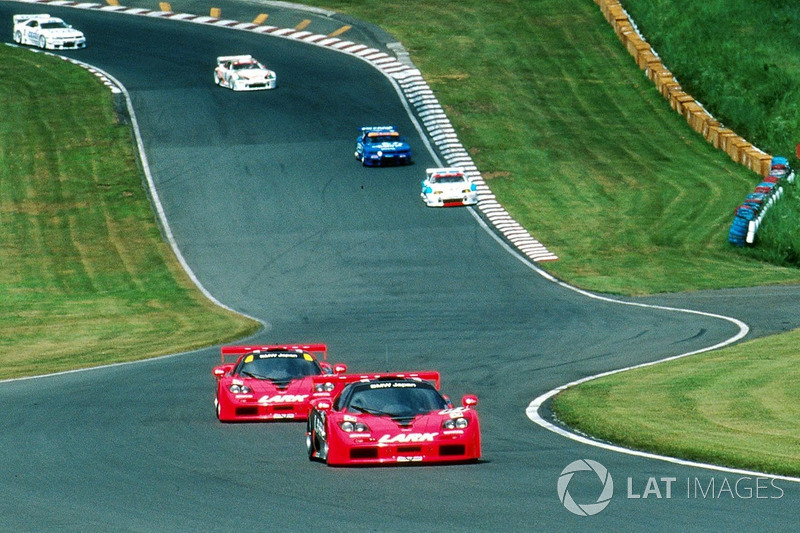 The first test of the F1 GTR came at Suzuka, home of Honda and a track where McLaren claimed several of its grand prix titles.

In tricky wet conditions, Hattori put the #60 McLaren he shared with Schumacher on pole position, marking an auspicious debut in the series.

McLaren’s advantage in a dry race was less evident, with the #37 Cerumo Supra of former F3000 champion Erik Comas and Hinori Takeuchi seizing the lead early.

However, as the race wore on, Schumacher started reeling in the Toyota, snatching back the top spot in the second half to score McLaren’s first JGTC win.

Comas and Takeuchi’s Toyota eventually retired with technical problems, allowing Nielsen and Brabham - who had made their way up from 13th on the grid - to complete a 1-2 finish for McLaren.

Nielsen and Brabham won next time out at Fuji, establishing McLaren as a serious championship challenger, but not all was going well on the other side of the garage.

Hattori and Schumacher retired from Fuji and also suffered costly DNFs at the the following two rounds, where the Japanese manufacturers fought back to claim back-to-back wins. The #37 Toyota won at Sendai, while the #1 Hoshino Nissan was victorious in the second Fuji race. 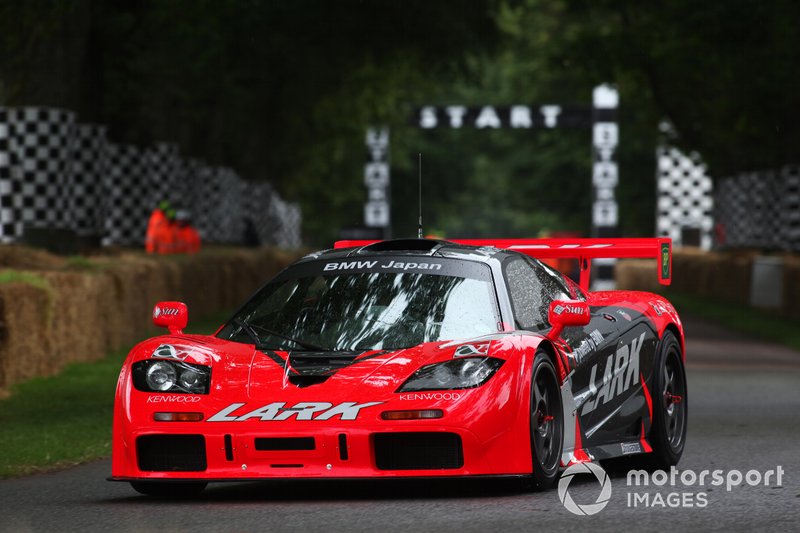 McLaren had no answer to Toyota and Nissan on those two weekends, but Nielsen and Brabham had managed to consistently score points, allowing them to lead the championship heading into Sugo, the penultimate round of the season.

It was on this occasion when their luck ran out. Brabham’s #61 McLaren suffered a huge side contact from a Porsche early in the race, forcing an immediate retirement.

It turned out the damage to the car was so severe that the team had no option but to write off the chassis.

Team Goh looked around and borrowed an old-specification GTR for the season finale, ensuring Brabham and Nielsen could fight for the title.

With the older F1 GTR simply not quick enough, Schumacher and Hattori claimed a relatively easy win from pole position in the current-spec car - their third victory of the season and second in a row.

Brabham and Nielsen could only finish fourth, but that was enough to clinch the crown. With it, McLaren became the first and the only non-Japanese manufacturer to win the title in the premier class of JGTC.

Goh and McLaren wanted to return to the series for a second season, but the Japanese manufacturers, who had effective control over the technical regulations, weren’t keen on another humiliating defeat on home turf.

Faced with the prospect of unfavourable rules, Goh and McLaren called time on their JGTC stint and the F1 GTR disappeared from the grid in 1997. 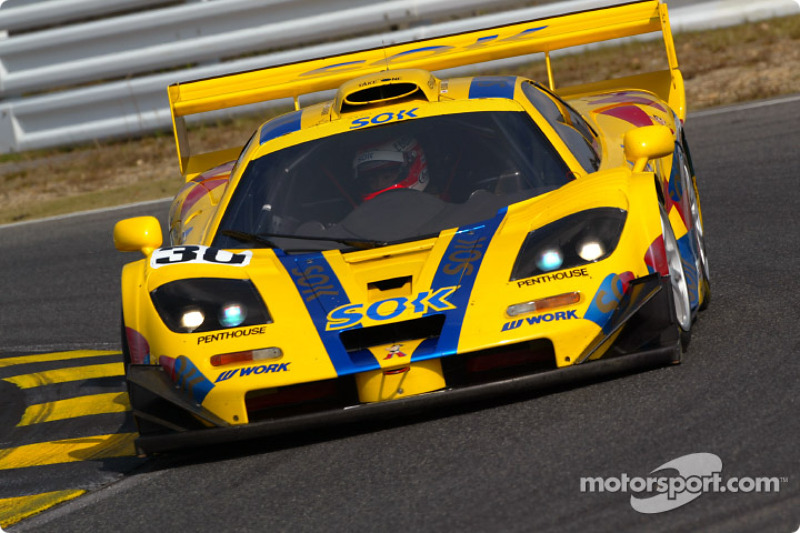 Some customer teams, having seen the F1 GTR's prowess first hand, purchased several examples of the car and pitted them against the Japanese giants in years to come.

In 2001, Team Take One even managed to take an overall win at the Mine Circuit, displaying just how quick the F1 GTR remained after the end of its heyday. It remains the last win for a non-Japanese car in JGTC/Super GT.

Interestingly, JGTC’s successor Super GT was also the scene of the last competitive outing for a McLaren F1 GTR. That monumental moment occurred in 2005 at Fuji as part of Team Hitotsuyama two-race effort to revive the car.

As for Team Goh, it struck up a successful partnership with Audi in Europe, one that culminated in an overall victory at Le Mans in 2004 with a customer R8.

Team Goh was last seen at the legendary race in 2009, when it fielded a Porsche RS Spyder in the LMP2 class.

However, McLaren’s new 720S GT3 car, coupled with the memories of the 1996 season, has brought Team Goh back to competitive motorsport for the first time in over a decade.

And much like the last time, team boss Kazumichi Goh is ambitious as ever, with its Super GT and Super Taikyu campaigns supplemented by planned appearances in the 2020 Intercontinental GT Challenge.

While its presence on the GT300 grid means it will not be able to challenge for the overall Super GT wins, its return to the series in itself is nonetheless worth celebrating.