Matsuda and de Oliveira earn first win in 2012 at Fuji

CALSONIC IMPUL GT-R Takes Its First Win of the Season

GT300 class win to Porsche after the Toyota Prius battles it to a first 2nd-place finish for a hybrid car!
The Honda hybrid car finishes 3rd

The FUJI GT 300km RACE, round 6 of the 2012 AUTOBACS SUPER GT series, was held on Sept. 9th at Fuji Speedway (one lap 4.563 km × 66 laps) in Shizuoka Pref. Before a large gallery of more 33,000 spectators, the GT500 class race was won in magnificent pole-to-win fashion by the CALSONIC IMPUL GT-R (Tsugio Matsuda/Joao Paulo de Oliveira). The team gave manager Kazuyoshi Hoshino his first win of the season and a spot in the title race over the next two rounds.

First of all, I am relieved that we have won.

Having qualified fastest (pole position) in Saturday’s qualifying, the CALSONIC IMPUL GT-R got a great start in the hands of the first-stint driver and began to pull away from the Tsugio Matsuda S Road REITO MOLA GT-R (Ronnie Quintarelli) in 2nd position and the KeePer Kraft SC430 (Andrea Caldarelli) and the rest of the field. The NISSAN GT-R and LEXUS SC430 cars from 3rd position back changed position frequently in fierce battles. However, Matsuda in the CALSONIC IMPUL GT-R continued to build his lead over the field to nearly 10 seconds. When Matsuda returned for the routine pit stop, the team refueled the car and changed the tires with no hitches and Joao Paulo de Oliveira got the car back in the race as the second-stint driver. De Oliveira went on to widen the gap over the S Road REITO MOLA GT-R (Masataka Yanagida) in 2nd place even further, breaking the usual SUPER GT pattern of close finishes to deliver a true runaway victory with a margin of more than 20 seconds at the checkered and bring the team its first victory of the season.

For the NISSAN GT-R it was the second win of the season, following the victory in the last round at Suzuka. Or the CALSONIC IMPUL GT-R team it was its first victory since May of last year at Okayama. This win moved the Matsuda/De Oliveira team (NISSAN GT-R) up to 4th position in the series ranking. By finishing 2nd in this race, the Yanagida/Quintarelli driver pair (NISSAN GT-R) sits at the top of the ranking while the two LEXUS SC430 driver pairs of Yuji Tachikawa/Kohei Hirate and Juichi Wakisaka/Hiroaki Ishiura rank in at 2nd and 3rd respectively. With two races remaining in the season the title race is nearing its climax. 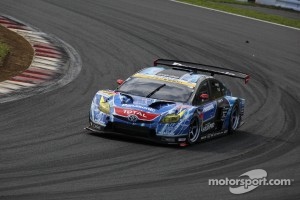 In the GT300 class, the hybrid apr HASEPRO PRIUS GT (Morio Nitta) that started from pole position suffered a spin at the first turn after the start and had to work back from the tail end of the pack. This gave the lead to the HANKOOK PORSCHE (Masami Kageyama) that started from 2nd position on the grid. But, the push from the rear by Nitta in the PRIUS GT, and later by Koki Saga in the second stint was truly awesome. With 15 laps remaining in the race, the PRIUS GT now driven by Saga was closing in on the tail of the leading HANKOOK PORSCHE (Tomonobu Fujii), and on the 53rd lap Saga tried to pass Fujii. The result was a collision that caused the PRIUS GT to spin out. This gave the HANKOOK PORSCHE plenty of lead to run home easily to victory and give the Kageyama/Fujii pair their second win of the season, following a victory in round three.   Having dropped to 3rd after the spin, the PRIUS GT battled with the other hybrid car in the race, the MUGEN CR-Z GT (Hideki Mutoh/Daisuke Nakajima) that had moved up to 2nd, and managed to pass the CZ-R (Nakajima) with two laps remaining. Although it failed to claim the first GT victory ever by a hybrid car this time, the PRIUS GT did manage to outrun its hybrid rival, the Honda CR-Z, to claim the honor of being the first hybrid to finish 2nd in a SUPER GT race. (Spectarors: 33,800)

Tsugio Matsuda: “First of all, I am relieved that we have won. In round two here at Fuji in May we were in the lead but failed to get the win, and after that we suffered a series of upsets that kept us from winning. But this win has blown away all that frustration. Yesterday, JP (De Oliveira) got us pole position, so I was determined to start the race well and build up a lead to give to JP for the second half. Then JP went on and increased the gap even more. He is the best teammate you could have.” 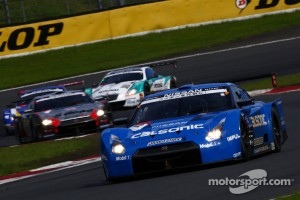 Joao Paulo de Oliveira: “This weekend was just a perfect weekend. In yesterday’s qualifying we ran well from the beginning and were able to get the pole position. And today as well, we were able to improve on the set-up well during the warm-up session. In the first half, Tsugio [Matsuda] did the tire management well and got a good margin of lead for us. So, for my part, all I had to do was keep that lead and drive on to the end, which made it very easy. I want to express my appreciation to my teammate, the team, Nissan and NISMO and all the people who support us.”

Masami Kageyama: “Today, I was beset by worries from the morning session, so Fujii didn’t get much time to drive. But, he drove so well for us [in the second half] and avoided any dangers. He is truly a dependable teammate. This is the first time for a Hankook tire machine to lead the ranking, and our weight handicap will be cut in half for the next race at Autopolis and then eliminated completely for the last race at Motegi. It was the handicap weights that were our biggest worry this time. We were able to race well at Motegi last year, so in the two remaining races we will be aiming for the championship.”

Tomonobu Fujii: “We were able to get the “best possible result” that we came to this circuit to get. However, there were still some issues [during the race] and the strategy was to manage the tires well so that even if we didn’t win the race we could at least get 2nd place for sure. So, during my stint I did push during the early going but the Prius closed in on me, I wasn't going to take any unnecessary chances by trying to block it. Then, in the end the Prius spun out, and fell back. I am really happy that we have gotten our second win of the season.”