Sekiya, 70, first joined TOM'S back in 1983 and embarked on a decade-long stint driving Group C machinery for the team including seven Le Mans starts starting in 1985.

His best finishes came in 1992, when he, Pierre-Henri Raphanel and Kenny Acheson finished second at the wheel of a Toyota TS010, while the following year he, Eddie Irvine and Toshio Suzuki finished fourth.

After a year away from La Sarthe following the collapse of Group C, Sekiya was part of the line-up of the race-winning Kokusai Kaihatsu McLaren F1 GTR alongside JJ Lehto and Yannick Dalmas on his return to the race in 1995 (pictured below). 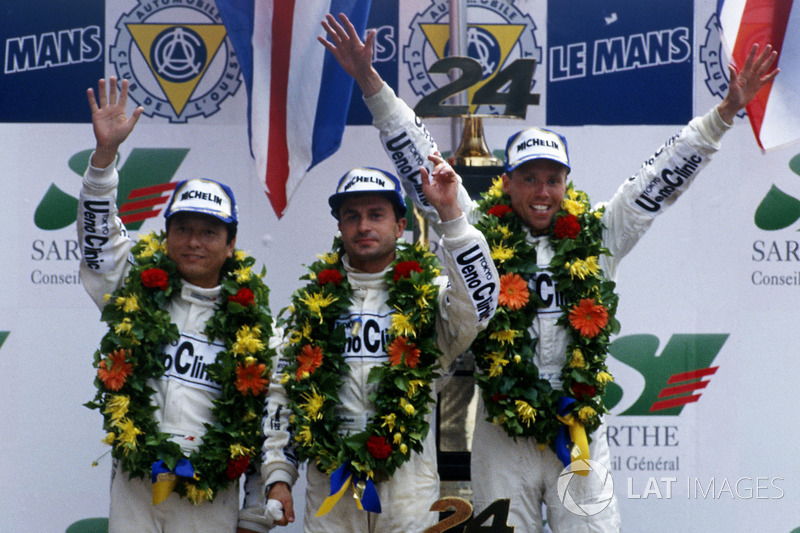 Two more Le Mans starts followed, one for SARD in 1996 in a Toyota Supra LM and another in a McLaren for GTC Racing in '97, but these both ended in retirement.

Sekiya had also established himself as a touring car ace in Japan, winning two Japanese Touring Car titles for TOM'S in 1994 and '98, the final year of the series.

From 1995 to 2000 he was also part of the TOM'S All-Japan GT Championship line-up, winning three races in that time and scoring a best finish of second in the points alongside Takuya Kurosawa in 1999 at the wheel of the legendary Castrol-liveried #36 Supra.

After retiring from driving duties, Sekiya moved into a team director role from 2001 onwards, and following JGTC's transformation into SUPER GT he oversaw two titles for TOM'S pair Juichi Wakisaka and Andre Lotterer in 2006 and 2009.

He switched to overseeing the team's second entry in 2013, earning a third title as team director in 2017 with Ryo Hirakawa and Nick Cassidy (pictured top in 2018).

For 2019 he stepped down to a sporting director role at TOM'S and at the end of March this year he parted company with the organisation completely.

In future Sekiya will focus on organising and promoting the Toyota-backed Inter Proto Series in Japan, and on his role as chairman of the Toyota Motor Sports Club.