Lexus and Toyota claim pole positions at Okayama for first round 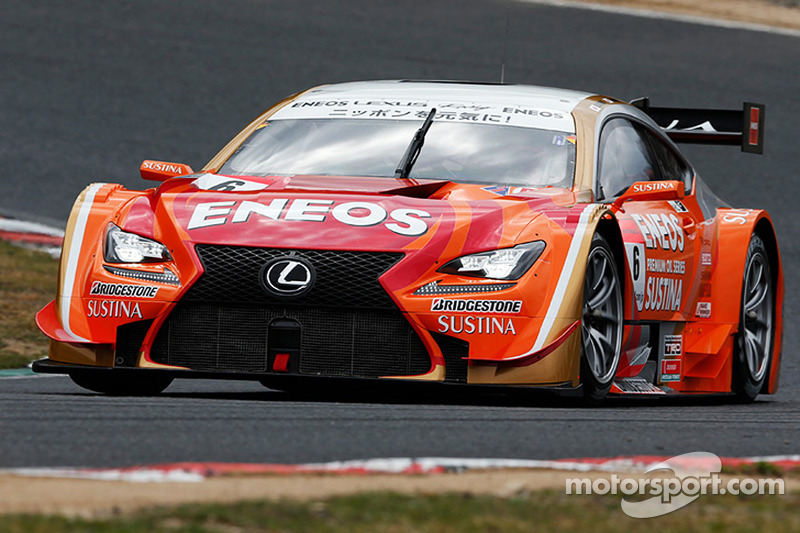 The starting lineup has been decided for the 2014 Autobacs Super GT season opener.

The qualifying for the OKAYAMA GT 300km RACE, Round 1 of the 2014 AUTOBACS SUPER GT was held at the Okayama International Circuit (one lap 3.703 km) in Okayama Prefecture on April 5. In the GT500 class, where all the entries are new cars this season, the No. 6 ENEOS SUSTINA RC F driven by Kazuya Oshima and Yuji Kunimoto won pole position. In the GT300 class, the No. 31 OGT Panasonic PRIUS T won the class pole. With this result, these two cars will start from front position on their respective class grids in the final race on April 6.

Although rain was predicted by the weather report for qualifying day in Okayama and the skies over the circuit remained cloudy, the expected rain never fell. However, the air was chilly and the competition had to be run in what felt like a return to winter temperatures. The official qualifying to decide the grid positions for tomorrow's race began at 2:00 in the afternoon. The qualifying was conducted in a "knock-out" format with two sessions, Q1 and Q2.

In the Q1 session for all entries, the teams had 15 minutes to run their timed laps, with the eight fastest teams then qualifying to move on to Q2. Due to the new machine regulation for this season, all the cars in the GT500 class are completely new models, making this opening round an important first test of the development efforts of the three competing automakers. The result was a close-fought battle between the new Lexus RC F, Honda's new NSX CONCEPT-GT and Nissan's new GT-R. The qualifying began with Daisuke Ito in the KeePer TOM'S RC F scoring the fastest time in Q1. His time of 1'19.862 broke by a big margin the Okayama course record of 1'22.404 set back in 2004, and the fact that all 15 cars competing also broke the old record was a sure indication of how fast this season's new cars are.

In Q2, the No. 6 ENEOS SUSTINA RC F team's ace driver Kazuya Oshima, having finished 4th in Q1, went all out from the start of the second session because of concern for the possibility of rain. On just his fourth lap, he ran an awesome time of 1'19.404. In response to this, Joao Paulo de Oliveira in the No. 12 CALSONIC IMPUL GT-R charged hard and ended up a mere 0.070 sec. short of Oshima's time. This gave the No. 6 ENEOS SUSTINA RC F team and Kazuya Oshima a second consecutive pole position, following the one at last season's final round.

For Oshima, this was his fourth PP in the GT500 class, and for the RC Fit was a rewarding debut pole.

In the GT300 class, Morio Nitta in the No. 31 OGT Panasonic PRIUS hybrid car scored the fastest time of 1'26.774 to beat the course record by more than 2 seconds and win pole position. For the veteran Nitta this is his eighth career pole and for the Prius it is the second PP, following one in 2012. This was also the fifth PP for a hybrid car in the GT300 class.

Kazuya Oshima - No. 6 ENEOS SUSTINA RC F [GT500]: "To be honest, I didn't expect to be able to run such a fast time. In Q1 [Yuji] Kunimoto ran a good time despite some machine trouble, so I was actually feeling pressure [to perform well too]. I haven't gone into a qualifying session with this much tension and excitement in a long time. But, I was able to keep from letting over-excitement ruin my session and succeeded in getting pole position. Things were going well from our first shakedown here at Okayama, but that was only because everyone on the team was working hard almost through the night, day after day. I'm glad I was able to get pole position and pay them pack for all that effort."

Morio Nitta - No. 31 OGT Panasonic PRIUS [GT300]: "From the pre-season tests, things had been going well and we had been getting good times. But, since we were running with different settings from the ones we used in the Okayama tests, there were also some worries. It is thanks to the great machine that the team has prepared coming into this season opener, and the great tires that Yokohama Tire prepared for us, that we were able to get pole position. I hadn't really expected to see a top time in the 1'26 range in Q1, but by pulling out all the stops and pressing hard, I was able to get there."

Around the world in seven days with Lucas Ordonez