Kazuki Hiramine and Nobuharu Matsushita delivered Impul its first GT500 victory since the 2016 Fuji 300km on Sunday aboard the iconic Calsonic-liveried #12 GT-R, as well as a second win in succession for Nissan.

It came after the car that had controlled much of the race, the polesitting #8 ARTA Honda NSX-GT, was dropped out of contention due to a series of penalties stemming from a pitlane infraction.

Hiramine inherited the lead at that stage, and held on from the #17 Real Racing Honda of Koudai Tsukakoshi following a late safety car period, ultimately crossing the line with 8.511 seconds in hand at the end of the 83-lap contest.

“It’s been too long,” Hoshino told the official SUPER GT website. “We were chasing it for a long time but I couldn’t get the results… it was hard for me.

“[In the race] I was afraid of what could happen until the end. When the safety car came out, I thought ‘oh no!’, but after the #8 car got its penalty, we just kept going, building our advantage tenth by tenth. During that time I was worried about the team and I prayed there would be no mistakes.

“I feel more relieved than happy, it’s been really hard. Up to now we didn’t get the results, and I ‘fired’ myself many times! It feels like I was barely able to survive. I’m really relieved, and from now I’ll fight with all my strength.” 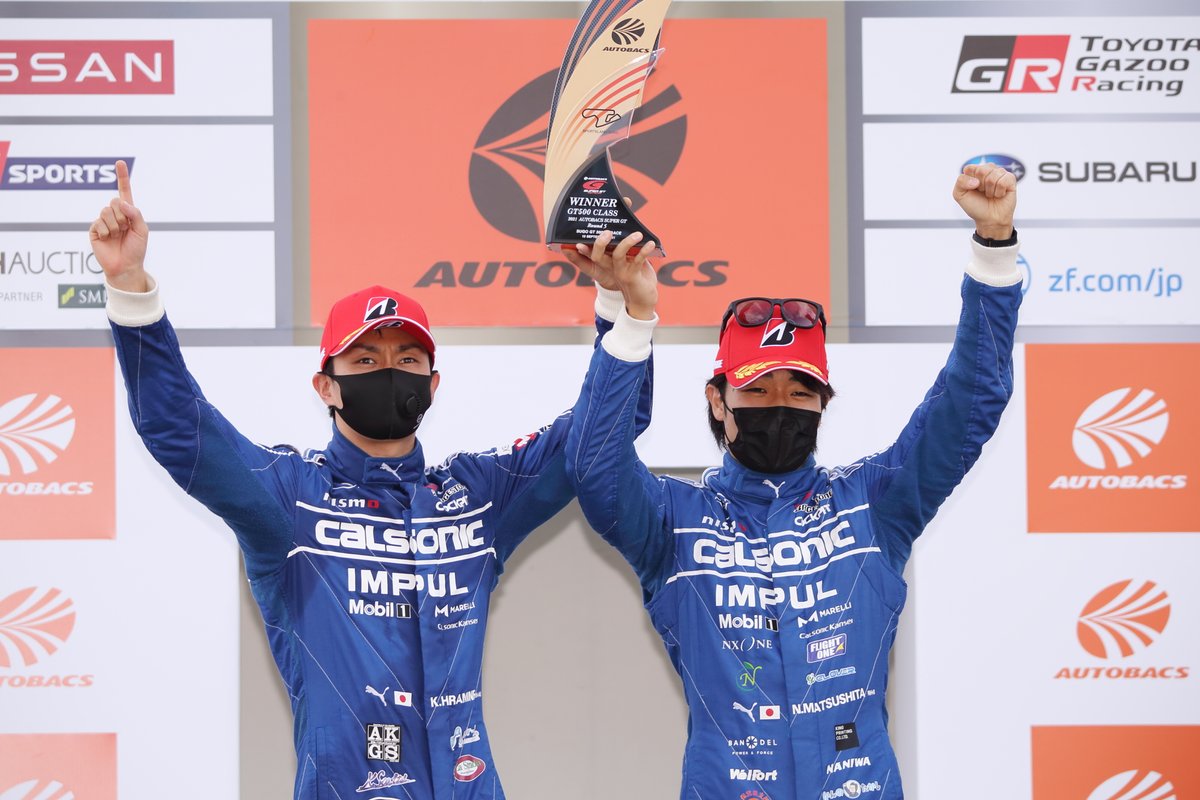 Matsushita took the opening stint from third on the grid and spent the opening 15 laps behind Toshiki Oyu in the #16 Mugen Honda before being passed by the #17 Real Racing Honda of Bertrand Baguette.

However, with Baguette unable to find a way back ahead of a fading Oyu, Matsushita managed to repass the Belgian on lap 20 and pick off Oyu, holding second place until handing over to Hiramine on lap 33.

Hiramine maintained a net second through the pitstop phase, which became the lead when the ARTA Honda was penalised, although the Impul driver had to work hard to keep Tsukakoshi in the Real Honda at bay.

“At first it was tough to warm up the tyres, and on the first lap of my stint, the #17 car came up right behind me,” reflected Hiramine, who stepped up to Impul for his rookie GT500 season last year in place of James Rossiter.

“If I had been passed here, it would have been a stain on the Impul name, so I pushed to the maximum and somehow I stayed ahead. After that, there was some traffic and the gap fluctuated, but in the end I was able to make a gap, which was good.

“Up to this point I had been wondering when I would be able to win in GT500, but being able to win this race, it feels like the gloomy feeling I had has suddenly gone away.

“We were able to break the bad trend and get the result we had been working so hard for, and from now on I want to continue displaying our strength.”

Sugo also marked a first SUPER GT victory for GT500 rookie Matsushita in only his fifth start in the top class, following a tough first four races of the season that yielded a best finish of sixth.

“This year we have really struggled in GT,” said the sometime Formula 2 race winner and ex-Honda junior. “This time we had a light car [carrying only 16kg of success ballast], but one thing I want to say is that ‘a win is a win’.

“It’s been a long time since I competed in a race like this with so many sponsors and spectators, so I’m really happy to win here.”