Honda drivers Naoki Yamamoto and Tadasuke Makino took the SUPER GT title away from Toyota man Ryo Hirakawa at the end of a thrilling season finale at Fuji Speedway.

Yamamoto stole a last-gasp victory from the #37 TOM'S GR Supra of Hirakawa and Kenta Yamashita that had dominated the majority of the race, as Hirakawa ran out of fuel exiting the final corner on the last lap.

That allowed Yamamoto and Makino to overturned their pre-race deficit of three points to Hirakawa and take a second title for the Team Kunimitsu squad in three years.

It marks a second GT500 crown for Yamamoto, who followed up on the success he achieved in 2018 alongside Formula 1 world champion Jenson Button, and a first for ex-Formula 2 driver Makino, coming in the final race for long-time sponsor Raybrig.

It's also Honda's fifth title in SUPER GT's top class and its first with a front-engined car since 2010, coming in the first season with its new-for-2020 NSX-GT. 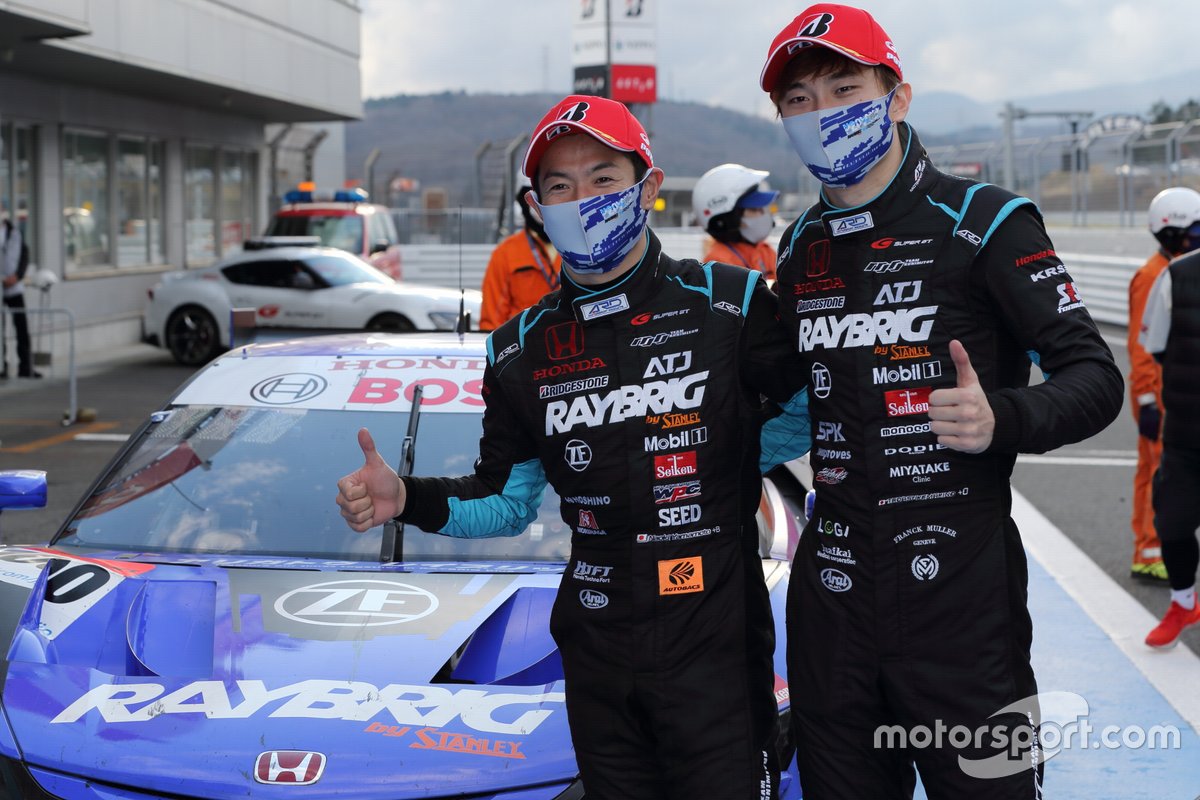 Yamashita took the start from pole in the #37 car, but as he struggled to warm his tyres in the wintry conditions on the opening lap he dropped to second behind Ronnie Quintarelli in the works Nissan GT-R.

Quintarelli had a storming first lap from sixth on the grid, gaining two places in the opening corners and then sweeping around the outside of three Toyotas - Yamashita, Heikki Kovalainen's SARD car and Sacha Fenestraz in the #36 TOM'S car - into Turn 10.

However, Nissan's time out front was short-lived, as Quintarelli in the Michelin-shod car was soon caught by the Bridgestone-equipped Toyotas. On lap seven, with his tyres now up to temperature, Yamashita re-passed Quintarelli and by the end of that tour the outgoing champion was 2.6 seconds to the good.

Two laps later Yamashita was five seconds in the clear, as Quintarelli came under attack from Fenestraz in the battle for second. Kovalainen meanwhile had been eliminated from contention after sustaining damage in a collision with Fenestraz.

As Quintarelli fell down the order, apparently struggling with tyre pick-up, Yamashita's advantage over the field rose to 18s by the time the pit window opened on lap 22.

But there was another scare for the #37 crew when they were leapfrogged by the #14 Cerumo Toyota of Sho Tsuboi and Kazuya Oshima, who gained a huge chunk of time by electing not to change their Bridgestone tyres in the pits.

Tsuboi, who had moved up to a net second with the fast stop, took advantage of his warmer tyres to pass a struggling Hirakawa on his out lap at Turn 3.

However, Hirakawa struck back just one lap later at the same corner, and proceeded to build a 15s advantage over the field in the first half of his stint. 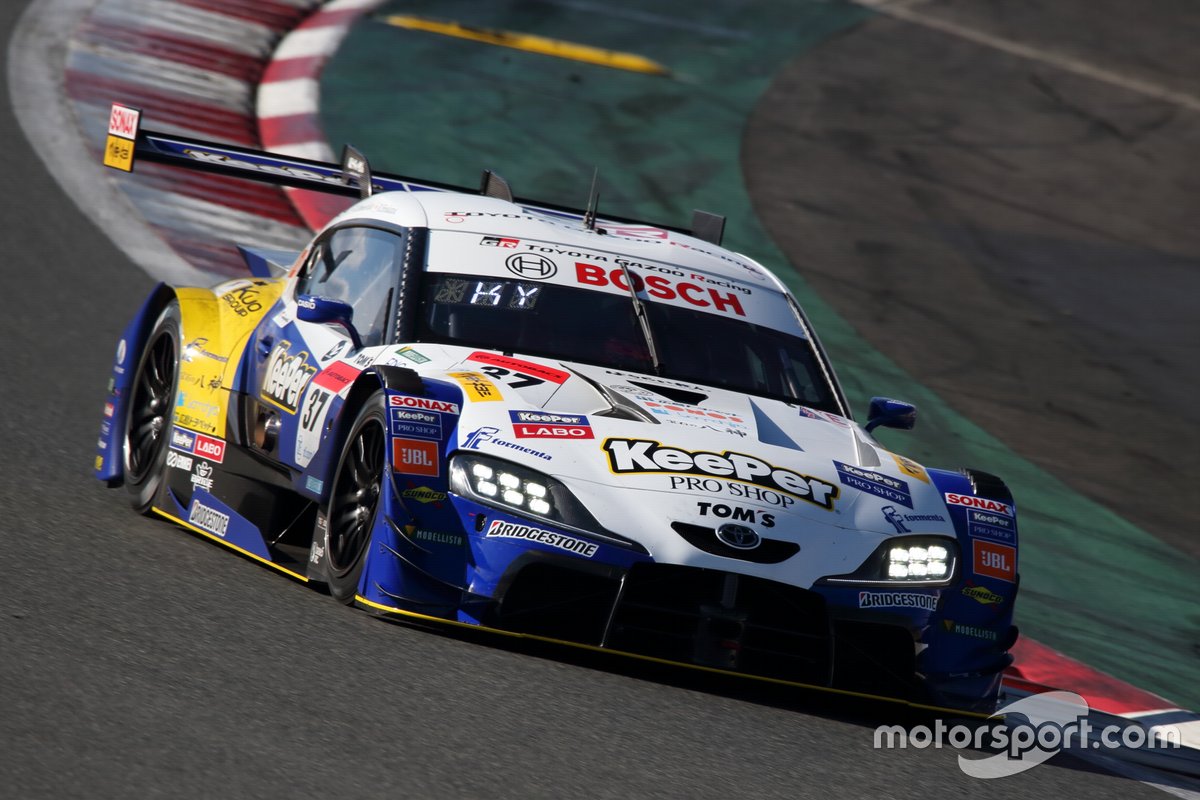 Tsuboi was rapidly reeled in by the #36 TOM'S Toyota, now driven by Yuhi Sekiguchi, and another bout of intra-Supra contact - this time at Turn 1 - left the Cerumo car with ultimately terminal damage and allowed Yamamoto to pass both cars at Turn 1, elevating him to the status of Hirakawa's closest challenger.

By lap 54, Yamamoto had got the gap down to less than 10 seconds, and the differential started to fall by a second a lap in the closing stages. With three laps remaining, Hirakawa's margin was down to just two seconds.

Hirakawa had appeared to stem the tide and looked on course for victory until his Toyota dramatically slowed exiting the final corner in scenes reminiscent of the marque's Le Mans 24 hours defeat in 2016. Both Hirakawa and Yamamoto stopped on track on the slowing-down lap, indicating that the Honda had also been marginal on fuel.

Coasting over the line in second, Hirakawa lost the chance to become SUPER GT's first solo champion since Ryo Michigami in 2000 - which would have been a quirk of regular teammate Nick Cassidy being forced to miss the final two races of the year.

Sekiguchi came home for the final spot on the podium in the second TOM'S car he shares with Fenestraz, 16s down at the finish.

Real Racing Honda pair Bertrand Baguette and Koudai Tsukakoshi recovered from their qualifying position of 12th to finish fourth, ahead of ARTA pair Nirei Fukuzumi and Tomoki Nojiri, but lacked the race pace needed to challenge for the title.

Best of the Nissans at the finish was the #3 NDDP/B-Max GT-R of Katsumasa Chiyo and Kohei Hirate in sixth, followed by the Impul car of Daiki Sasaki and Kazuki Hiramine.

From fourth on the grid, the sole remaining Cerumo Toyota of Yuji Tachikawa and Hiroaki Ishiura had a race to forget, slipping to an eventual eighth ahead of the NISMO Nissan of Quintarelli and Tsugio Matsuda, which was a lap down at the finish.

Ritomo Miyata and Yuji Kunimoto clinched the final point for 10th place in the best-placed of the Yokohama-shod cars, the Bandoh Toyota.

GT300: Kondo pair come from behind to win title 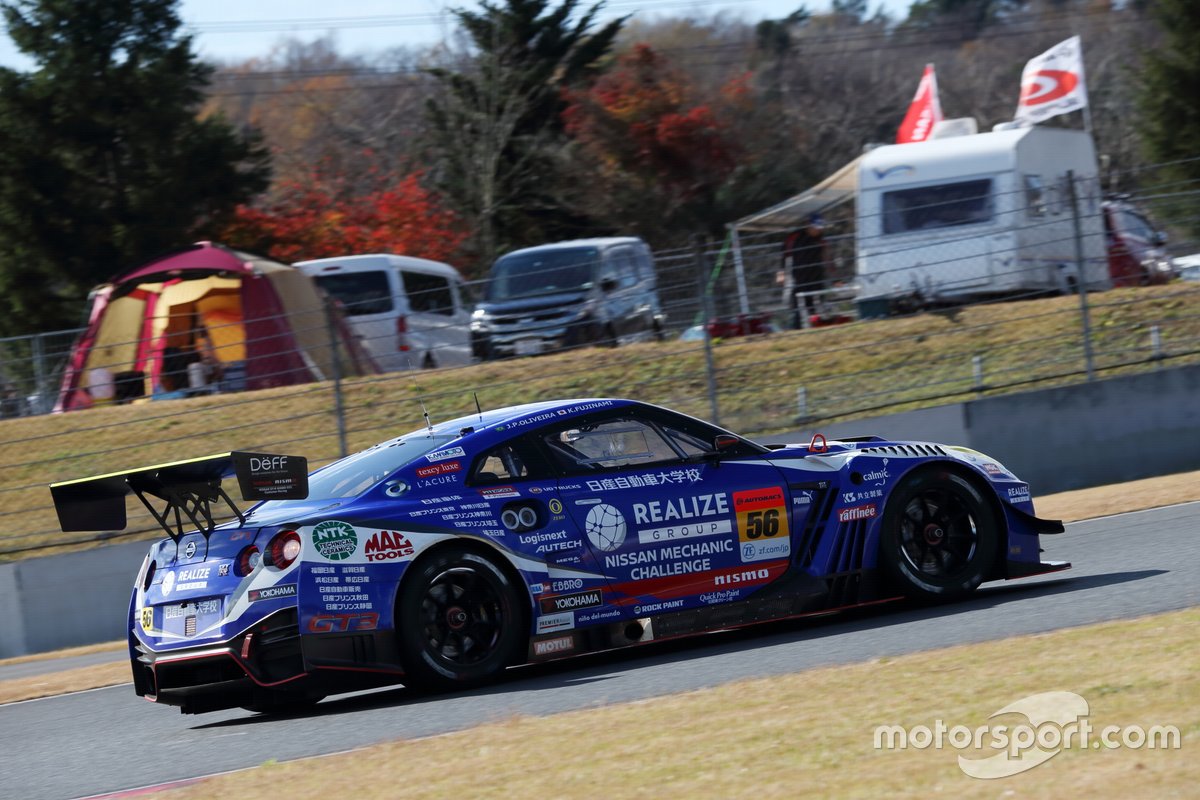 Kohta Kawaai and Hiroshi Yoshida put on a clinic in their JAF GT300-spec Supra, leading by as much as 34 seconds at one stage en route to a second win of the season to follow on from their triumph in the Fuji season opener.

Fujinami meanwhile made steady progress from seventh on the grid, moving up to fourth place before making his pitstop on lap 24 to hand over to de Oliveira.

The LEON Racing Mercedes-AMG GT3 of Naoya Gamou and Togo Suganami meanwhile vaulted from fifth to second by virtue of not changing tyres during their stop, which meant that de Oliveira needed to finish third to assure himself and Fujinami of the title.

By the time the pitstops had shaken out, de Oliveira was fourth and facing a 10-second deficit to the third-placed Inging Motorsports Toyota 86 MC of Kazuto Kotaka.

But the Brazilian made short work of the gap and made the crucial pass on lap 52, before closing on a struggling Gamou and moving up to second three laps later.

Kotaka then demoted the LEON Mercedes a further position before the finish to give Inging a second podium finish of the season, while the D'station Aston Martin Vantage GT3 of Tomonobu Fujii and Takuro Shinahara scored its best result of the year in fifth place.

Of the other title contenders, the works Subaru BRZ was only eighth at the finish despite leading the first eight laps in the hands of Hideki Yamauchi, while the ARTA Honda NSX GT3 that started from the back of the grid after an engine change was seventh.

Faring even worse were Gainer Nissan pair Katsuyuki Hiranaka and Hironobu Yasuda, who made an unscheduled second pitstop on their way to 18th.