Honda's Naoki Yamamoto has taken responsibility for what he concedes was a mistaken call for the Team Kunimitsu squad to start on soft tyres in Sunday's Suzuka SUPER GT race.

Yamamoto and his teammate aboard the #1 Honda NSX-GT, Tadasuke Makino, emerged from the fourth round of the season as Honda's top finisher in fourth, propelling Yamamoto to the head of the drivers' standings.

However, Yamamoto had qualified by far the lowest of the Honda drivers on Saturday in 11th, albeit carrying the stage one fuel flow restrictor, and come race day Makino struggled to make much headway in the opening stint before pitting to hand over to Yamamoto on lap 18 of 52.

But a switch to a harder compound of Bridgestone tyres for the second half of the race, in which forecast rain failed to materialise, paid dividends as Yamamoto was able to surge up the order and ensure the #1 crew finished 'best of the rest' behind an all-Nissan top three.

"Because of the unstable weather I thought it would be risky to start on the hard tyres, and despite the fact we knew the hard tyre was better, at my request we used the soft tyre for qualifying and the start of the race," reflected Yamamoto.

"I’m sorry to Makino for giving him a hard time in the opening stint. But, using the feedback from Makino, for the second stint I was able to confidently choose the hard tyre and breathe fresh life into our race.

"Although I wasn’t able to make it to the podium, we scored good points to round out the first half of the season, so I feel good."

Makino added: "Because the starting tyre was decided in qualifying, we had to start with a tyre spec we didn't really want to use and it became quite tough.

"Even so, looking ahead to the second stint I gave the team various information, and I did what I could while thinking about fuel consumption. The pace came back in the second half and finally we finished fourth. Considering the championship, I think it was a good result."

Yamamoto now leads the championship on 40 points, three ahead of Makino who is out of title contention by virtue of missing the opening race of the season at Okayama due to illness.

While Yamamoto and Makino recovered from a poor qualifying at Suzuka Real Racing pair Bertrand Baguette and Koudai Tsukakoshi failed to make the most of their P6 grid slot, ending up in seventh.

That followed a tough opening stint for Baguette, who lost places after an aggressive attack by NDDP/B-Max Nissan driver Katsumasa Chiyo, and a similarly uninspired run for Tsukakoshi, who was passed by Yamamoto.

"A very disappointing race considering the pace we had in qualifying and the race," Baguette told Motorsport.com. "It’s a long time since I felt like this after a SUPER GT race. Everything went wrong.

"My start was ok, but I suffered a divebomb attack from Chiyo at the chicane on the first lap and I lost three places. The safety car [deployed for Takuya Izawa's crash] killed us as well because we had a big gap to the car behind and the cars in front were starting to drop because they were mostly on soft tyres for the first stint and we were on the harder one.

"After 10 laps our car would have been much stronger but then the safety car came, and then not long after the safety car period it was time to pit, so there was nothing I could do really. 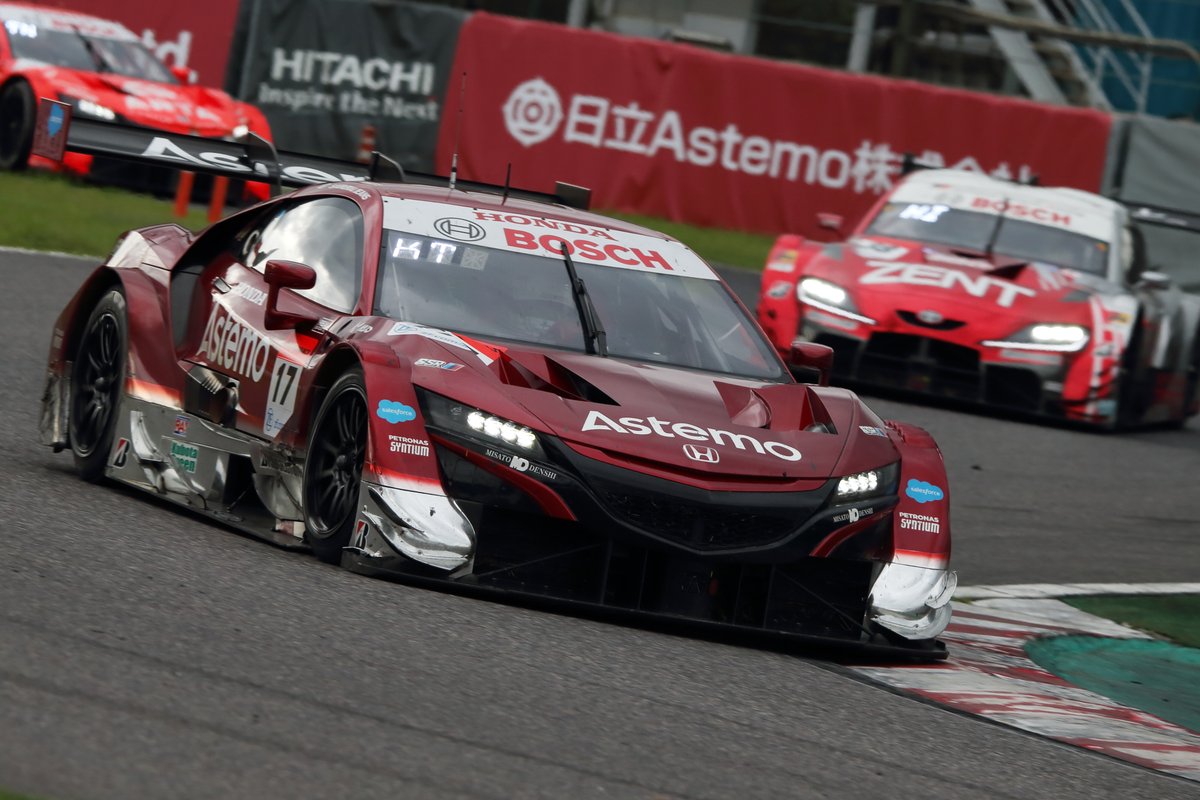 "On the second stint, we had unlucky timing with the traffic. We came out of the pits right in a pack of five or six cars, and Koudai could never find a way to pass even though he was faster.

"Yamamoto did a really impressive job in the traffic because their pace was the same as ours, not quicker than us, but he overtook all the traffic very quickly and then the Dunlop [Mugen] car as well. We couldn’t do that."

Baguette also suggested that leaving his pitstop until lap 20 was a mistake, as it allowed those that had come in earlier - including the Kunimitsu car of Yamamoto - to gain time with the undercut.

"[Stopping earlier] would have changed a lot because my in-lap was full of GT300 traffic and I think I lost about four seconds," he said. "It was a very slow in-lap and we should have stopped at least one lap earlier.

"That would have given us three or four seconds and then we’d have been out of this pack of cars and we would have been fine. I don’t think we could have beaten the Michelin cars, but P3 was maybe possible."