Honda needs to quickly find the cause of its crushing defeat to Toyota in last weekend's Okayama SUPER GT opener to prevent a similar result in the next round at Fuji Speedway, says Bertrand Baguette.

Real Racing pair Baguette and Koudai Tsukakoshi finished as the best of the Honda contingent at Okayama in fifth place behind an all-Toyota top four, having qualified down in ninth place.

Only a late pass for Tsukakoshi on the Cerumo Toyota for fifth prevented Toyota from repeating its 1-2-3-4-5 result from last year's season opener at Fuji Speedway.

Baguette, who drove the opening stint in the now-Astemo branded Real NSX-GT, said the team had to be satisfied with its position given its grid slot, but warned that a speedy reaction will be needed from the Honda engineers to work out how it was defeated so comprehensively.

"P5 was the target before the race, starting from P9," Baguette told Motorsport.com. "I think we did the maximum we could.

"There were some positives: the car was feeling good, the tyre was consistent, we beat one of the Bridgestone Toyotas [the Cerumo car]. But the TOM'S cars and Rookie Racing were too far ahead.

"Now we have to analyse what happened here, whether it was tyres, set-up, the fuel restrictor, the conditions. We need to find something, or it will be the same story at Fuji.

"I believe in the Honda engineers and I'm confident we can find a solution that can allow us to fight for a podium or a win, like we did last year in Round 2, but today there was nothing we could do. We got the best result we could, but not happy to be beaten by Toyota like this."

Baguette gained two positions in his stint, moving up from ninth to seventh before handing over to Tsukakoshi, but admitted that being passed by Ronnie Quintarelli's Nissan on the first lap stymied his progress.

He added that the straight line speed advantage of the Toyota GR Supra made overtaking almost impossible, with Tsukakoshi only finally clearing the Cerumo car of Hiroaki Ishiura on lap 68 of 82.

"I got overtaken by the Michelin car [Quintarelli] at the start, I got a bit stuck in traffic. Then I passed the Yokohama [Bandoh Toyota] and Dunlop cars [Mugen and Nakajima Hondas]. But I was behind the #38 [Cerumo Toyota] and the #23 car [Quintarelli] for a long time and I couldn't find a way to overtake them.

"It was the same for Koudai, it took him a long time to find an opportunity to overtake [the #38]. They are so quick in a straight line and that makes it very difficult to overtake them. Then he got stuck behind the #39 [SARD Toyota], they can defend their position so easily." 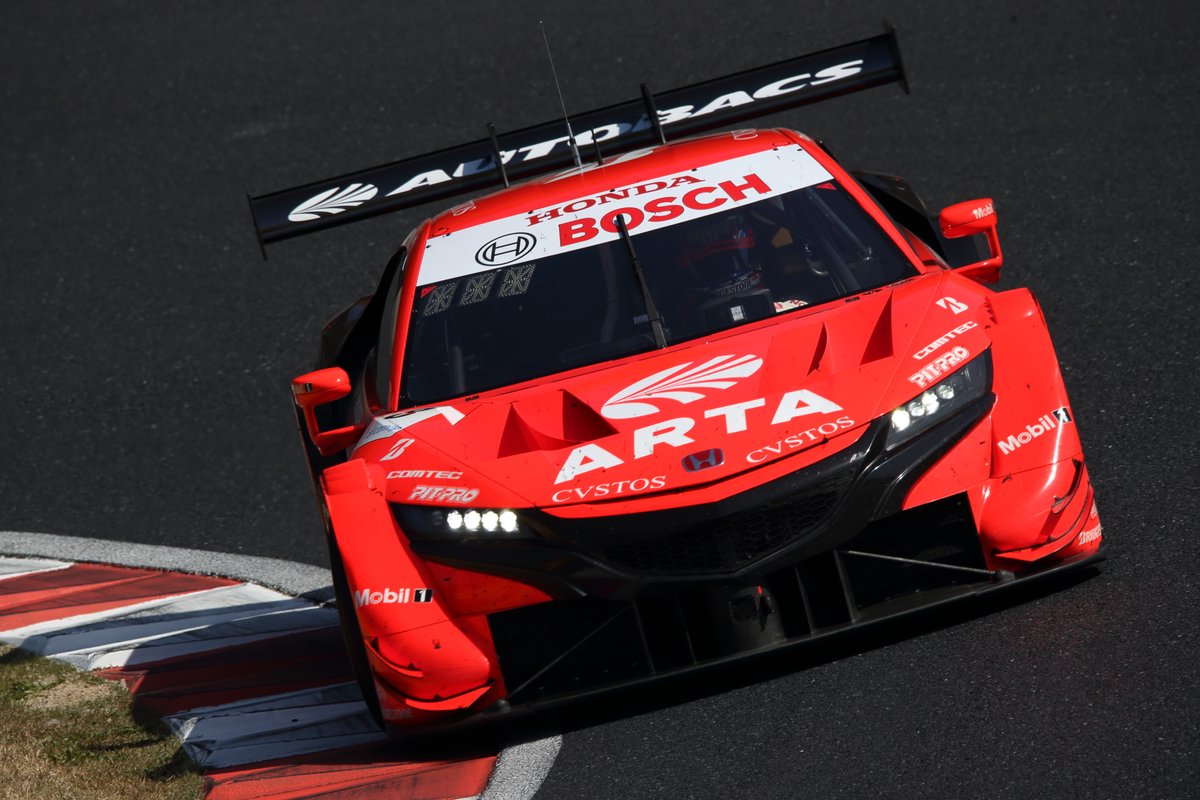 Honda SUPER GT project leader Masahiro Saiki said that while the NSX-GTs were constrained by qualifying poorly, there was nothing to suggest they could have matched the pace of the leading three Toyotas.

"All the Honda teams had a bad qualifying position, so we had to race in a group, and it was difficult for us to run at our own pace," said Saiki.

"But even if we had been able to break away from the pack, the pace of the top three cars was consistently fast, so I don't know if we would have been able to challenge them. The fact that we were unable to overtake the slower #39 [SARD Toyota] car is a concern.

"The race turned out to be a bit wild, and there was a safety car, but even in that situation, all the NSXs finished the race, and three of them were able to earn points, so we will continue to build on that in future races and try and join the championship battle."