Toyota stole the SUPER GT title away from Honda in a dramatic Fuji Speedway season finale as TOM'S pair Yuhi Sekiguchi and Sho Tsuboi won the race and Naoki Yamamoto was eliminated by a GT300 car.

Holding a five-point championship lead prior to the race, Yamamoto looked well on course for a third GT500 title in four years as he was running in fourth place aboard the #1 Kunimitsu Honda NSX-GT that had been started by his teammate Tadasuke Makino.

That was until the start of lap 51 of 66, when Yamamoto was effectively taken out by the ARTA Honda NSX GT3 of Ren Sato - giving the Stanley-liveried car considerable damage, forcing Yamamoto into the pits and ending his title hopes.

That meant Sekiguchi and Tsuboi, who had gone into the race 16 points down on Yamamoto with only 20 on offer for a win, were suddenly thrust into a title-winning position, with Tsuboi holding a comfortable lead over the sister #37 TOM'S machine of Ryo Hirakawa and Sacha Fenestraz.

Tsuboi reeled off the remaining laps to seal his first GT500 win, a first for the #36 side of the TOM'S garage and Sekiguchi since the 2019 Suzuka round and a first TOM'S title since 2017. It was also the team's fifth GT500 crown in total.

Hirakawa brought home the #37 car in second to make it a TOM'S one-two, while the pole-sitting Rookie Racing car of Kenta Yamashita and Kazuya Oshima completed a podium lockout for Toyota.

Poleman Oshima maintained the lead off the start, but immediately second-placed Makino came under pressure from the TOM'S GR Supras of Fenestraz and Sekiguchi.

On the opening lap, Sekiguchi climbed from fourth place to second, with Fenestraz slotting into third ahead of Makino on the second lap.

That was how the order up front remained until a safety car period was called on lap eight to recover the stricken Studie BMW M6 GT3, which had been involved in an accident with the #87 JLOC Lamborghini Huracan GT3.

When the race restarted on lap 13, Oshima was passed by both Sekiguchi and Fenestraz, with Sekiguchi leading until making his pitstop to hand over to Tsuboi at the end of lap 25.

Makino had already handed over the Kunimitsu Honda to Yamamoto on lap 22, and while the similarly early-stopping NDDP/B-Max Nissan briefly vaulted up the order by virtue of a fast stop, once Fenestraz had pitted to hand over to Hirakawa on lap 27, the top four was unchanged except for Yamashita vaulting ahead of Hirakawa for second (Hirakawa would repass late in the race).

Yamamoto was therefore on course to beat Sekiguchi and Tsuboi to the title by four points, albeit coming under increasing pressure from the fifth-placed Cerumo Toyota of Hiroaki Ishiura.

That was until the reigning champion was left with nowhere to go when the out-of-control ARTA GT300 car came piling up the inside at Turn 1, rookie Sato seemingly caught out in the heat of the moment in battle against the GT300 points-leading Subaru BRZ.

Yamamoto was able to negotiate the rest of the lap at reduced pace and bring the car back into the pits, but spent some 11 minutes in the box while the stricken #1 machine was repaired. He eventually returned to the track and was able to take the finish some seven laps down.

As well as denying Honda and Kunimitsu the title, the incident also cleared the way for a Toyota lockout of the top five, with the SARD car of Yuichi Nakayama and Heikki Kovalainen claiming fourth ahead of the Cerumo car of Ishiura and Yuji Tachikawa.

The ARTA Honda of Tomoki Nojiri and Nirei Fukuzumi, Yamamoto's nearest rivals pre-race, had its challenge undone by a slow pitstop that dropped the car from fifth in the first stint to 10th.

Nojiri was able to battle his way back up the order, climbing as high as fifth after Yamamoto's accident, but was eventually repassed by the SARD Toyota of Nakayama and finished sixth.

In the final race for the current-generation Nissan GT-R, NISMO pair Tsugio Matsuda and Ronnie Quintarelli finished seventh after a spirited battle against NDDP/B-Max pair Kohei Hirate and Katsumasa Chiyo, with the Impul Nissan of Nobuharu Matsushita and Kazuki Hiramine finishing ninth.

It was an eventful opening couple of laps for the Impul car as Matsushita tipped the Mugen Honda of Ukyo Sasahara into a spin at Turn 1 shortly after the start, earning a drive-through penalty, before becoming involved in a three-car melee that ended the hopes of the Real Racing Honda squad.

Bertrand Baguette had started the Real NSX-GT he shares with Koudai Tsukakoshi down in 10th, but had lost places at the start and was trying to make up the lost ground, going for an aggressive move up the inside of Matsushita going into the final corner on lap three.

But it backfired as the Honda came off worst in the resulting impact - Baguette tried to solider on for another lap despite severe damage before finally pitting and retiring the car - which also ended up pitching the blameless Racing Project Bandoh Toyota of Yuji Kunimoto into a spin.

There was further drama later on for the Bandoh machine, which lost a major piece of rear bodywork along the main straight, prompting a late full-course yellow period. Ritomo Miyata was shown the black-and-orange flag, forcing him to pit for a second time en route to a distant 13th place. 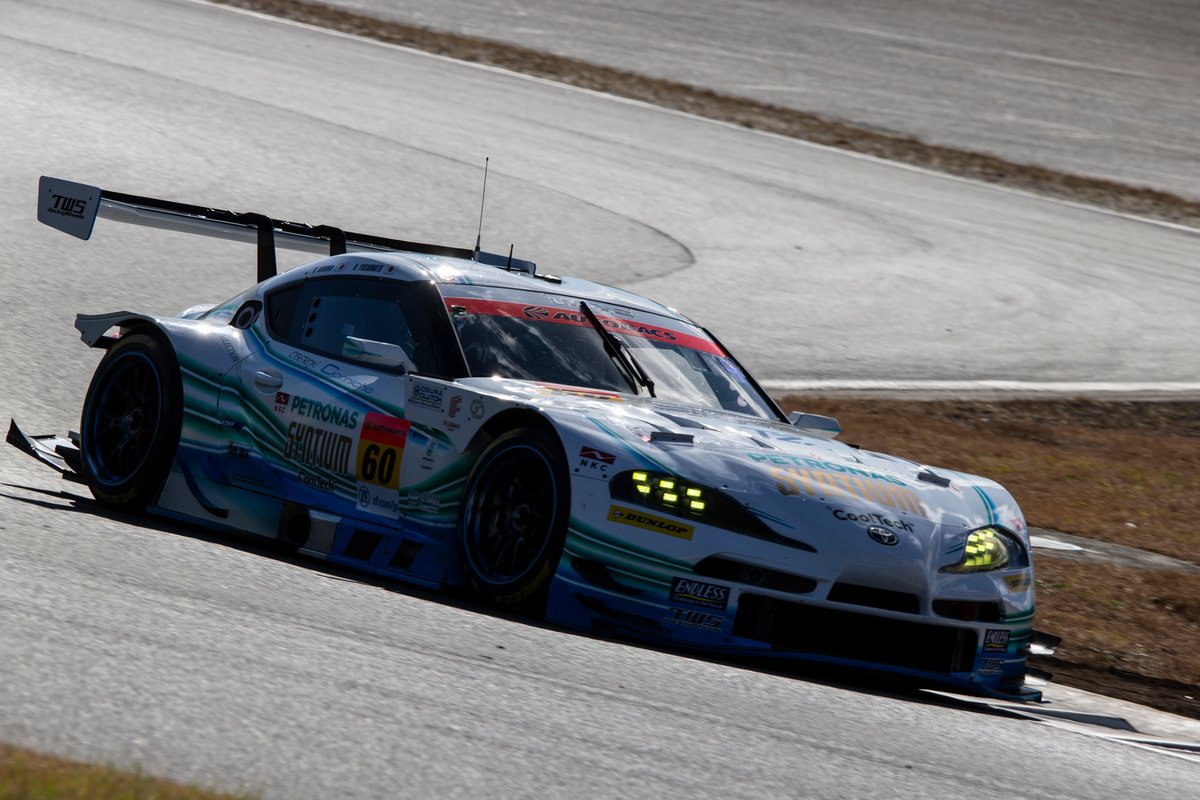 Starting from pole and with its nearest championship rivals starting far down the order, Iguchi and Yamauchi merely needed a drama-free race to give the new-for-2021 BRZ a title in its first year of service, and that's exactly what they got as drama befell several other frontrunners.

Kawaai stopped relatively early on lap 19, giving teammate Hiroki Yoshida a long run to the flag, but Yoshida was well clear at the front once the pitstop phase had finished until suffering a costly rear-left puncture at the end of lap 51.

That handed the advantage to the LM Corsa car of Kohno and Yoshimoto, who repeated their win from earlier in the season at Fuji, while LEON Racing Mercedes pair Naoya Gamou and Togo Suganami were promoted to second for their best finish since the opening race of the season.

The Subaru was the biggest loser of the pitstop phase, slipping to sixth, but after the Saitama Toyopet team's misfortune, a puncture for the #88 JLOC Lamborghini promoted Yamauchi to fourth. He was then able to pass the Goodsmile Racing Mercedes to take the final spot on the podium.

Outgoing champions Joao Paulo de Oliveira and Kiyoto Fujinami battled their way up from 17th on the grid to finish fifth in the Kondo Racing Nissan GT-R GT3, ahead of the late-stopping Hoppy Porsche 911 GT3 R that will be replaced next season by a self-built version of the Supra.

Kazuki Hoshino brought his SUPER GT career to a close in 10th place in the Gainer Nissan he shares with Keishi Ishikawa, one place behind the delayed Saitama Toyopet machine of Kawaai and Yoshida.