From fifth on the grid, ex-Formula 1 racer Kovalainen concluded his stint third behind the ARTA Honda and the Kondo Nissan that spent the first part of the race fighting for the lead.

The Finn brought in the #39 Toyota GR Supra on the same lap as poleman Nirei Fukuzumi in the #8 ARTA Honda NSX-GT, lap 26 of 66, with Mitsunori Takaboshi having already pitted the #24 Kondo Nissan GT-R from second the lap before.

Swift pitwork allowed the SARD crew to jump the Kondo car for second, and then after taking over from Kovalainen, Nakayama was up to speed much faster than Tomoki Nojiri in the ARTA car, and passed for the net lead before the out lap was complete.

From there, Nakayama was tasked with nursing a five-second lead to the end of the race, and he finally came home with an advantage of 10.216s to score his and Kovalainen's second win as a pairing following their victory at Autopolis last year. 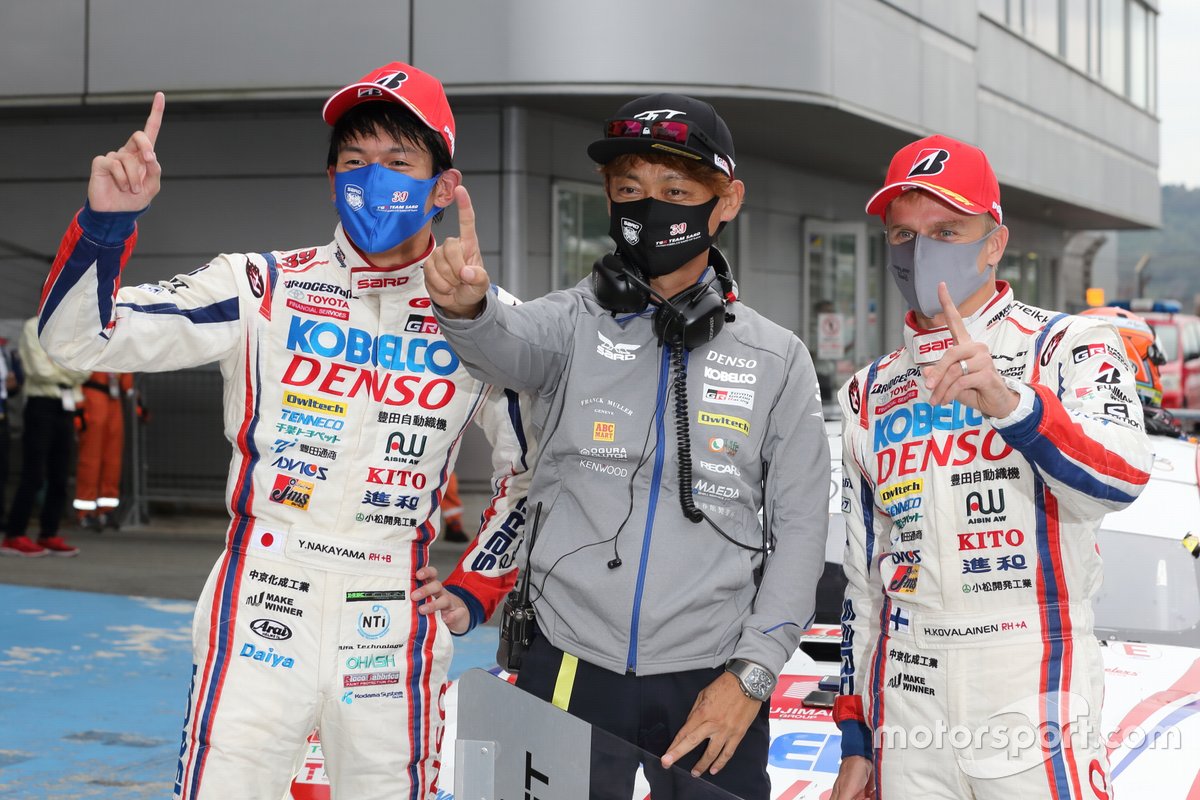 As Nojiri dropped further places, the #37 TOM'S Toyota, in which Nick Cassidy made progress from 11th on the grid, took over as the SARD crew's main challenger.

Ryo Hirakawa managed to get within three seconds of Nakayama at one stage but then started to lose ground, and a recovering Nojiri was able to close back in. But both Hirakawa and Nojiri found themselves powerless to repel Tsuboi in the #14 Cerumo Toyota.

The #14 car had spent the first stint in the lower reaches of the top 10 in the hands of Kazuya Oshima but was up to sixth after the stops - which became fifth when Jann Mardenborough stopped on-track in the Kondo Nissan with a gear selection problem.

Having already picked off Naoki Yamamoto in the Kunimitsu Honda for fourth, Tsuboi lunged up the inside of Nojiri at Turn 10 to take third on lap 52, and then several corners later he passed Hirakawa along the start/finish straight to take second.

Nojiri was able to follow Tsuboi through on Hirakawa to salvage a first podium of a troubled season for ARTA in third place.

Second for Tsuboi and Oshima means they take the lead of the standings on 47 points, a single point clear of Hirakawa and Cassidy, who held on for fourth after Hirakawa came out on top in a late battle with Yamamoto in the Kunimitsu Honda. 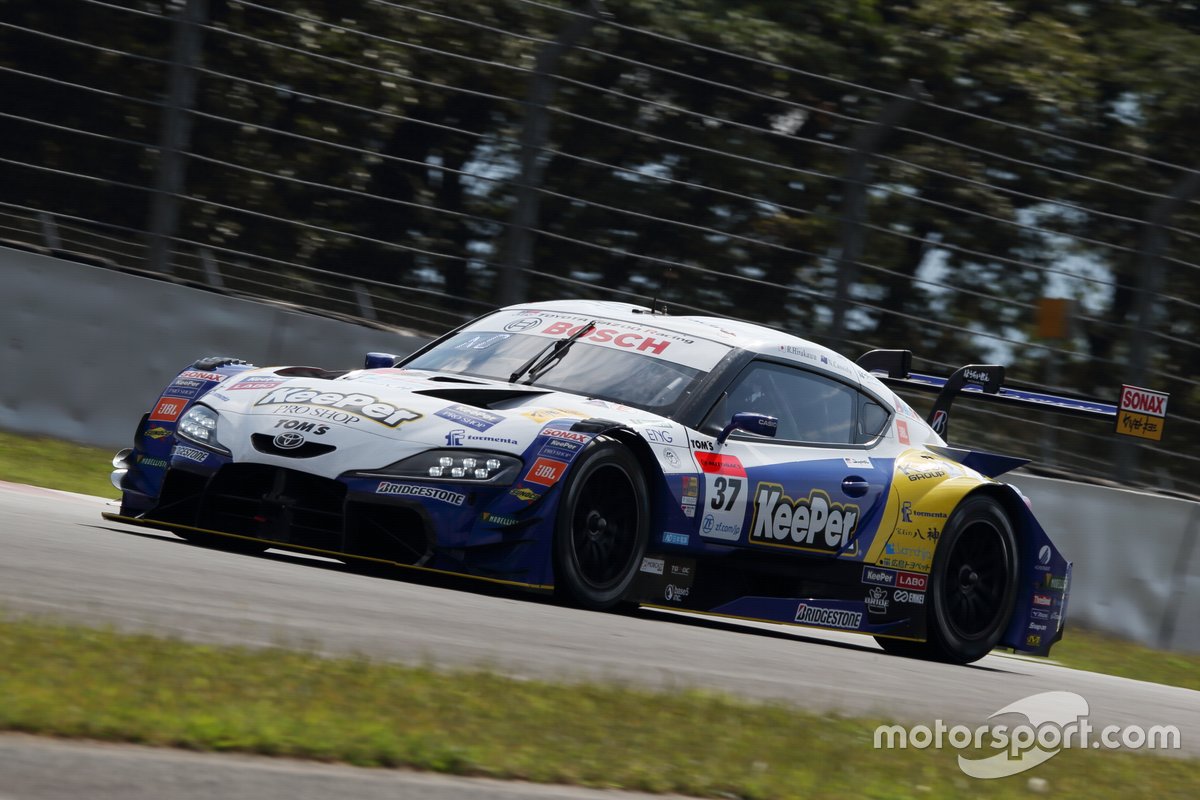 Mugen Honda pair Ukyo Sasahara and Hideki Mutoh recovered from being punted into a spin at the first corner by the NDDP/B-Max Nissan of Katsumasa Chiyo to score sixth.

The #3 Nissan was forced to park up with terminal damage after that incident which brought out the safety car and set up the Yokohama marque for further misfortune.

Daiki Sasaki had started on the front row in the #12 Impul car, but lost places after running wide at Turn 1 and then picked up a drive-through penalty for passing the Bandoh Toyota once the safety car boards had been displayed.

Impul pair Sasaki and Kazuki Hiramine recovered to eighth place behind the Bandoh car of Ritomo Miyata and Yuji Kunimoto, which slipped down the order early on after starting third.

They were the only Nissan drivers to score points, as NISMO pair Ronnie Quintarelli and Tsugio Matsuda made a second stop due to a steering problem and finished 11th.

Completing the scorers were the #38 Cerumo Toyota of Hiroaki Ishiura and Yuji Tachikawa in ninth and the #17 Real Racing Honda of pre-race points leaders Bertrand Baguette and Koudai Tsukakoshi, who struggled with the stage three fuel flow restrictor.

Baguette and Tsukakoshi slip to third in the standings, but still within three points of the lead.

A late puncture consigned the #36 TOM'S car of Yuhi Sekiguchi and Sacha Fenestraz to a lowly 12th, although Sekiguchi was running 10th at the time amid a difficult second stint.

Joao Paulo de Oliveira and Kiyoto Fujinami helped make up for Kondo Racing’s disappointment in GT500 by taking a dominant win in the GT300 class. 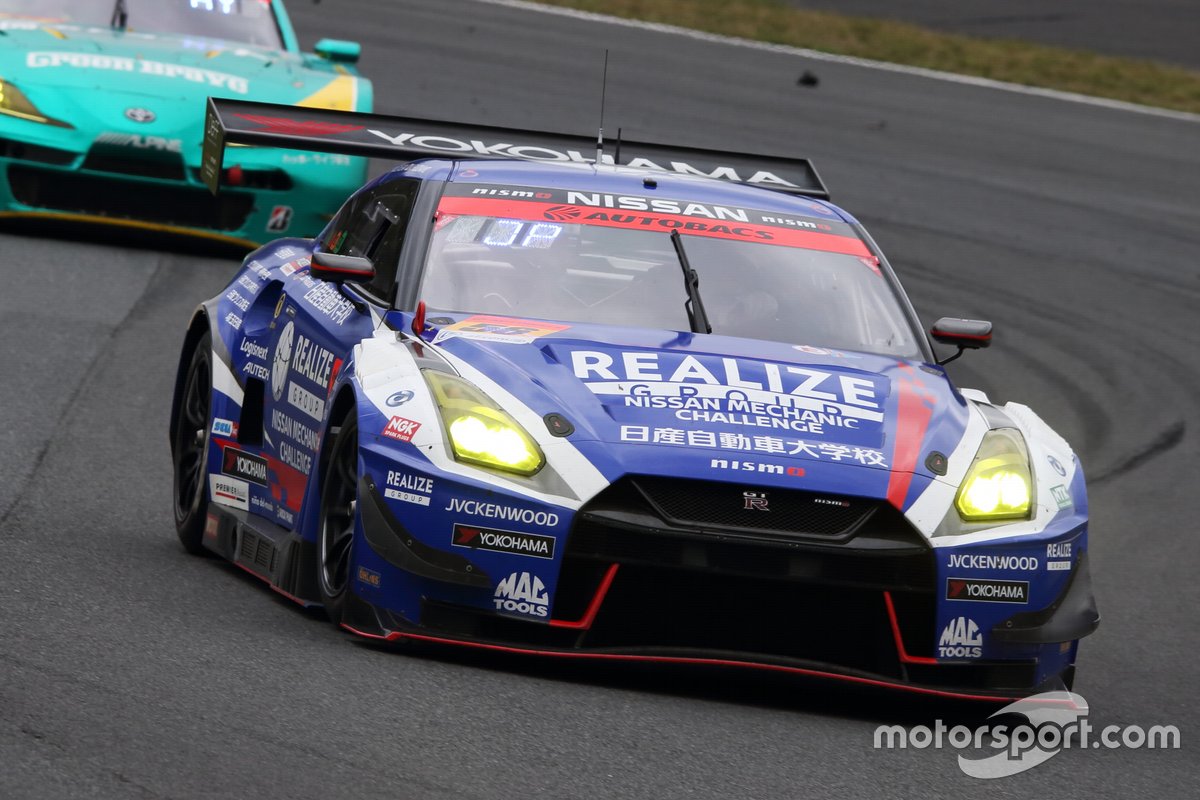 Fujinami moved up from sixth on the grid to lead in the opening stint in the #56 Nissan GT-R NISMO GT3, but fell behind the Saitama Toyopet Toyota GR Supra GT300 of Kohta Kawaai and Hiroki Yoshida which gained time in the pits courtesy of not changing tyres.

De Oliveira was then tasked with overturning a 12s deficit to Yoshida in his stint, but the Brazilian was much faster on his fresh rubber and made the pass on lap 50 of 62 before pulling away to the tune of 23 seconds – securing his first GT300 win in the process.

Yoshida was then forced to turn his attentions to holding off the LEON Racing Mercedes-AMG GT3 of Naoya Gamou in the latter stages, but both were passed by Toshiki Oyu in the ARTA Honda NSX GT3, which had started down in 11th.

The pole-winning Inging Motorsports Toyota 86 MC of Kazuto Kotaka and Ryohei Sakaguchi slipped to seventh place despite Sakaguchi leading the opening portion of the race.

The LEON Mercedes of Gamou and Togo Sugnami now leads the standings on 50 points, nine clear of the #11 Gainer Nissan of Katsuyuki Hiranaka and Hironobu Yasuda - who led the points prior to the race but could do no better than 10th this time.

With the works Subaru BRZ, the only other car carrying the maximum 100kg weight handicap, coming home 16th, de Oliveira and Fujinami move up to third in the standings, 14 points off the lead with three rounds still to go.