Fenestraz and Miyata enjoyed a relatively straightforward run to victory in the 99-lap contest aboard their #37 KeePer-sponsored GR Supra, winning by 7.5 seconds over the #12 Impul Nissan Z of Bertrand Baguette and Kazuki Hiramine.

It vaults the TOM's duo into the lead of the championship by a single point at the halfway mark of the season.

The race had been controlled for the majority of the distance by the #24 Kondo Racing Nissan of Kohei Hirate and Daiki Sasaki that started second, as Hirate blasted ahead of the pole-winning #19 Racing Project Bandoh Toyota of Yuji Kunimoto as early as the third lap.

While Kunimoto started falling back rapidly in the next few laps, Hirate was able to hold steady at the head of the field, managing a slim lead hovering around the two-second mark over Fenestraz's TOM'S car.

The status quo was maintained after the first round of pitstops, as Hirate pitted on lap 37 to hand over to Sasaki, and Fenestraz made way for Miyata on the previous tour. But it was a different story at the second round of stops.

Sasaki came in to hand back to Hirate on lap 72, but Miyata stayed aboard the #37 car when he made his stop next time by and was able to gain a hefty overcut over the Kondo Nissan.

Hiramine, who took over from Baguette at the first stop, looked like he could be in a position to overcut as he came in next time by, but a lock-up headed into Turn 1 scuppered any chance of threatening Miyata.

The order at the front remained static to the end, with the #37 TOM'S machine taking its first win since the 2020 season-opener at Fuji. 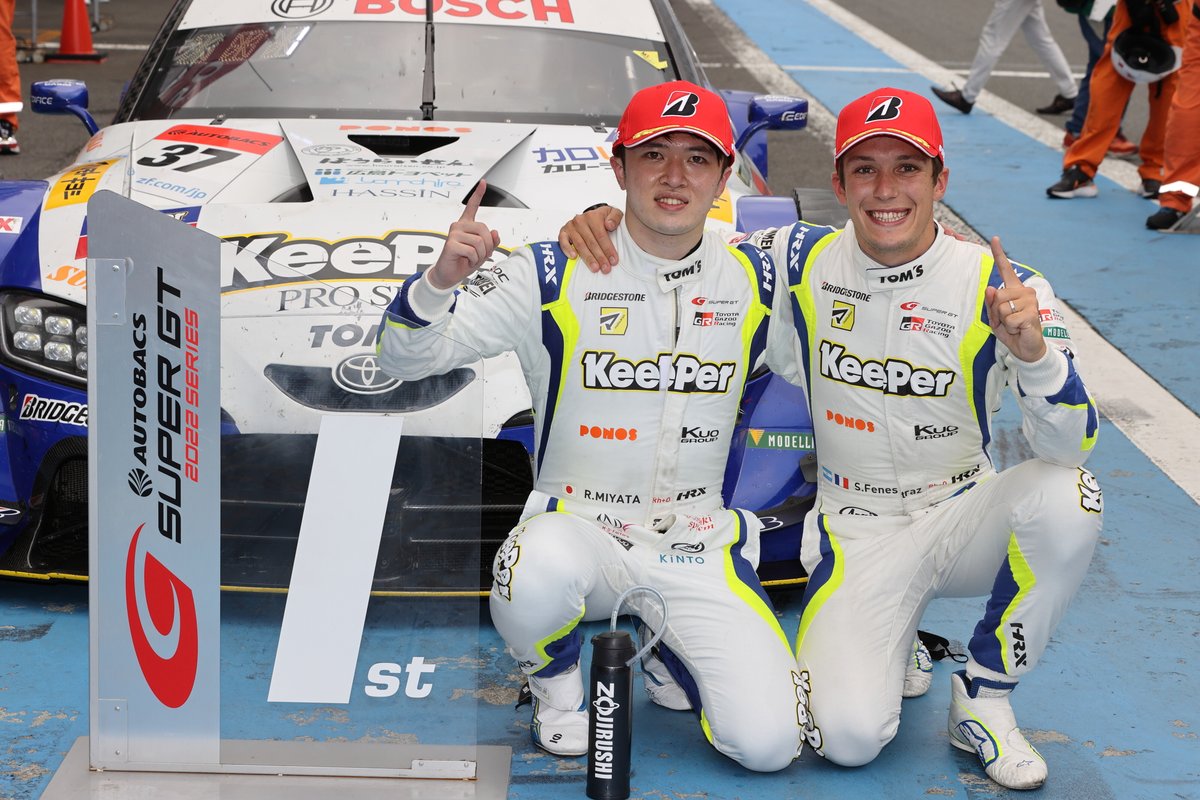 Nissan made it two cars on the podium for the first time this season, with both the Impul and Kondo crews taking their best results to date with their current line-ups.

Fourth, but never truly part of the lead fight, was the #36 TOM'S car of Giuliano Alesi and Sho Tsuboi.

GT500 rookie Alesi struggled early on before handing over to Tsuboi on the minimum cut-off of lap 33, but Tsuboi couldn't make much of an impression on the leading trio during his double-stint once clear of the #8 ARTA Honda of Nirei Fukuzumi and Tomoki Nojiri.

ARTA was the strongest finisher for Honda on a day to forget for the Sakura marque, whose other two Bridgestone-shod NSX-GTs finished 8th (Team Kunimitsu) and 10th (Real Racing) respectively.

The two cars that led the points heading to Fuji had contrasting fortunes, as Rookie Racing Toyota pair Kenta Yamashita and Kazuya Oshima only narrowly lost out to the SARD GR Supra of Yuhi Sekiguchi and Yuichi Nakayama - keeping them within a point of the championship lead.

Nissan's #3 NDDP Racing car on the other hand struggled, with its Michelin tyres appearing not to suit the unexpectedly cool conditions, leaving Katsumasa Chiyo and Mitsunori Takaboshi a lapped 12th.

The other works-NISMO run Z, the #23 car, was 10 laps down at the flag as Tsugio Matsuda slowed on track not long after taking over from Ronnie Quintarelli, coming in for a brief spell in the garage before heading back out.

Cerumo's Toyota was the only non-finisher as it was struck by an early throttle issue.

Subaru scored its first victory of the season in a GT300 battle that featured endless twists and turns.

Hideki Yamauchi, who shares the #61 R&D Sport BRZ with Takuto Iguchi, had to work had to pass the Gainer Nissan GT-R NISMO GT3 of Hironobu Yasuda in the closing stages after a number of fancied runners dropped out. 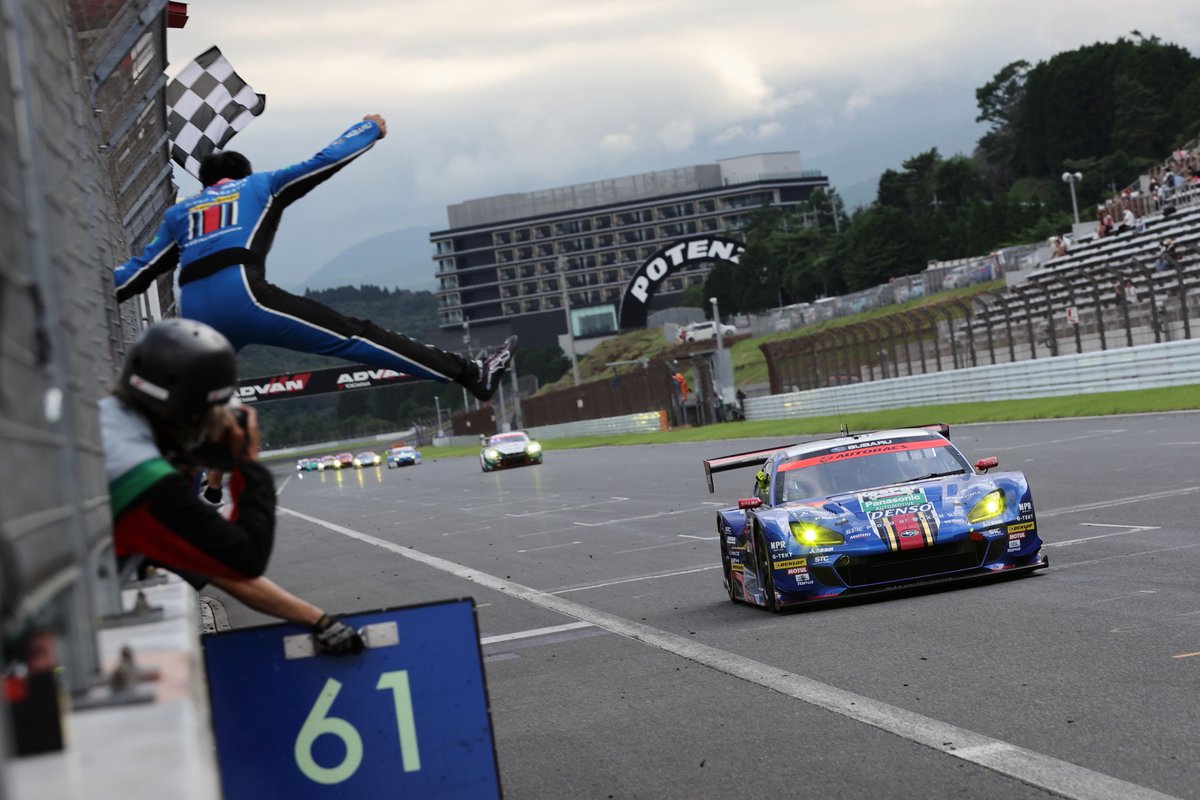 Chief among these was the pole-sitting LEON Mercedes-AMG GT3 that started on pole and had built up an early 10-second lead only for its hopes to evaporate when Naoya Gamou locked up his front-right wheel on his way into the pits, leaving his mechanics powerless to remove the offending wheel.

That handed a handsome advantage to the Goodsmile Racing of Nobuteru Taniguchi and Tatsuya Kataoka, who were controlling the race in the final stint when Kataoka suffered a sudden left-front puncture.

With the #10 Gainer Nissan having already dropped out of the lead fight with mechanical dramas of its own, that left the team's #11 machine of Yasuda and Keishi Ishikawa out front in the closing stages.

But Yasuda had to reckon with the Subaru of Yamauchi, who despite having a major straight-line speed disadvantage against the Nissan was able to force his way by after a back-and-forth battle that saw the lead exchange hands several times.

Once passed on lap 85, Yasuda had to concede and come home second, ending up almost six seconds down at the flag and just over five seconds clear of the Team UpGarage Honda NSX GT3 Evo2 of Takashi Kobayashi and Kakunoshin Ota in third.

A typically strong performance from the success ballast-laden #56 Kondo Racing Nissan of Joao Paulo de Oliveira and Kiyoto Fujinami, who finished sixth, keeps them at the head of the championship table on 39 points, with Subaru duo Iguchi and Yamauchi vaulting up to second on 29.5.