ARTA Honda was declared the winner of SUPER GT’s Fuji 450km Golden Week race that was overshadowed by a terrifying crash for Nissan driver Mitsunori Takaboshi.

Running in second place behind the race leading SARD Toyota of Yuhi Sekiguchi, Takaboshi suffered a huge incident on the start/finish straight on lap 59 of 100 while trying to avoid the slow Arnage Toyota 86 MC of Takeshi Suehiro.

Takaboshi was able to extricate himself from the car and escaped major injury after initial scans, but the damage to the barriers was such that the race had to be halted for a prolonged period of time.

A decision was made to restart the race at 6:10pm local time, but all subsequent laps took place behind the safety car, with Nirei Fukuzumi and Tomoki Nojiri claiming the win in a bizarre ending that saw the two-leading Toyotas being hit with penalties for unrelated incidents.

Sekiguchi was found to have inspected the tyre of the SARD Toyota during the red flag in a breach of regulations, while the #37 TOM’S crew was hit with a penalty for causing a collision with the team’s sister GR Supra.

The two Yokohama-shod cars that locked out of the front row of the grid quickly dropped down the order on the opening lap of the race, allowing Sacha Fenestraz to take an early lead in the #37 TOM’S Toyota GR Supra.

Sho Tsuboi made it a one-two for the TOM’S team on the second lap after an incredible charge from eighth on the grid, making a brilliant pass on the #3 NISMO Nissan Z of Katsumasa Chiyo around the outside of Coca-Cola corner.

Fenestraz and Tsuboi then engaged in a long intra-TOM'S battle for supremacy, with Chiyo also joining the duo to turn it into a three-way fight for victory.

Tsuboi came close to making a pass on Fenestraz at the start of lap 18 but it wasn’t until six laps later where he could make the move stick, diving down the inside of the French driver into Turn 13 to snatch the top spot.

The order at the front remained the same until the race was red-flagged for the first time on lap 49 after Hisashi Wada shunted his Mercedes-AMG GT3 heavily at the exit of Turn 13, losing the entire driver’s side door in the incident.

The race-leading #36 TOM’S Supra of Giuliano Alesi, who had taken over the car from Tsuboi, was running behind Wada as he approached the corner, but it appears there was no contact and Wada simply lost control of his Mercedes after running over the kerb.

A full-course yellow was initially deployed, followed by the full safety car, before race control decided to red-flag the race to allow marshals to repair the barriers.

The SARD Toyota was the biggest beneficiary from the intervention, with Yuichi Nakayama peeling into the pits just before the FCY was deployed to hand over the car to teammate Sekiguchi.

This allowed Sekiguchi to emerge from the pits in third place, behind the race-leading TOM’S Toyotas of Alesi and Fenestraz’s teammate Ritomo Miyata just before the red flag was shown on lap 49.

When the race resumed with a rolling start after a long halt, the two TOM’S cars came to blows at Turn 1, with race leader Alesi pushed wide by his stablemate Miyata.

This allowed Sekiguchi to grab the lead of the race from the #3 Nissan of Takaboshi, with Miyata and Alesi dropping to third and fifth respectively, either side of the ARTA Honda, because of their incident.

However, Sekiguchi wasn’t able to break away from the pack, with Takaboshi and Miyata running right on his tail when the trio exited the final corner for the start of lap 59.

While Sekiguchi was able to spot the slow-moving Toyota GT300 car of Suehiro that was running right next to the pit wall, Takaboshi had to make a list-ditch swerve to the left to avoid rear-ending into his car.

However, this caused Takaboshi to lose control of his Nissan and he smashed the barriers on the other side of the track at high-speed, suffering multiple spins due to the forces involved in the impact.

The race was red-flagged immediately, with several vehicles arriving to the track to attend to the Japanese driver.

Takaboshi was fortunately able to get out of his wrecked car unaided and was taken away in an ambulance, with initial checks revealing he suffered no fractures. He was later taken to the hospital as a precaution.

The damage to the repairs was so significant that the race couldn’t be resumed until 6:10pm local time, paving the way for a 10-minute dash for victory.

However, partly due to Mach Toyota failing to get away at the restart, all subsequent laps took place behind the safety car in a bizarre finish to the race.

Sekiguchi took the chequered flag first on the road but was demoted to the back of the pack for touching the front-right wheel of his Toyota during the second red-flag period.

The #37 Toyota of Miyata also received a penalty for his earlier incident with TOM’S stablemate Alesi, likewise dropping down the order.

All of this handed an unlikely win to the ARTA Honda of Nojiri and Fukuzumi, the duo claiming their first GT500 win since the penultimate round of the 2021 season at Motegi.

Alesi and teammate Tsuboi were eventually classified second in the #36 TOM’S Toyota, while Kazuki Hiramine and Bertrand Baguette rounded out the podium spots in the Impul Nissan.

Fourth-place went to Tsugio Matsuda and Ronnie Quintarelli in the #23 NISMO Nissan, ahead of Kunimitsu Honda duo Naoki Yamamoto and Tadasuke Makino.

The Bandoh Toyota car of Yuji Kunimoto and Sena Sakaguchi that started on pole eventually finished sixth, while the Okayama-winning Rookie Racing Toyota of Kenta Yamashita and Kazuya Oshima was classified seventh despite the two picking up heavy damage to the rear of the car.

With only half-points awarded, Yamashita and Oshima maintain the lead of the championship on 23 points, five clear of Yamamoto and Makino.

There was some consolation for Nissan in the GT300 class as Riki Okusa and Ryuichiro Tomita took top honours in the #10 Gainer GT-R NISMO GT3. 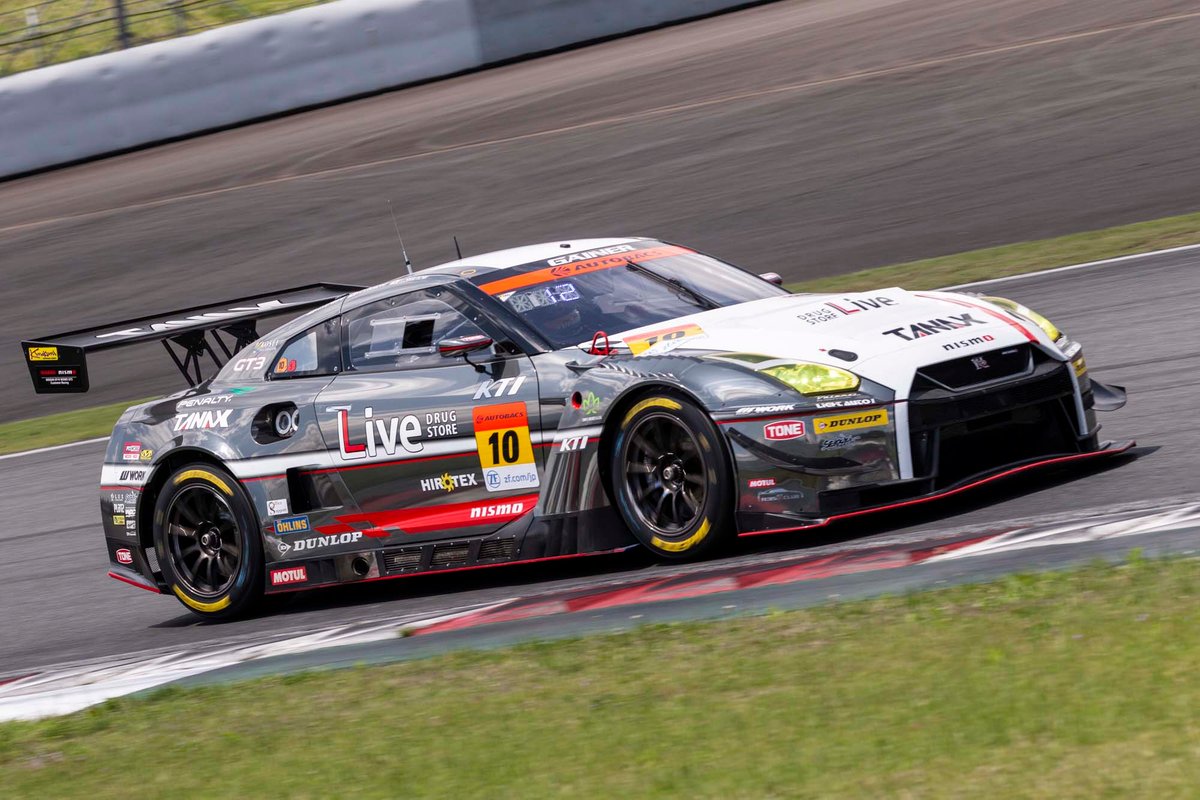 Tomita took the lead from the pole-sitting #61 Subaru BRZ of Hideki Yamauchi at the start of the race and never looked back, handing the car to Okusa with a comfortable margin up front.

Subaru pitted later than most of its rivals and although it saved time by not completing a driver change, it still slipped behind the #34 Drago Corse Nissan of Yuji Ide and Masataka Yanagida in third.

The #11 Gainer Nissan crew of Hironobu Yasuda and Keishi Ishikawa made it three Nissans in the top four, with Takashi Kogure and Yuya Motojima completing the top five in the #88 JLOC Lamborghini Huracan GT3 Evo.

Kiyoto Fujinami spun the Kondo Racing Nissan on the start/finish straight when he stamped on the brakes after the FCY was deployed for the first time in the race, later picking up a drive-through penalty for the incident.

However, he and teammate Joao Paulo de Oliveira were fortunate to still finish seventh and bag some points in a car hobbled by 60kg of ballast following their victory in Okayama last month.