The Honda Zytek ERS scored its first victory this weekend, following a dominant performance at Sepang, Malaysia. The race, third round of the Super GT championship fell to the ARTA-entered Honda CR-Z GT Hybrid with the identical car of the Mugen team in second place, the pair well ahead of the rest of the field. 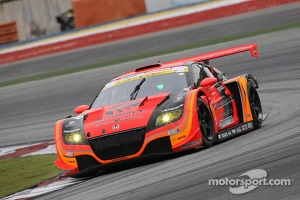 This is the first full season for the 50-kilowatt system, which has been developed for, and with, Honda by UK Midlands-based Zytek. A full-hybrid system, it operates a near 100 per cent duty cycle throughout a whole lap.

It is just one member of the Zytek family of energy recovery systems, as well as the first of a number of on-going projects between Zytek and Honda that are concerned with ERS and other areas. The two Honda CR-Z GT Hybrids, which compete in the GT300 category at Sepang were the fastest in class during qualifying, pulling away from their competitors in the race, despite the fact that the Mugen car was carrying 38 kilos of ‘success’ ballast.

After 52 laps, the 55 car of Shinichi Takagi and Takashi Kobayashi finished just over two seconds ahead of the 16 car driven by former IndyCar driver Hideki Mutoh and Yuhki Nakayama. The others were left trailing, 21 seconds and more in their wake.

Programme manager, Pete May states ‘we are pleased that the Honda Zytek ERS has achieved its first victory in the GT300 class at the Sepang GP. It’s an achievement of which we are very proud.’

A. Caldarelli settles to 10th by misfortune in the last lap, A. Couto finishes in 15th place