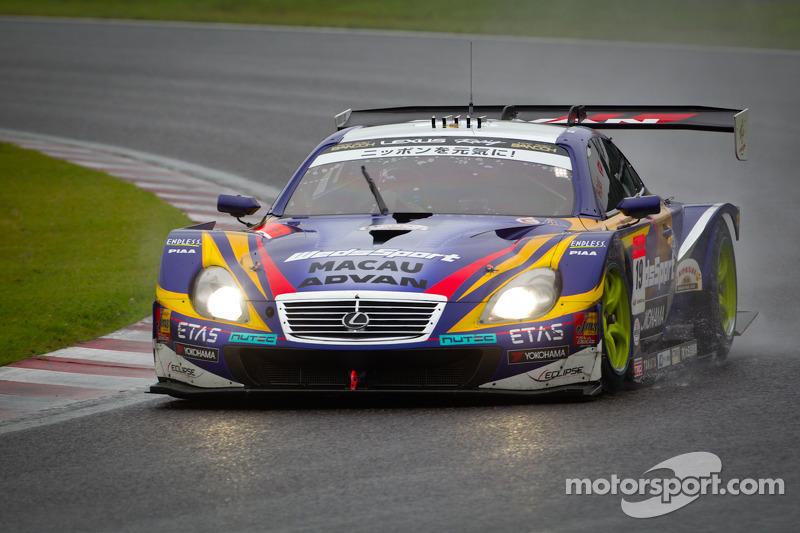 Outrunning the GT-R by just one thousandth of a second!

On Sept. 29, the qualifying for the SUPER GT IN KYUSHU 300KM, Round 7 of the 2012 AUTOBACS SUPER GT, was held at the AUTOPOLIS (lap = 4.674 km) in Oita Pref. In this qualifying, the WedsSport ADVAN SC43 driven by Seiji Ara and Andre Couto won the team’s first GT500 class pole position ever. With this, the WedsSport ADVAN SC43 will start from the front row in the race on Sept. 30.

The qualifying this time was run in a “knock-out” format. In this system the qualifying is run in three sessions (Q1, Q2, Q3). In the first two of these sessions the teams unable to qualify above the cut-off point are “knocked out” of the competition and not able to move on to the next session, at which point their place in the qualifying order is decided and the remaining teams compete for grid order based on their time trial performances.

Although it was feared that Typhoon No. 17 would strike the Autopolis Circuit in the Aso mountain region of Oita prefecture with serious effects, there was never enough rain to cause the competition to be stopped. But it did rain on and off, causing the wet track conditions to change constantly and making for a difficult qualifying with numerous incidents of cars running off the track, spinning out or crashing.

In the morning, the rain fell hard for a while, but when the SUPER GT qualifying began at 2:00 in the afternoon it was down to a light drizzle. In Q1 it was the Nissan GT-R teams that ran strongest, with the fastest time going to last Year’s Autopolis winners, the S Road REITO MOLA GT-R driven by Ronnie Quintarelli. But, the KEIHIN HSV-010 (Koudai Tsukakoshi) and WedsSport ADVAN SC430 (Andre Couto) followed, putting Honda and Lexus machines also in the top three and ensuring tight competition through Q3.   With plenty of rainwater still on the track in Q1, there were a number of incidents of cars running off the track or crashing, and there was also one crash early in Q2. The session had to be stopped while this car was cleared from the course, and during the delay the rain grew stronger. Amid this confusion in Q2, the MOTUL AUTECH GT-R (Michael Krumm) recorded the fastest time. This was followed by another GT-R, the D'station ADVAN GT-R (Bjorn Wirdheim), but also by the KEIHIN HSV-010 (Toshihiro Kaneishi) and the WedsSport ADVAN SC430 (Seiji Ara), showing that all three machines were performing well in the rain.

Almost no rain fell during the final Q3 and the track condition improved considerably. It was the WedsSport ADVAN SC430 (Andre Couto) that proved to have the best combination of machine, tire and driver performance in these “slightly wet” conditions. Couto recorded the fastest time of the day with a 1’46.534. Last year’s Autopolis pole position winning MOTUL AUTECH GT-R (Satoshi Motoyama) tried to beat this time, while struggling to control the slipping machine. Eventually, Motoyama fell just one-thousandth of a second short of the WedsSport ADVAN SC430’s time. By the end of Q3, no other machine had been able to beat the time of this SC340 running on Yokohama tires.

This gave the WedsSport ADVAN SC430 team, LEXUS TEAM WedsSport BANDOH, its first pole position ever in the GT500 class.

For Andre Couto it was his first GT pole in eleven years, having won his last in 2001 while competing in the predecessor of the SUPER GT, the All-Japan Championship.  For the LEXUS SC430, this was the third pole position of the year and 13th overall in SUPER GT. And for the WedsSport ADVAN SC430 tire supplier, Yokohama, it was the first GT500 pole since 2003.

In the GT300 class, Yuhi Sekiguchi drove the S Road NDDP GT-R to win the class pole, his first ever. It was also the first pole position for the FIA GT3 spec Nissan GT-R competing in the GT300 class from this season.

Also, after foreign makes won the first four pole positions of the season, this Nissan GT-R pole is the third straight by a Japanese make, following the Honda CR-Z in round five and the Toyota Prius in round six.

Andre Couto: “I’m really happy to win my first pole position in eleven years. I want to dedicate this pole to my son Afonso (who died of leukemia recently). This time the set-up went extremely well from the time we started running and we were able to get consistently good performance whether it rained or not. The tire performance was also good, and the team staff and engineers also did great jobs for me. And I also had confidence that I would get a good result driving this good machine. I am going to enjoy this great performance all through the evening.”

Yuhi Sekiguchi: “In the morning practice we were beaten by the Aston Martin after we changed to intermediate (light rain) tires at the end of the session. But in the official qualifying we recorded the fastest time in all three sessions, Q1, Q2 and Q3, which makes me very happy. I wasn’t able to compete in the last round at Fiji Speedway, but I say that the car was very fast in the pouring rain. This time too, the machine was a big help to me in [the rainy] Q1. In Q3 with the rain stopping, the other cars were starting to record faster times, and to be honest it was tough going for a while, but I found that I was able to work through the tough mental challenge and perform well.”

Matsuda and de Oliveira earn first win in 2012 at Fuji