The #17 Astemo NSX-GT, sporting a plain carbon bonnet after a practice off for Matsushita on Saturday morning, led home the #100 Team Kunimitsu car of Naoki Yamamoto and Tadasuke Makino by a margin of 13 seconds after a gruelling 65-lap race on Sunday afternoon.

Completing the podium was the #24 Kondo Racing Nissan Z shared by Daiki Sasaki and Kohei Hirate that started on pole position.

A seventh-place finish for NDDP Nissan pairing Katsumasa Chiyo and Mitsunori Takaboshi means they maintain the points advantage heading into next month's Motegi season finale, with a buffer of 2.5 points over Impul Nissan pairing Bertrand Baguette and Kazuki Hiramine, who finished sixth.

Tsukakoshi and Matsushita head to Motegi with a four-point deficit to the leaders, having jumped to third overall.

Sasaki in the Kondo Nissan led the field to green at the start of the race ahead of Makino's Honda, while Matsushita found himself fourth behind the Racing Project Bandoh Toyota of Yuji Kunimoto.

That was how the order stayed until an early full-course yellow period on lap 17, caused by the Team Mach Toyota 86 MC getting stuck in the gravel, allowed Matsushita the chance to clear Kunimoto for third.

The pitstop phase began on the minimum cut-off of lap 22, with Makino first of the leaders to come in, followed by Matsushita next time by.

Yamamoto and Tsukakoshi took over from their respective teammates, but a faster turnaround by the Real Racing crew put Tsukakoshi ahead.

Sasaki left his pitstop until lap 27, but Hirate would resume in third behind the two Hondas, setting the tone for the rest of the race.

Tsukakoshi was able to steadily build a cushion at the front of the field, and as the race wore on it became clear that Yamamoto would have to turn his attentions towards fending off Hirate in the fight for second.

As Tsukakoshi scored Real's first win since last year's Fuji 500km, and a second for Honda this year, Yamamoto barely managed to cling on to second place, crossing the finish line a scant 0.291s ahead.

Second for Yamamoto and Makino keep the pair in title contention, but 17 points down on the leaders with 21 left to play for. 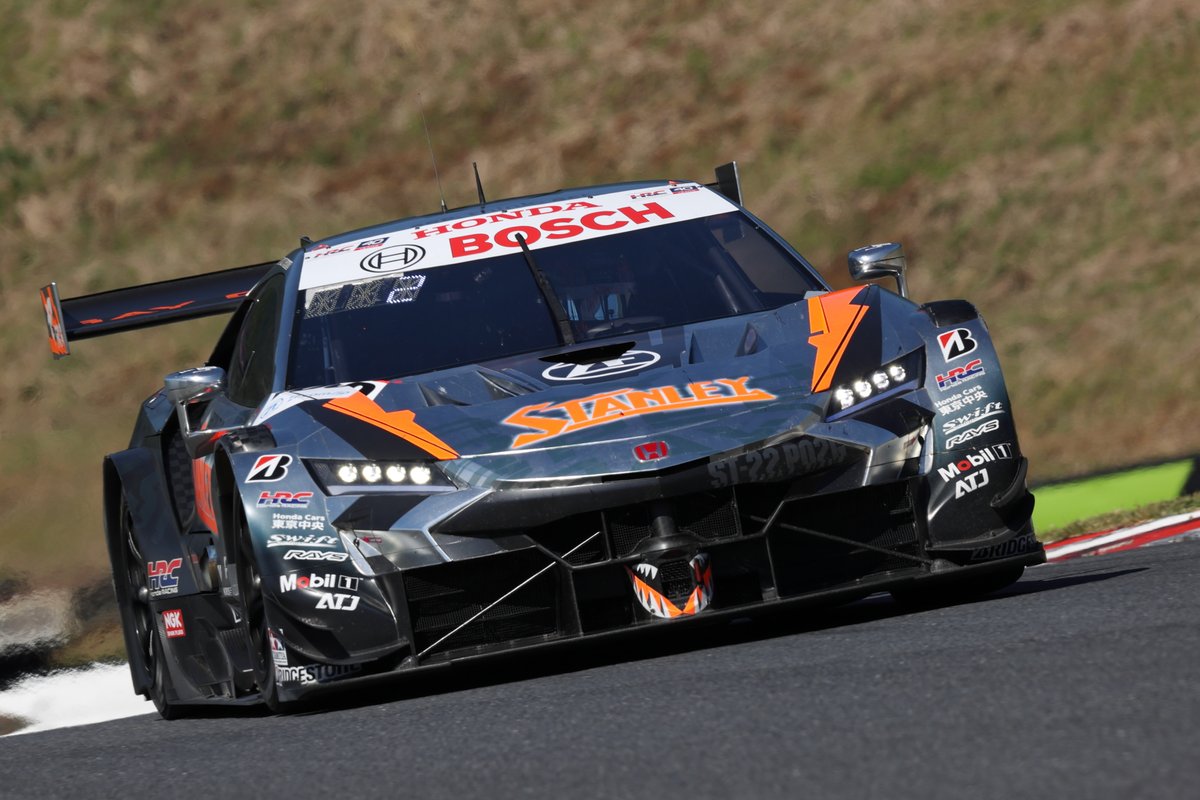 Yamashita spent his entire stint coming under intense pressure from Hiramine in the Impul Nissan, but with a handful of laps to go Hiramine made a crucial mistake while trying to pass the Toyota at Turn 2, briefly going off-track and conceding fifth place to the Bandoh Supra now driven by Sena Sakaguchi.

Moments earlier, Takaboshi managed to pick up an extra point by clearing the #36 TOM'S GR Supra of Sho Tsuboi in the battle for seventh, giving Takaboshi and Chiyo vital breathing space at the head of the standings.

Behind the #36 car of Tsuboi and Giuliano Alesi, the points finishers were completed by the other TOM'S car, the #37 of Sacha Fenestraz and Ritomo Miyata that started from the pitlane, and the #39 SARD Toyota of Yuhi Sekiguchi and Yuichi Nakayama.

Fenestraz and Miyata are the final crew in contention for the championship, level on points with Rookie Toyota pair Yamashita and Oshima.

NISMO pair Ronnie Quintarelli and Tsugio Matsuda saw their hopes of a third title as a duo come to an end after finishing 14th following a problem early in Matsuda's stint that necessitated a trip to the pits.

Their deficit of 21 points means they can only at best match NISMO colleagues Chiyo and Takaboshi, but with no wins so far this season they would lose to the NDDP car, which has won twice, on countback.

Despite a difficult race in GT500, Toyota could celebrate another win in the GT300 class as Saitama Toyopet pair Hiroki Yoshida and Kohta Kawaai bagged a first win since the 2020 season-closer. 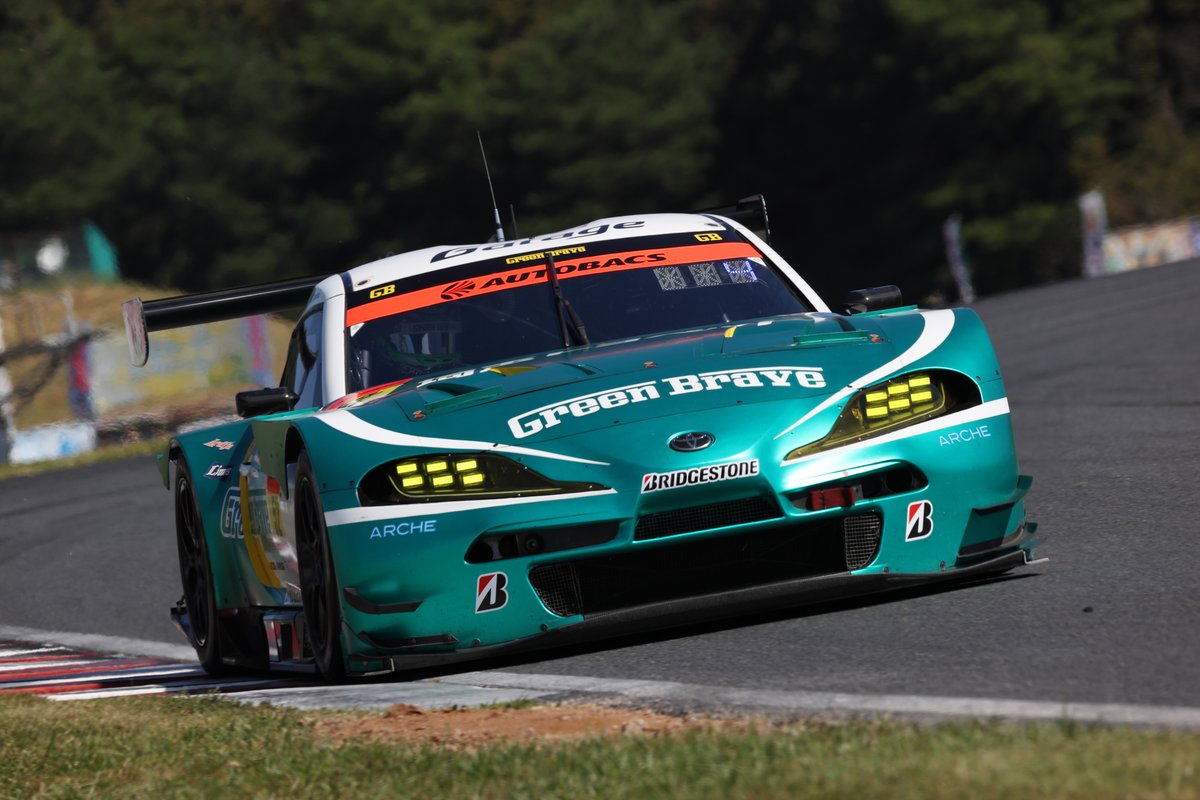 Kawaai spent the opening part of the race engaged in a fierce battle with the pole-winning Subaru BRZ started by Takuto Iguchi, as the two JAF GT300-rules cars sprinted away from the rest of the pack.

But once Kawaai had cleared Iguchi on-track in the opening stint, there was no stopping the #52 GR Supra, as Yoshida took over at the pitstop phase and kept his opposite number in the Subaru, Hideki Yamauchi, at bay all the way until the chequered flag.

Completing the podium was the LEON Racing Mercedes-AMG GT3 of Naoya Gamou and Takuro Shinohara, who leapfrogged the #88 JLOC Lamborghini Huracan GT3 Evo of Takashi Kogure and Yuya Motojima in the pitstop phase.

The #10 Gainer Nissan, which had been second overall coming to Autopolis, finished seventh to keep Riki Okusa - joined this weekend by Yusuke Shiotsu in the absence of Ryuichiro Tomita - within six points of the Kondo pair.

Three more crews remain in the title hunt mathematically: Saitama Toyopet, LEON Racing and the #11 Gainer car of Hironobu Yasuda and Keishi Ishikawa, who toiled to a 14th-place finish.