Naoki Yamamoto took a first win of the Super Formula season in an incident-strewn first leg of this weekend's Suzuka double header, as pre-race points leader Ryo Hirakawa was caught up in a major crash.

From pole, Dandelion Honda driver Yamamoto was never seriously threatened in a race that featured three safety car periods caused by crashes, with the last of those sending the cars of Hirakawa and Ukyo Sasahara heavily into the barriers at Turn 1.

Mugen driver Sasahara was defending fourth place at the end of lap 23, following the second safety car period, from the cars of Sho Tsuboi, Kamui Kobayashi and Hirakawa, who had recovered to seventh from the back of the grid.

As Sasahara got a poor exit out of the final chicane defending from Tsuboi, he was drafted by all three of his pursuers, resulting in them all entered Turn 1 four-wide.

Hirakawa was on the very inside, with Sasahara to his left, but Sasahara jinked the other way approaching the corner and collided with Tsuboi - pitching the Red Bull-liveried car into the barriers at high-speed on its side, and also collecting Hirakawa.

Both Sasahara and Hirakawa were able to escape their cars apparently uninjured, while Tsuboi sustained a puncture and broken front wing in the collision.

Poleman Yamamoto's task at the start was made easier by fellow front-row starter Tomoki Nojiri (Mugen) suffering an apparent electrical issue on his way to the grid, which forced him to drop from second to the rear of the field ahead of the start.

That cleared the way for an early Dandelion one-two as Yamamoto led Nirei Fukuzumi, and after a first-lap caution - caused by Tadasuke Makino suffering a puncture and crashing at Dunlop Corner - Yamamoto proceeded to build up a two-second gap out front.

On lap nine of 28 however, Fukuzumi slowed with a gearbox issue, promoting KCMG driver Kobayashi to the role of Yamamoto's nearest challenger until he stopped on lap 13.

Yamamoto meanwhile left his pitstop until lap 18, and on the next lap the safety car was out again, this time for Nobuharu Matsushita crashing heavily at 130R following a puncture.

While several cars were still to pit at this point, led by Tsuboi, Yamamoto was comfortably back in front by the time the race resumed on lap 23, aided by a slow stop for Kobayashi.

However, the newly-crowned SUPER GT champion still had to survive one more restart with two laps to go following the Turn 1 crash involving Sasahara and Hirakawa, this time with TOM'S man Kazuki Nakajima as his nearest pursuer.

Yamamoto managed to pull out a margin of 1.3s over Nakajima to secure his first win since last year's Sugo race and move four points clear of Hirakawa in the standings. 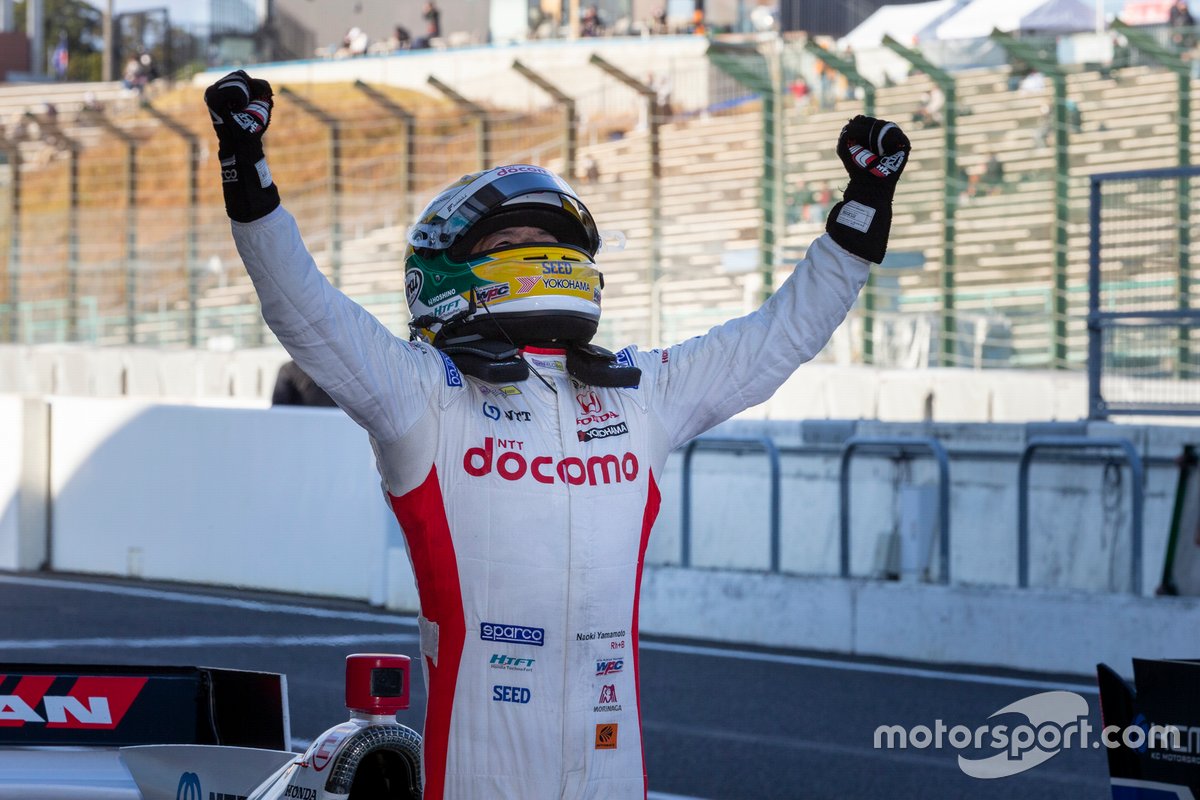 Yuji Kunimoto profited from a good stop to score his first podium since 2018 and lead a three-four for KCMG ahead of Kobayashi, who survived the earlier melee at Turn 1 unscathed.

Nick Cassidy was fifth for TOM'S, keeping himself within nine points of the championship lead, followed by the late-stopping Inging car of Hiroaki Ishiura.

Nojiri managed to salvage four points for seventh from the back of the grid, also stopping late, while the points finishers were completed by Toshiki Oyu (Nakajima) and Kondo Racing pair Kenta Yamashita and Sacha Fenestraz.

Yuhi Sekiguchi (Impul) was a non-starter after his car stopped on the first warm-up lap, with a throttle issue, triggering an extra formation lap sequence.