Super Formula points leader Tomoki Nojiri says he wants to put on a performance in Sunday's Motegi race befitting of a champion, as he seeks to wrap up the title with a race to spare.

With three wins from the first five races of the year, including August's first Motegi race, Nojiri goes into the penultimate round of the 2021 campaign with a 45-point lead and a strong chance to become the first driver since Loic Duval in 2009 to win the championship a round early.

The Mugen driver bolstered his chances by qualifying third in tricky conditions, while nearest title rivals Yuhi Sekiguchi and Toshiki Oyu could only manage sixth and eighth on the grid respectively.

But Nojiri says he will not be satisfied to merely scrape home with the points he needs to put the title out of reach.

"Because I will start from [third] position, I plan on wrapping up the title, so if we are able to clinch it I want to do a strong race, a race that will make people think I'm a worthy champion," said Nojiri.

"[On Sunday] the conditions may be difficult as well, so I will focus hard to bring out my best performance, and think only about being first when the chequered flag comes out."

It was Nojiri's Mugen teammate Hiroki Otsu that stole the show in the final segment of qualifying, taking his first career pole by virtue of being the only driver to opt for slicks on a drying track.

Explaining his decision to stick with wet tyres, Nojiri said his strategy was based around doing the same thing as Oyu and Sekiguchi, so that he wouldn't be cut adrift from his main title rivals if things went wrong. 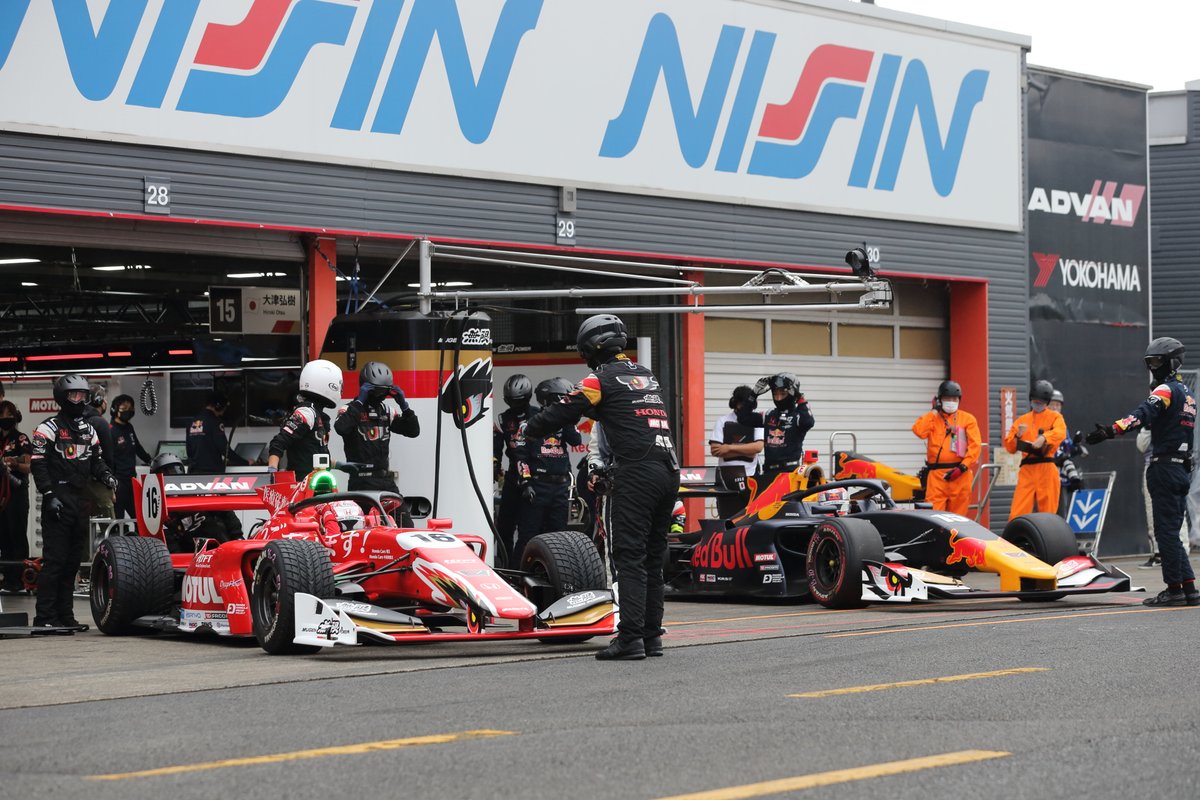 "In Q3, fortunately because of the layout of the pit garages, we were in a position to keep an eye on what Oyu and Sekiguchi were doing and change our strategy after the out lap [if necessary]," he explained.

"Nobody knew how the conditions would change, but we decided to base our strategy on what the other two did, so that even if it went wrong it would go wrong for all of us. They started their attack laps on rain tyres, so we did the same thing and the chance of using slicks disappeared.

"But I did a mistake on my out lap, so I asked [the team], 'is there time to do one more lap on a new set of rain tyres?' They said yes, so we decided to box and put on the new rain tyres.

"I think it was a difficult session for the teams as well, but every time they sent me out on track in perfect shape, so I want to thank the team."

How Nojiri can win the title on Sunday

Super Formula's dropped score system and qualifying bonus points makes calculating championship permutations fiendishly complex, but whatever happens, Nojiri will win the title if he finishes in at least the position he starts.

He would also clinch the title with a fourth-place finish, as in such a scenario he would end up on an effective score of 82 points, equal to the highest number that Sekiguchi can still reach but comfortably ahead on countback.

For Sekiguchi to maintain any title hopes into the Suzuka finale, he must win on Sunday and hope Nojiri comes fifth or lower. He can also afford to finish second, assuming Nojiri finishes ninth or worse.

As for Oyu - nominally ahead of Sekiguchi in the standings but with more points to drop - nothing less than a win will do, and in such a scenario he would have to hope Nojiri can do no better than sixth.

Nirei Fukuzumi is the only other driver still in the championship hunt at this stage, but has to pull off an improbable victory from 14th on the grid while praying Nojiri is no higher than ninth come the chequered flag.