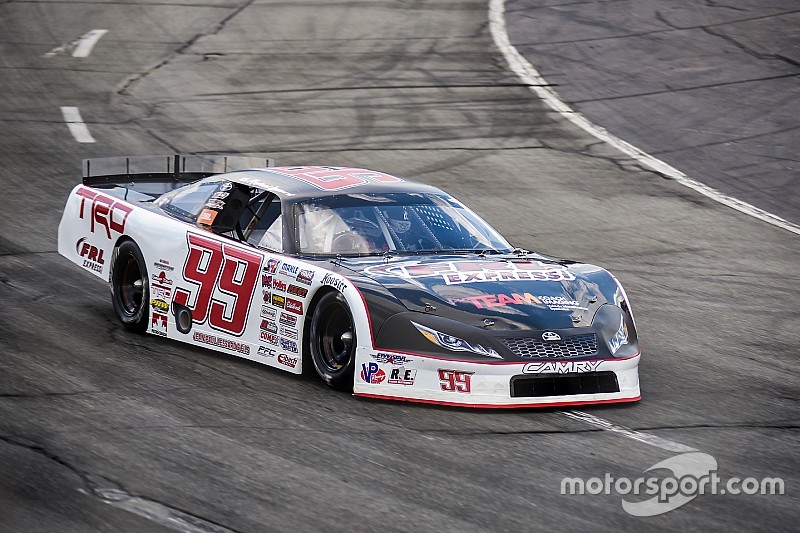 Raphaël Lessard must like racing at Hickory Motor Speedway in Hickory, North Carolina.

Almost one year after winning his first CARS Tour race on the same track, the Saint-Joseph-de-Beauce, Québec native was able to score his second consecutive tour win at the track taking the checkered flag in the second of two 75-lap events as part of the Scott McCorkle’s Liberty Buick & GMC 300.

Lessard drove his No. 99 FRL Express/Toyota-TRD/JBL Audio Toyota Camry prepared by David Gilliland Racing to a fourth-place finish in the first race. Lessard was challenging Brandon Setzer in the race for second place when the two got together bringing out the yellow flag. Both drivers were able to continue with Lessard able to rebound for a top-five finish.

“The incident with Brandon Setzer was not intentional, it was a racing incident,” said Lessard. “I should not have taken the corner at that speed, but the lap before, he left me a lot of room and the lap after he closed on me. We had a bit of a rocky start tonight with the collision in the first duel, but we managed to conclude the evening positively as we left with a victory.”

“I cannot thank enough David Gilliland Racing for the tremendous job on my Toyota Camry which was ready for the second race,” Lessard said.

Another race, another battle

In the second race Matt Craig and Lessard had a long and hard-fought battle lasting several laps.

“I was quicker than he was on the inside of the track, and he was faster on the outside, keeping us side-by-side during a few laps,” said Lessard. “In the end, I won our battle. It was really fun to race against him.”

Lessard was able to take the top spot within 30 laps of the second race with Tate Fogleman following closely. Fogleman and Lessard made contact in the race that almost send Lessard spinning; however the teenager was able to regain control of his car while Fogleman was forced to fall back after suffering damage. This allowed Lessard to regain a comfortable lead and cruise to the win.

Lessard’s next late model race will be held on Sunday, May 21st, when he participates in the Short Track U.S. Nationals at Bristol Motor Speedway in Bristol, Tennessee.