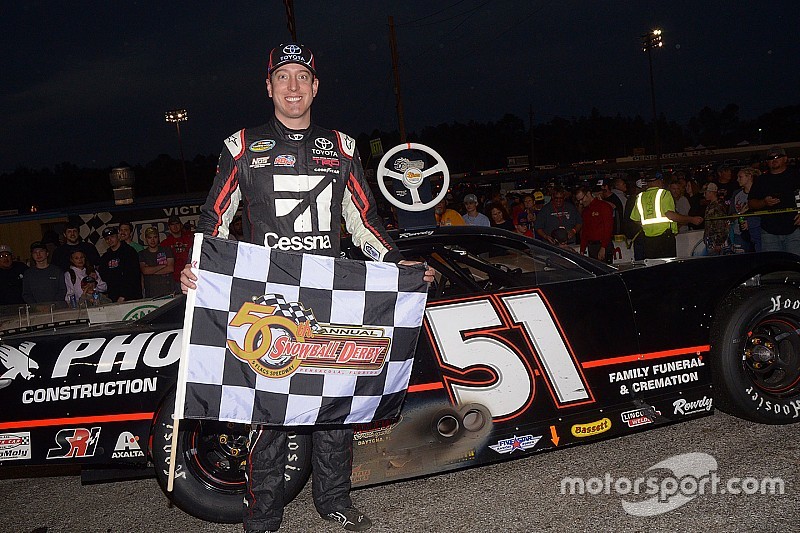 Shortly after officially closing the 2017 NASCAR season, Kyle Busch found himself back in Victory Lane.

Busch, who was honored at Monster Energy NASCAR Cup Series Awards on Thursday night in Las Vegas for his runner-up finish for this season’s championship, wasted little time getting back behind the wheel.

Busch rallied late in Saturday night’s 50th anniversary edition of the Snowball Derby to claim the prestigious Super Late Model race victory for the second time in his career (He also won in 2009).

After restarting third with 66 laps remaining in the 300-lap event, Busch was able to work his way around Bubba Pollard for second place with 22 laps to go and then maneuvered past Jeff Choquette for the race lead with 16 laps to go.

“This is huge. Everybody dreams about winning a Snowball Derby. It feels really good today because we had such a good car on the long runs and we outran those guys,” Busch said. “We were able to drive through and pass them, it wasn’t a short sprint to the end on tires, or anything like that.

“I couldn’t be prouder of everyone at Kyle Busch Motorsports for the hard work they put in to bringing home this win.”

With 40 laps remaining in what turned out to be a 66-lap green-flag run to end the race Busch said he felt he could make it to the front.

“I started inching in on those guys – Harrison Burton started falling back and I started going forward. I was like, ‘OK, we’ve got a shot here, just keep everything underneath me and keep feeling it out.’

“When I got closer I was like, ‘Let’s get by them now’ and fortunately I could. I had enough drive, had enough grip and got by them.”