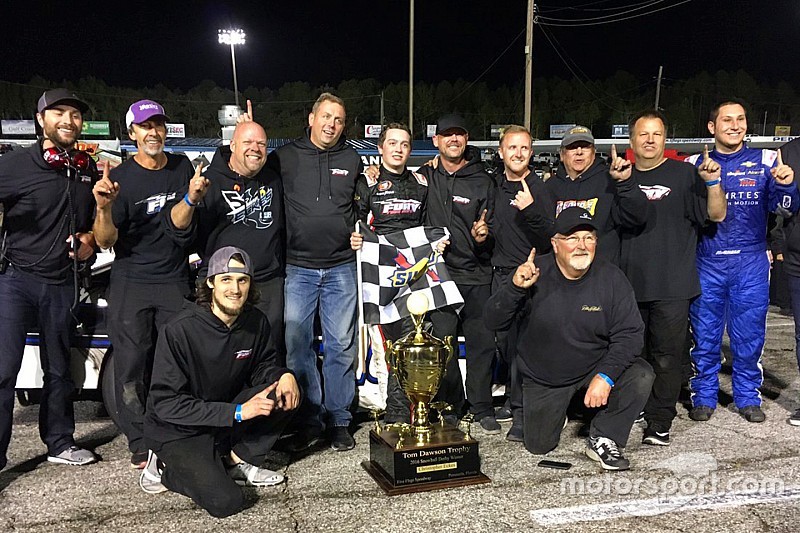 Just barely 16, Christian Eckes is on a winning streak that may well define his motorsports career.

Following a two-day rain delay, Eckes ran down John Hunter Nemechek and passed him with one lap remaining and edged him in a side-by-side duel to win the 49th annual Snowball Derby Tuesday night at Five Flags Speedway in Pensacola, Fla.

The victory in the prestigious 300-lap super late model event is his third consecutive win, all in less than three weeks.

The road to Snowball Derby glory

Eckes, who drove for JR Motorsports’ late model team this season, earned his first win Nov. 19 in the Myrtle Beach 400 then followed that up with a win Nov. 25 in the Thanksgiving Classic All-Star Race at Southern National Motorsports Park in Kenly, N.C.

Now, he’s added his name to the star-studded list of Snowball Derby winners.

“It was a definitely a long week, but it was all worth it,” Eckes told Motorsport.com. “Everything just played in our favor. We got some damage from an incident around Lap 75 but under the controlled caution we were able to fix it.

“After that, the car just took off. We started off 25th and got up to about eighth. I didn’t know how much I had left but after clearing (Ty) Majeski, it was just John Hunter ahead of me.

“I knew we had a chance to win, but I didn’t know just how big of a chance.”

Winning in a photo finish

Eckes and Nemechek spent nearly the final two laps side-by-side, with each car taking turns with its nose edging out front until Eckes took the checkered flag.

“It’s the Snowball Derby, so you have to be aware of what your competitors are going to do but I knew John Hunter wouldn’t race me too dirty. He’s raced me like I race him,” Eckes said. “At the end, it was just a really good race for the fans.”

Eckes, who is from Greenville, N.Y., and has since moved to Cornelius, N.C., finished fourth in the CARS Late Model Tour standings this season driving for JR Motorsports. He ended the 10-race season with five top-five and seven top-10 finishes.

He also made four ARCA starts this year with Venturini Motorsports, with a career-best finish of eighth at Fairgrounds Speedway in Nashville, Tenn.

“With all the bad luck I’ve had this year, it’s really good to be on this kind of streak. I definitely think once a win comes, they keep coming and coming because your confidence just keeps growing,” Eckes said.

“My confidence was pretty down this year because we had a lot of mechanical failures and bad luck. It sure is nice to end the year with some wins.”

Eckes said his 2017 plans are not finalized yet but believes he will run a handful of late model races with JR Motorsports next season, a number of super late models events as well as several more ARCA races with Venturini Motorsports.

“This has been just crazy,” he said. “I still can’t believe I won the Snowball Derby.”