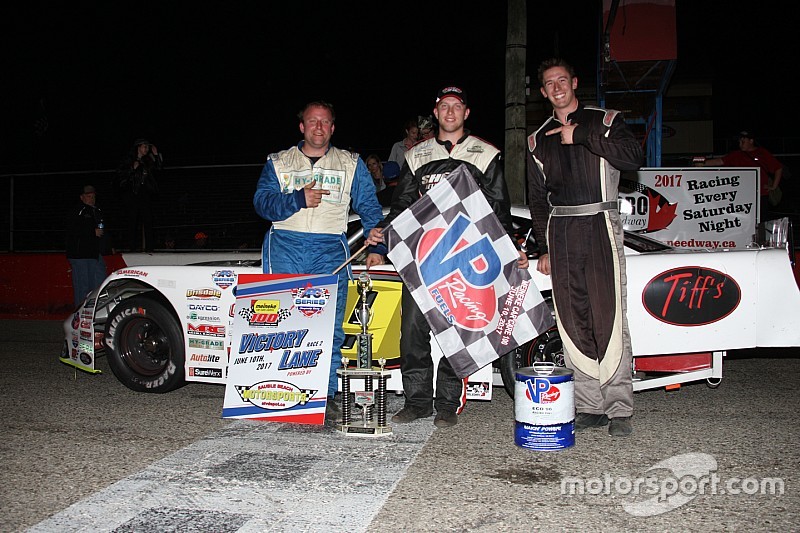 The second round of the APC Late Model Series visited Flamboro Speedway on Saturday with the running of the Meineke 100.

Brandon Watson set fast time in qualifying and won the pole leading a group of 12 drivers that broke the existing track record during the session. Andrew Gresel, Matt Lockwood, Josh Stade and JR Fitzpatrick rounded out the top-five qualifiers.

Matt Lockwood started the race on the point after the pill draw reset the starting lineup and led the first third of the race before he was passed by defending series champion Andrew Gresel to make the pass for the top spot.

Watson was able to catch Gresel and race for the lead on Lap 70 and eventually taking the lead one lap later and he was able to stay out front the rest of the way and score his second straight win in the Late Model series.

The APC Series returns to action this Saturday at “Canada’s Toughest ⅓ Mile” - Peterborough Speedway - with the Hy-Grade Roofing 100.

Mark Gordon becomes another first-time winner in the Ontario Modified Racing Series with his feature win Saturday at Peterborough Speedway.

Gordon and Willow Barberstock led the 12-car field at the start of the 25-lap feature with Gordon jumping out to the early lead.

Gordon was soon challenged by drivers Brad Stevenson and John Baker Jr. – who had come from the eighth and 12th place starting spots, respectively, but he held on for this win and became another first-time winner this season in the modified series.

A total of 127 drivers signed in for competition at Ohsweken Speedway on Rochester Knighthawks and McDonald’s of Paris and Brantford night. The Patriot Sprint Tour versus the Kool Kidz-Corr/Pak 360 Sprint Cars headlined the show with Dylan Westbrook visiting Victory Lane.