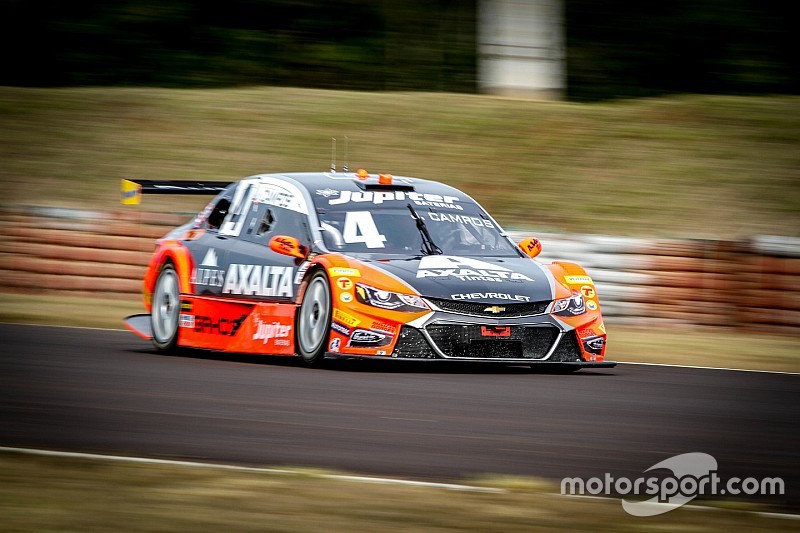 The temperatures have arisen this Sunday afternoon and the Tarumã circuit, among the fastest racetracks in Brazil, featured two great races full of battles, overtaking maneuvers and a variety of strategies. Eurofarma-RC’s Max Wilson won race one, scoring 30 points and his second victory of the season; Axalta C2’s Júlio Campos was the man to be chased on the second heat and won for the first time since April-2015.

The first podium of the day was completed by the Cimed duo that still leads the championship. Felipe Fraga was second and Marcos Gomes, third. On the second race, Thiago Camilo took second place and Allam Khodair, who suffered a gearbox failure on race one, managed to finish third.

Polesitter Rubens Barrichello did not enjoy the Sunday as he did the day before. The 2014 champion couldn’t keep the same pace as his opponents and was in tenth position when his car was hit on the last lap by Rafael Suzuki - who was excluded of the race by the marshals. Barrichello still finished 17th, scoring seven points, and his Medley Full Time team had only 15 minutes to change his left-rear suspension in time for the F1 record-holder to start from the pit lane on race two. And so he did, finishing in 12th and scoring four more points for his campaign.

Championship leader Felipe Fraga led the race until lap 33 of 37, when Max Wilson went on the outside at the fast turn one to take the lead and win the race. "Our car was very competitive. I got to save the tires on the first half of the race so I had better conditions to attack in the final laps. I am glad for the team our strategy worked very well", said Wilson, now in fifth on the championship standings.

The top-10 placed cars have not pitted on race one and started the second heat having to refuel in order to finish. When eight cars started from the pit lane, the advantage was with Júlio Campos, who got the lead when the other cars went to the boxes. He managed to open a gap of almost seven seconds, but Allam Khodair and Thiago Camilo were the fastest cars of the field and quickly got positions two and three.

The duo pushed each other in order to eliminate the gap of the leader. With four laps to go, Camilo overtook Khodair and initiated a chase on Campos. He almost did it - finishing only 0s2 from the winner.

First victory of the season for Júlio Campos in a season that he scored points only three twice until today. "We discovered a problem in the car during the Friday shakedown, so we started our setup work from scratch. Anyway, I am relieved. We developed and soon we will be where we deserve to, among the top-5. This victory was very important for the team", he said.

Brazilian V8 Stock Cars sixth round will be held on the fast track of Cascavel on July 17th.