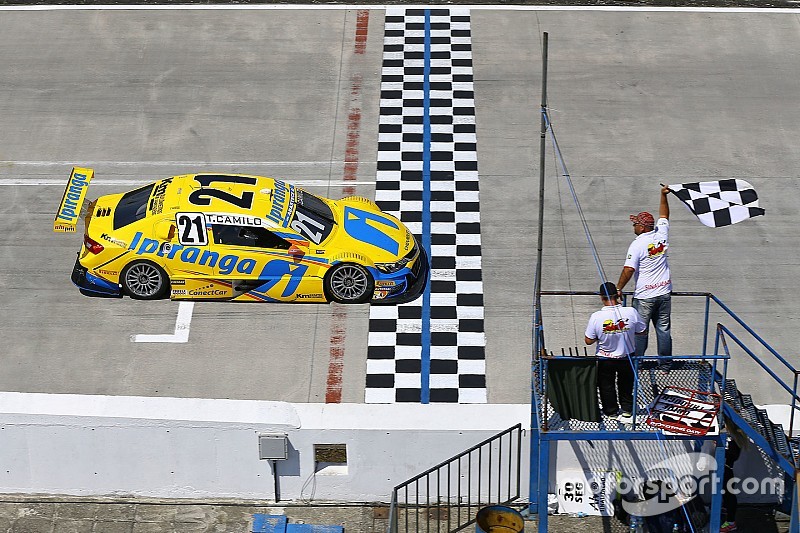 Ricardo Maurício and Allam Khodair completed the podium at heat 1; Rubens Barrichello and Max Wilson joined Camilo in the top-3 at race 2; Fraga extends his championship lead to 44 points

Round nine of Brazilian V8 Stock Cars was held this Sunday afternoon in Curitiba. Under blue sky and temperatures above 30 degrees Celsius, the great crowd at the grandstands could watch Felipe Fraga win lights-to-flag on race one and could see the fantastic recovery of Thiago Camilo, who started race two from the pits to win for the first time this season.

"Starting from pole, leading all the laps and to win for the fourth time this season is a great achievement", says Felipe Fraga, who extends his championship lead to 44 points over Rubens Barrichello. "My team gave me a perfect car and I only have to thank them for the effort in making this possible".

For Camilo, it was an emotional victory in race two. "I am really happy and at the same time with a broken heart for leaving this fantastic team, which welcomed me as a family member since my first race. My goal was to give them this win until the end of the year", highlighted Thiago Camilo, who will move alongside his teammate Galid Osman and long-time sponsor Ipiranga to the Mattheis team - from where Red Bull departs next season.

Altough Fraga lead race one from lights-to-flag, he had the close company of Ricardo Maurício. The Eurofarma-RC driver tried twice to overtake the championship leader, but both paces were too similar, according to Maurício. "What have missed was starting from pole, I think. I pushed as hard as I could, but those points were important as well to risk everything for just five more points", he justified.

Fraga was in heaven. "It was a hard race, but the weekend was perfect for us and we could open the gap a little more in the standings", said Fraga, who won the Million Reais Race in Interlagos, then race one in Londrina the previous round, and now again in Curitiba.

Rubens Barrichello, 11th, was the best placed driver among those who have pitted for fuel in race one. His job was made easier during the first lap when Abbate, starting from pole, was hit by Julio Campos on turn one - end of race for both. Then, all the drivers in front of the F1 veteran went to the pits, so Barrichello’s job was to gain an advantage over his opponents and cruise to win for the third time this season. Although Thiago Camilo was making a quick progress, lapping a second faster than anyone on the track, there would not be much time for the Ipiranga driver to catch Rubens, who was almost seven seconds away in the lead.

Then, with six laps to the end, the safety car came in so the cars of Felipe Lapenna and Átila Abreu could be taken off the track after a minor crash and a puncture, respectively. The green flag was waved with four laps to go. Camilo had fresher rear tyres and started the chase on Barrichello.

The duo made the crowd stand up in the grandstands, and on Thiago’s first attempt, at turn one, Barrichello closed the door to maintain his position. What the 44-year-old racer did not count was on the fact that Camilo had one more push-to-pass, and the Ipiranga driver engaged it on the opposite straight - not the best place to do so - and completed a superb overtake round the outside of turn three to take the lead with a lap to go.

Camilo, who drivers the car #21, gained 21 positions in the race to win for the 21st time in his Stock Car career. "What a coincidence", he said, astonished. "This win reflects our team spirit of dedication, of overcoming all the difficulties, as we did last year in winning the Million Reais Race after a horrible crash the previous round here in Curitiba. I am really thankful to those guys. I have to recognize the loyalty and sportsmanship by Rubens’s part. It is not everyone who gives that space and accepts that kind of maneuver and still fights hard. Hats off to him", said Thiago.

As for Barrichello, the safety car ruined his plans, but he was not bothered at all. "It is what it is: sometimes it helps us; sometimes it does not. I tried to defend my position, but I knew he had fresher tyres and I fought the most loyal way possible. I have to be satisfied. We had not have Fraga’s pace, so we had to play with the strategy", he told.

*Results subject to approval by the stewards