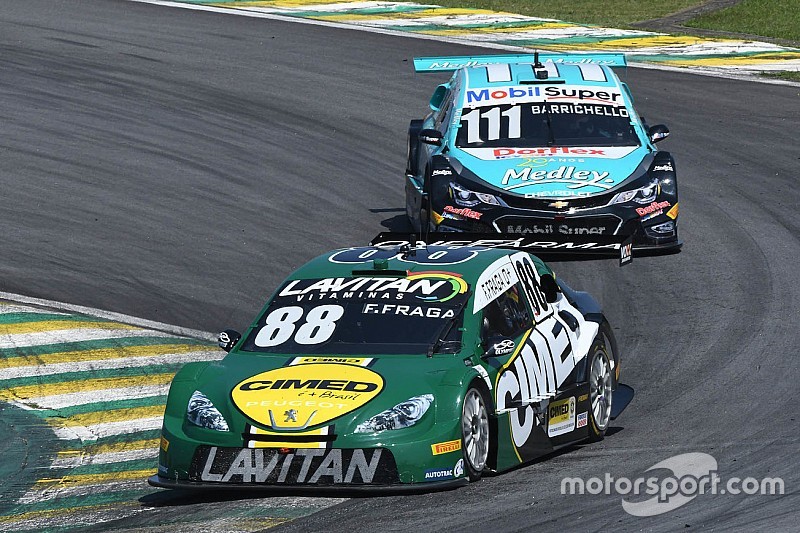 With three rounds remaining in the season, Felipe Fraga tries to extend his lead in the championship

There are still five races remaining to the end of the season - two double headers and the final race in December in Interlagos -, and the driver market is already taking shape in Brazilian V8 Stock Cars. Teams, drivers and sponsors are planning the 2017 season while there is still a plenty to happen: the title chase, for example.

Felipe Fraga leads the standings 44 points ahead of Rubens Barrichello. There are 150 points at stake, 45 of them this weekend at Goiânia. Weather prediction shows a sunny and hot Sunday (Nov 6th) at the heart of Brazil - conditions to keep the competition wide open at the 3.835-km track.

While the driver market is still far from settled, there are some important confirmations that were already announced during the previous rounds. Following Red Bull’s shocking announcement that it would be withdrawing from Brazilian V8 Stock Cars, five-time champion Cacá Bueno was confirmed as the new teammate for Marcos Gomes at the Cimed Racing Team, leaving a big question mark over championship leader Felipe Fraga.

The 21-year old sustains a big advantage in the standings, won four races this season and took two pole positions, and still has nowhere to go. Despite of being replaced, the possibility of Fraga getting no race seat for 2017 is practically null according to the paddock insiders. Furthermore, Fraga has a lot more at stake in the moment while racing for his first Stock Car title.

The ‘silly-season’ started much earlier this year compared to the previous seasons, but some teams and sponsors could advance with their 2017 plans. With Red Bull leaving the series, the Mattheis team confirmed the arrival of a new sponsor: petrol giant Ipiranga leaves the RCM team taking Thiago Camilo and Galid Osman to the Andreas Mattheis organization. Eurofarma-RCs rushed to announce a third car for 2017 with Daniel Serra at the wheel joining Ricardo Maurício and Max Wilson - the longest pairing in Brazilian V8 Stock Car history.

Another interesting move, similar to Ipiranga’s, was with the Shell Racing team. The cars of Ricardo Zonta and Átila Abreu have been being prepared by Mattheis’ son, Rodolpho, since 2012. For 2017, the Dutch brand will take its drivers and colors do the TMG Racing team - as announced earlier this week. Exactly the same organization Abreu raced for from 2012 to 2015 - formerly known as AMG Motorsport.

An interesting weekend comes ahead inside the track and out. Brazilian V8 Stock Car event have Brazilian F3 Championship and the Mercedes-Benz Challenge as the support races.