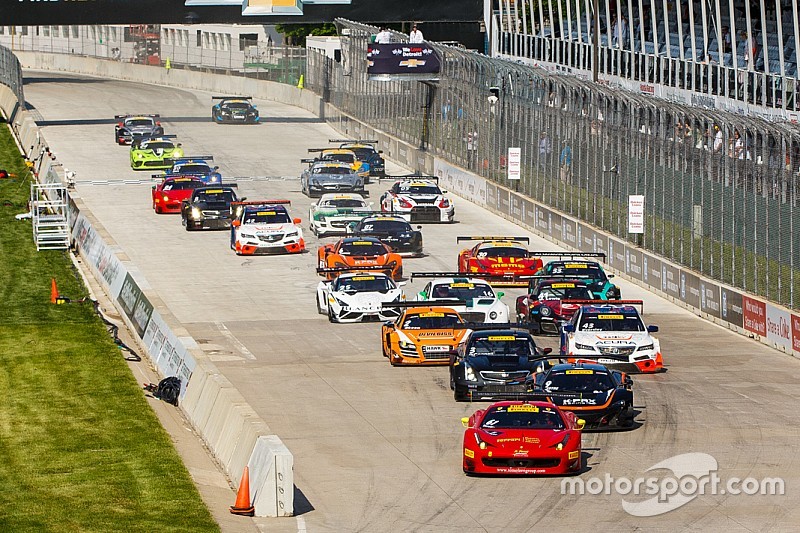 Over 100 drivers set to Battle at Road America

Elkhart Lake, Wis. – The Pirelli World Challenge's GT/GTA, GT Cup presented by MOMO, GTS and TC/TCA/TCB classes head to Road America, America's National Park of Speed, June 26-28. Over 100 drivers across the series' seven classes will compete in the DeVilbiss Grand Prix at Road America presented by Cadillac. GT/GTA drivers will compete in Rounds 11, 12, and 13 of the championships, while GT Cup competitors will race Rounds 10 and 11. GTS competitors will race Rounds 9 and 10 and TC, TCA and TCB competitors will compete in Rounds 7, 8 and 9. Of note, GT/GTA classes will make up the Round 11 race that had originally been scheduled for Detroit that was canceled due to inclement weather.

This visit marks the 2nd consecutive season and 15th time Pirelli World Challenge competitors will race at the challenging 14-turn, 4.048-mile road course. With 2015 being the inaugural season for GT Cup, this is the first time the class will compete at Road America.

A number of 2014 Road America winners including Mike Skeen, Tim Pappas, Adam Poland, Jason Wolfe, and Glenn Nixon are entered and look to get back on the top step.

Beretta Continues to Lead in Class, with Estre Knocking on the Door

Olivier Beretta, of Monte Carlo, Monaco in the No. 61 Ferrari of Ontario/Toronto/Alberta Ferrari 458 GT3 Italia, comes into the Road America weekend continuing to lead in GT drivers' points (918) after scoring a 2nd in Round 10 at Detroit. Beretta has recorded three wins on the season and has won previously at Road America in another sports car racing series.

Beretta holds a 45-point lead over Kevin Estre, of Lochau, Austria, in the No. 9 K-PAX Racing with Flying Lizard Motorsports McLaren 650S GT3, with 873. Estre recorded his third win of the season at Detroit and will make his first career start at Road America.

Johnny O'Connell, of Flowery Branch, Ga., comes into the weekend third in GT Drivers' Championship points with 801. O'Connell finished 4th at Detroit and scored back-to-back wins at Canadian Tire Motorsport Park in his No. 3 Cadillac Racing Cadillac ATS-V.R. O'Connell's teammate, Andy Pilgrim, of Boca Raton, Fla., in the No. 8 Cadillac Racing Cadillac ATS-V.R, has had a hard luck 2015 season and sits 17th overall in GT.

Ryan Dalziel, of Windermere, Fla., returns to the series after a scheduling conflict kept him out of Detroit's Round 10. Dalziel, in the No. 31 EFFORT Racing/World PMO Porsche 911 GT3 R sits 4th with 784 points. Dalziel has three runner-up finishes, two thirds and a fourth place finish in nine races. Dalziel's teammate Michael Lewis, of Laguna Beach, Calif., was promoted from the GTA class to GT at Barber and sits 7th overall in the standings. He will drive the No. 41 EFFORT Racing/Curb-Agajanian Porsche 911 GT3 R.

Ryan Eversley, of Atlanta, Ga. in the No. 43 RealTime/Acura Motorsports/HPD Acura TLX-GT enters the weekend 5th in points. He has previous experience at Road America in another sports car racing series.

Robert Thorne, of Littleton, Colo. in the No. 6 K-PAX Racing McLaren 650S GT3 and Peter Cunningham, of Milwaukee, Wis. in the No. 42 RealTime/Acura Motorsports/HPD Acura TLX-GT, look for continued positive season results at Road America. Thorne finished second to his teammate Estre in Round 7 at Barber (Thorne's best result of the season), while Cunningham had a season best 8th in Round 6 at Barber. Of note, Road America is Cunningham's home track and he has two Pirelli World Challenge wins at the track (2003 and 2004 in Touring Car).

Last year, Mike Skeen, of Charlotte, N.C., swept the Road America weekend with two wins in GT. Piloting the No. 2 DeVilbiss/Hawk Performance Audi R8 LMS ultra, Skeen comes off a challenging Detroit weekend after a mechanical issue led to an early retirement from the race. Skeen sits 8th in the championship.

JD Davison, of St. Petersburg, Fla., in the No. 33 AE/Replay XD Nissan GT-R NISMO GT3 sits 9th overall in the GT Championship coming into Road America after scoring a 5th at Detroit. Davison will start his second career race at Road America.

Bentley Team Dyson Racing heads into the weekend with Butch Leitzinger, of Rebersburg, Pa. piloting the No. 20 Bentley/Breitling/Mobil 1 Bentley Continental GT3 and Chris Dyson, of Pleasant Valley, N.Y. behind the wheel of the No. 16 Bentley/Breitling/Mobil 1 Bentley Continental GT3. Dyson finished 3rd at Detroit and sits 6th in the Championship. Leitzinger had a disappointing Detroit as a crash in one of the practice sessions damaged the No. 20 car beyond repair for the race and he was unable to compete in Round 10.

The 16-driver GT field is rounded out by series veteran James Sofronas, of Pound Ridge, N.Y., in the No. 14 GMG Audi R8 LMS ultra GMG Racing/Spyder/Mobil 1, and Duncan Ende, of Los Angeles, Calif. in the No. 64 Merchant Services Ltd./Linospresso USA Ferrari 458 Italia GT3. Ende has experience at Road America in another sports car racing series, while Sofronas has 12 career PWC starts at Road America.