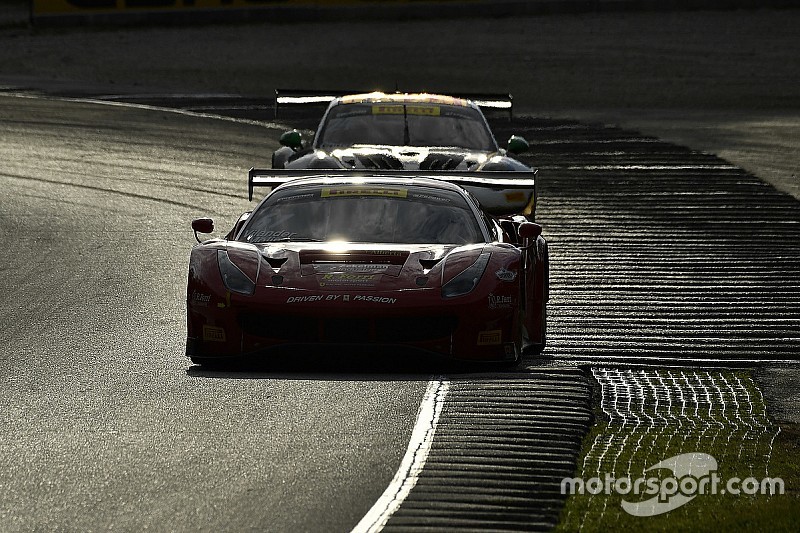 Parente suddenly slowed on lap three and dropped to fourth, allowing Baptista to hit the front. Parente clung to fourth for a while, despite an ABS failure due to a defective wheel-speed sensor, but Scott Heckert (Lone Star Racing Mercedes) swept past on lap six, and Wolf Henzler (Porsche) and Michael Cooper (Mercedes) quickly followed. Parente then headed for the pits, as did Cooper with a power steering problem.

Vilander stalked Baptista across the opening stint, and took advantage to pass when the leader got loose just before half distance. Having lost the lead, Baptista immediately dived for the pits to hand over to Maxime Soulet – but the pitstop was slow as Soulet struggled to get the car back up to speed.

Spencer Pumpelly, who took over from Christensen, stuttered away from his stop, and Molina – who replaced Vilander in the leading car – enjoyed a healthy lead. Molina stroked home to victory, which puts them on the verge of the SprintX title tomorrow.

Mike Skeen, in for Heckert, chased hard after Pumpelly, and was well ahead of Scott Hargrove, who relayed Henzler in the title-chasing Pfaff-run Porsche 911.

Skeen attacked Pumpelly hard in the final laps, but just couldn't find a way past.

Jeff Segal and Wei Lu won the Pro-Am class in their TR3-run Ferrari after a fierce battle with the Audi R8 of Ryan Dalziel and Parker Chase. Soulet trailed home seventh, but the sister car returned to the track in Andy Soucek's hands, and set the fastest lap to take pole for tomorrow's race.