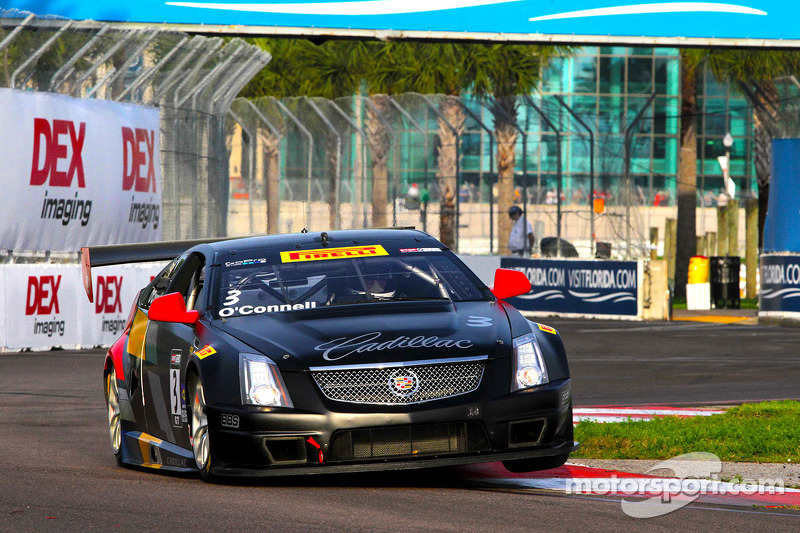 Johnny O'Connell, of Flowery Branch, Ga., Dan Knox, of Pilot Point, Texas, and Dean Martin, of Westland, Mich., took wins in Round 5 of the Pirelli World Challenge 2014 season, at the Cadillac V-Series Challenge presented by the Metro Detroit Cadillac Dealers.

Both O'Connell (GT) and Martin (GTS) converted Motul pole positions into race wins, while Knox (GT-A) came from third on the grid to capture his first series victory.

O'Connell, driving the No. 3 Cadillac Racing Cadillac CTS-V.R, got an excellent launch from the standing start and within two laps, had a lead of more than 4.5 seconds on the rest of the field.

From there, O'Connell held off all comers to score his second win of the season and fourth win in his last five starts on the 2.35-mile Belle Isle Park circuit in Detroit. He won by 3.309 seconds after leading all 26 laps.

"The start was huge," O'Connell said. "My strategy was to push as hard as I could early, knowing my car would go off. But all the guys behind me started racing, which slowed them down. I had to keep my eyes down, and get to traffic in the right place. It was a lot about timing and not making mistakes."

The battle in GT was behind him for second. Mike Skeen, of Charlotte, N.C., in the No. 2 Hawk Performance Audi R8 Ultra, made a great start to emerge second, but spent the next several laps holding off O'Connell's teammate Andy Pilgrim. Pilgrim, of Boca Raton, Fla., initially held the position in the No. 8 Cadillac Racing Cadillac CTS-V.R, an off at Turn 3 on Lap 9 dropped him back.

Skeen, Anthony Lazzaro, of Atlanta, Ga., and Andrew Palmer, of Chicago, were the other three then engaging in a scrap for the final podium positions. Palmer started eighth in the No. 21 GMG Racing Audi R8 Ultra, but made three positions up off the start to secure the Optima Batteries Best Standing Start Award. By the race's only restart on Lap 23, he was up to third.

Palmer made it past Skeen for second into Turn 1, in a move that netted him the Cadillac CTS-V Move of the Race. An opportunistic Lazzaro, in the No. 61 R. Ferri Motorsports Ferrari 458 Italia GT3, made it past Skeen on the same lap for third.

Skeen ended fourth for his best result yet since the CRP Racing team switched to the Audi at Round 2 of the season in Long Beach. The pair of K-PAX Racing McLaren 12C GT3s, Alex Figge, of Denver, Col., and Robert Thorne, of Littleton, Col., ended a season-best fifth and sixth in the Nos. 9 and 6 cars.

In GT-A, Knox, in the No. 80 ACS Manufacturing, Inc./Performance SpeedTech SRT Viper GT3-R drove a controlled race while top two starters Michael Mills and Marcelo Hahn both ran into issues during the race.

Mills, of Angleton, Texas, in the No. 41 EFFORT Racing Porsche GT3 R had a moment of contact with GTS driver Mitch Landry, of Lake Charles, La. in the No. 97 VersaCrane/DeepSouth Ford Mustang Boss 302S at Turn 8. Hahn, of Sao Paulo, Brazil, retired after contact at Turn 6 in the No. 0 Reiter Engineering Lamborghini Gallardo FL2.

That said Knox, in only his fifth Pirelli World Challenge series start, was both fast and measured, avoiding traffic and pitfalls to become the fifth different GT-A classified winner in as many races.

"We struggled all day yesterday getting the setup right. But it was fabulous today," Knox said. "We had a great start, lost a couple positions but got some luck to make it back up. We had one close call with a GTS car, but otherwise it was very clean. It's a big deal to win with one of the American entries."

After missing Round 4 in Barber due to injury, Bret Curtis, of Austin, Texas picked up his first GT-A podium in second in the No. 32 Valspar Paint/Spectra Resources/United Steel Supply Audi R8 Ultra. In third was Tim Pappas, of Boston, Mass., in the No. 54 Black River Caviar Mercedes-Benz SLS AMG GT3, for his third straight GT-A podium.

Like O'Connell, Martin was able to complete a flag-to-flag victory in GTS. Driving the No. 50 Picture Cars East/Rehagen Racing Ford Mustang Boss 302S, Martin held off a snarling pack of challengers that could have been covered by a blanket.

At any point, either of the Kia Motors America Kia Optimas, three different Ford Mustang Boss 302s and Jack Baldwin's No. 73 RESET-MD/StopTech/Motul Porsche Cayman S were in striking distance.

But at the end of the day, Martin held on both from the start and the restart to secure his second series victory. His first came in the Sunday round at Detroit last year, and was a crucial bounce back after being caught up in the four-car Ford Mustang Boss 302S accident at the start of Round 4 in Barber.

"This one's a little better (than last year)," Martin confirmed. "After the controversy at Barber, with a brand new car here, it's a great morale booster for us. The Ford Mustang needed it. It's a great comeback for everyone at Rehagen Racing to get this new car ready."

Starting and finishing second was Baldwin, of Marietta, Ga., in the aforementioned No. 73 Porsche for GTSport Racing. It's his fourth podium finish in five races to open the 2014 season.

The big mover on the day was Nic Jonsson, of Buford, Ga., in the No. 36 Kia Motors America Kia Optima. Jonsson started ninth but made a rocket start up to third by the end of the first lap. He made it up to second on Lap 5 when Jack Roush Jr., of Livonia, Mich., in his No. 60 ROUSH Road Racing Ford Mustang Boss 302R attempted to pass Martin on the front straight, but lost the momentum and Jonsson flew past. Baldwin made it back past Jonsson for second on Lap 23, but for Jonsson, it was his third podium finish of the season.

Jonsson's teammate Mark Wilkins, of Toronto, finished fourth in GTS in the No. 38 Kia Motors America Kia Optima with Alec Udell, of The Woodlands, Texas fifth in the No. 17 Watson Racing/MDG Ford Mustang Boss 302S.

Also of note, Mills' pass on Hahn on Lap 12 netted him the Invisible Glass Clean Pass of the Race. The Sunoco Hard Charger Award was given to David Sterckx, of Brussels, Belgium, in the No. 52 Always Evolving Racing Ford Mustang Boss 302S, who advanced 11 positions from start to finish. Sterckx finished eighth in GTS, matching his season-best finish, also set in Round 1 at St. Petersburg.

Both O'Connell and Martin set the fastest race laps in Round 5 and as such, will start from pole in Sunday's Round 6 of the season. Unofficially, although points will follow later today, O'Connell and Baldwin should move into the GT and GTS points leads.