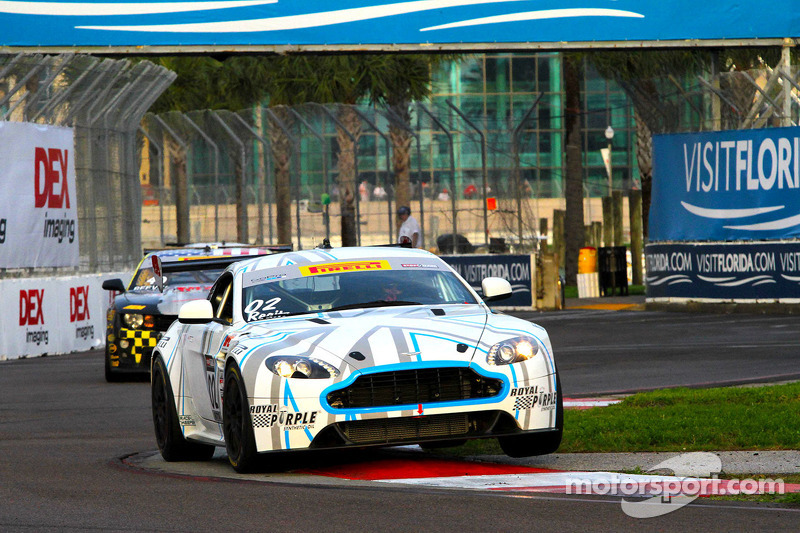 After a successful race weekend at the Grand Prix of Long Beach, TRG-AMR is looking for another one at Barber.

TRG-Aston Martin Racing North America (TRG-AMR) is looking for another strong result at the Barber Motorsports Park presented by Recaro Pirelli World Challenge Round Four and Five this Saturday, April 26 and Sunday, April 27 after a successful race weekend at the Grand Prix of Long Beach.

Auburn, Ala. resident debuts in Pirelli World Challenge at home track
Joining the World Challenge competition is South African native Mikey Taylor, who currently resides in Auburn, Ala. During the 2013 season, Taylor tested extensively with TRG-AMR at Sonoma Raceway in 2013 and became the youngest driver to compete in the Continental Tire SportsCar Challenge at the age of 16 by competing at select circuits. Taylor, who knows Barber Motorsports Park well, is excited to be racing at his home track this weekend.

TRG-AMR's drivers are hot off the Long Beach circuit with personal best finishes
Currently eighth out of 27 drivers in the GTS class drivers' point standings, Denver, Colo., resident Drew Regitz gave a stellar performance in the last PWC round at Long Beach, Calif., where he finished sixth. Regitz boasts a total of four Top-10 finishes in only nine starts in his No. 02 Aston Martin. His TRG-AMR teammate, Nick Esayian, holds the tenth position in the driver's championship after he earned the Sunoco Hard Charger Award at Long Beach. Esayian was able to move up nine spots in Round Three of the PWC on April 13 to finish 10th in the race. Making strong strides and currently fifteenth in driver point standings is Jorge De La Torre, who debuted with the team in St. Petersburg, Fla. At Long Beach, De La Torre finished an impressive 11th in only his second career start. Both Regitz and De La Torre are coming off career best finishes heading into Barber and are eager to continue their success this weekend.

Kevin Buckler, CEO, TRG-AMR North America, LLC on taking his team to Barber Motorsports Park and welcoming new driver, Mikey Taylor:
"I know everybody on the team is really excited about tackling the beautiful circuit at Barber Motorsports Park for the first time with PWC. It is a fantastic racetrack--- technical, busy and will keep the boys on their toes. Our team has had great luck here in the past, but for most of our drivers, this will be the first time they have been there. With Drew & Jorge's strong performances in the last few races and especially Nick's hard charger award at Long Beach, the guys are on their game. I think Nick has raced just about everywhere in the US but this will be a first for him at Barber. We are happy to welcome Mikey to our team and are proud to be fielding four Aston Martin GT4's for this action packed doubleheader weekend."

Mikey Taylor, Driver, No. 09 TRG-AMR State Traditions/National Bank of Commerce Aston Martin Vantage GT4 on partnering with TRG-AMR at Barber:
"After testing with the team last summer, we have been trying to find ways to get me back in the seat of an Aston Martin. Barber Motorsports Park is my home track and I have an ample amount of experience around there, so we decided this is our best shot and we were going to do everything we could to raise the funding to be able to compete. Thanks to some great supporters we did just that, and I am looking to make the best of it! It will be a steep learning curve but I am excited to get out on track on Thursday."

GMG heads to Alabama in search of championship points