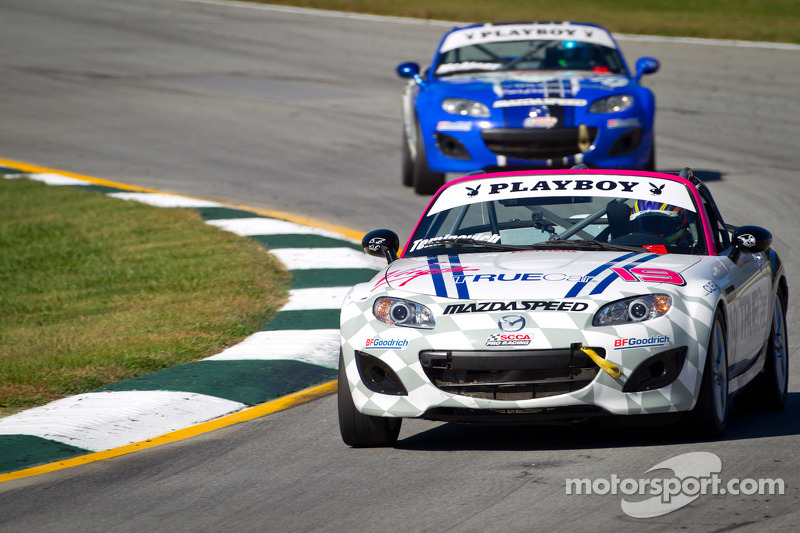 Young up and coming driver Emilee Tominovich (in photo, racing a Mazda Miata) returns to the track where she learned to race to compete in rounds 5 & 6 of the Pirelli World Challenge Championship. She will pilot the #19 Emich Volkswagen Jetta GLI in the Touring Car class.

On May 30, 2014, the 21-year-old racing driver will make her Pirelli World Challenge debut at the same track where racing began for her four years ago. Tominovich will get behind the wheel of the #19 Volkswagen Jetta GLI sponsored by Charter Financial and Chesapeake Electrical Systems, Inc. at New Jersey Motorsports Park to compete in the Touring Car class.

“I am super excited to compete in my first World Challenge race, and the fact that it is at the track where I learned to race is even more special” said Tominovich. “I spent all of 2010 learning to drive on track before competing in my first race at the end of that year, although I am not actually from New Jersey, it still feels like I’m coming home.”

The GLI that Tominovich will be piloting is owned by Fred Emich of Emich Volkswagen. Emich is a regular in the Pirelli World Challenge Touring Car class, but will not be behind the wheel at NJMP. “Emich Volkswagen is really excited to have Emilee Tominovich racing in her Pirelli World Challenge debut in our #19 Revo/NRG/3zero3 Motorsport Volkswagen GLI. We have high hopes that she will have a top performance at her home track in New Jersey Motorsports Park. We wish her luck and look forward further collaboration this season.”

The car will be primarily sponsored by Charter Financial Group and Chesapeake Electrical Systems, Inc. which are both Maryland based companies. Jeffery Furniss and Chadwick Watson of Charter Financial Group have been a big part of the Emilee Tominovich Racing team in 2014. “When the opportunity came up to join Emilee’s team we honestly weren’t looking to sponsor a race car. Emilee is more than a talented female in a male dominated sport. She has completed a four year nursing degree and possesses the character and ruthless drive of what it takes to go to the next level in her sport and her life. Charter Financial Group is proud to be along for the ride and be a partner with Emilee Tominovich Racing,” said Furniss and Watson.

Emilee Tominovich will take the green flag at New Jersey Motorsports Park at 6:10 PM on Saturday, May 31st and 10:20 AM on Sunday, June 1st. You can stream the race live on www.world-challengetv.com or watch it on tape delay on NBC Sports Network. You can follow Tominovich on twitter @etominovich and on Facebook at www.facebook.com/emileeracing for updates all weekend.

McLaren making its return to Detroit with K-PAX