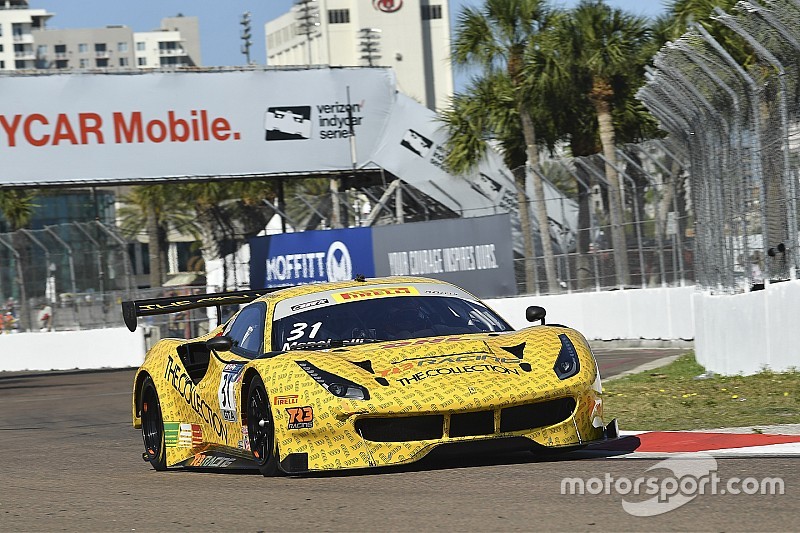 Daniel Mancinelli will start the first race of the Pirelli World Challenge GT series from pole position at St Petersburg.

Alex Riberas (R Ferri Ferrari) took grabbed spot on 1m14.066s halfway through, before Mancinelli – who didn’t complete a time lap in practice yesterday – dipped under the 1m14s barrier with a 1m13.953s.

A red flag interrupted the session with 2m44s on the clock, as Jorge de la Torre found the tyrewall. It was not restarted as the track required further repairs, as it did yesterday.

The only Acura NSX in qualifying was Peter Kox in 14th, after Ryan Eversley hit the wall in his yesterday.

Following his remarkable performance, Mancinelli has been reclassified in the overall GT class.

Lawson Aschenbach got the new Blackdog-run Chevrolet Camaro GT4 off to a flying start by taking pole position for its first-ever GTS class race.

He lapped in 1m18.855s, almost a quarter of a second clear of the Ginetta G55 of Parker Chase. Andrew Aquilante was third fastest in his Ford Mustang, with Jade Buford’s SIN heading the KTMs of Frankie Montecalvo and Martin Barkey.

The new Panoz Avezzano of Ian James qualified ninth in the 19-car field.