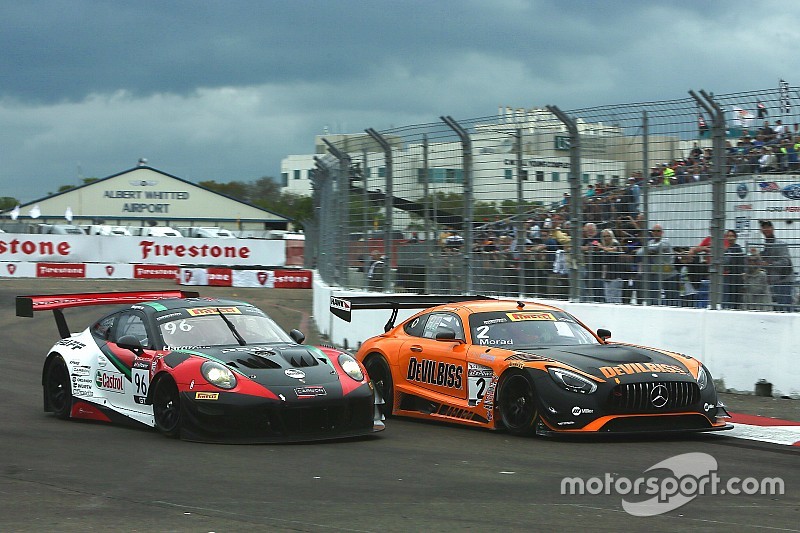 Scott Hargrove came from the back of an 11-car grid to clinch victory in the season-opening Pirelli World Challenge GT race at St. Petersburg, a venue where he has scored wins and podiums in Mazda Road To Indy open-wheelers.

The Canadian, who had to start last after a wall-swipe in qualifying, was aided in his victory quest by a three-car pile-up that caused chaos at Turns 1 and 2. The demise of Parker Chase’s TruSpeed Audi R8, Alvaro Parente’s K-PAX Bentley Continental and Spencer Pumpelly’s TRG Aston Martin Vantage and the ensuing mess vaulted him through to second in his Porsche 911 GT3R, behind compatriot Daniel Morad in the CRP Racing Mercedes-AMG GT3, and ahead of Toni Vilander in the R.Ferri Motorsports Ferrari 488.

The Lap 8 restart saw Morad hold off his compatriot, but at Turn 1 on Lap 18, the Porsche slipped past into the lead. Vilander also slipped through to prevent a Canadian 1-2 and set a new race lap record to secure pole for Sunday’s race.

However, the Finn had no answer for Hargrove who won by 3.9sec, with Morad a further three seconds in arrears.

Daniel Keilwitz in the Callaway Competition USA Corvette C7 GT3-R was fourth, having tried to take the lead with a bold and doomed-to-failure dive down the inside at the start, which helped cause the congestion that wiped out three leading runners. Michael Christensen in the Alegra Motorsports Porsche 911 GT3 R was fifth.