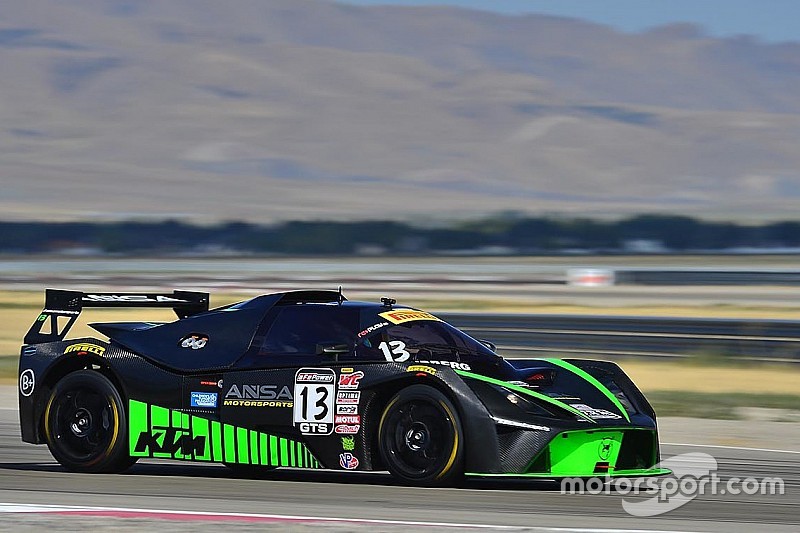 With the standing-start grid set by fastest laps in yesterday’s race, Brett Sandberg lined up on pole in his KTM XBow ahead of Saturday winner Nate Stacy in the Ford Mustang BOSS 302, with Anthony Mantella in third in another KTM, alongside the impressive Maserati Gran Turismo of Mark Klenin. The third row comprised yesterday’s runner-up, Parker Chase in the Ginetta and Lawson Aschenbach’s Chevrolet Camaro, Kevin Marshall’s Lotus GT4, Hugh Plumb’s KTM that took pole yesterday, followed by Scott Heckert’s SIN R1 and Tony Gaples’ Camaro.

Stacy got far too much wheelspin off the line, as Sandberg took an easy lead, and Stacy briefly looked as if he was going to get engulfed, by the more nimble cars behind him. However, Klenin’s Maserati took second going into Turn 2 but carried too much speed into the tight line he was taking and spun to the sand on the outside. He would get going again, but slowly, bringing out first a local yellow, and then the full-course caution.

Thus Stacy hung onto second, while Aschenbach bullied his Camaro past Mantella to take third. Behind was Plumb, Gaples putting two Camaros in the top six, followed by Chase, Heckert, Marshall and Harry Gottsacker in the second Ginetta.

The restart on Lap 3 was clean, but after hassling Sandberg, Stacy had to turn his attention to holding off Aschenbach who in turn had pressure from Mantella. It was the latter who made the move at the Turn 7 hairpin, sending his second KTM around the outside of the Black Dog Speedshop Camaro.

Behind, Gaples fell backward, while Chase and Heckert passed Plumb to grab fifth and sixth – although Plumb regained sixth on Lap 4.

Stacy’s efforts to pass Sandberg through Turns 1, 2 and 3 left him vulnerable to Mantella through 4 and the Carousel, but as per Saturday’s race, Stacy kept it neat and defensive. The difference in this race was that he had a car ahead.

On Lap 8, Mantella carried so much speed through the Carousel that he ran into the back of Stacy’s Mustang, but although it got the pony car loose, it was Mantella who lost out. The KTM driver lost enough momentum that he was passed by Aschenbach’s Camaro, and he had to get his elbows out to keep Chase’s Ginetta behind him as they ran side-by-side through Turns 8 and 9. Two laps later, Mantella regained third with a great move down the inside of Aschenbach at Turn 4.

The KTM homed in on Stacy rapidly, as the Mustang driver fell some three seconds back from Sandberg, but a brave attempt around the outside at Turn 9 didn’t work, and he briefly ran into the sand, couldn’t get traction as he returned to the racing surface, and thus again gave up third to Aschenbach. On Lap 14, Mantella rubbed his front-right wing fender off as he passed Aschenbach at Turn 7, but he got the job done and was back into third, allowing Chase to train his sights on the big Camaro, with Heckert now into sixth ahead of Plumb.

The race was interrupted on Lap 16, when Marshall’s Lotus came from too far back in attempting to pass Plumb at Turn 9. He tried to slow himself down by running over the inside curb on entry, but smacked hard into the right-rear corner of Plumb’s KTM. Jeff Courtney blinded by flying sand, ripping off the left-front wheel of his Maserati on the back of Plumb’s stationary car. The full-course caution was inevitable.

At the restart on Lap 22, Sandberg got the jump on Stacy although V8 power drew close into Turn 2. On Lap 23, Stacy’s attention returned to his rear-view mirror as Mantella was crawling over the Mustang’s trunk lid. Right behind them, the power vs. handling battle was replicated between Aschenbach and Chase.

Mantella’s outbraking maneuver that had tried and failed at Turn 9 earlier worked, with Stacy leaving just enough room through the ess-chicane to allow the KTM into second. On Lap 24, American muscle took a further hit, as Chase went down the inside of Aschenbach at the Turn 7 hairpin, and nudged the Camaro wide to grab fourth. He zoomed onto the tail of Stacy’s Mustang, but slid wide under braking for Turn 7, while right behind, Heckert’s SIN made a clean pass on Aschenbach to demote the Camaro to sixth.